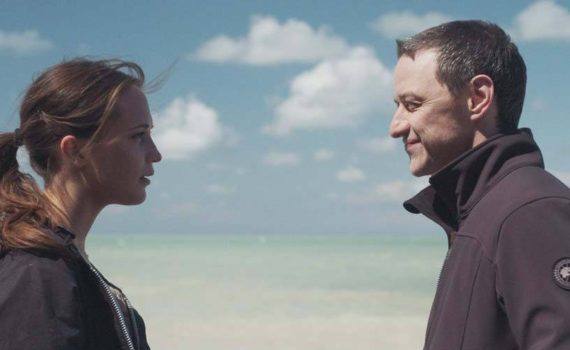 No one has ever heard of Submergence, and there’s a reason; it’s bad.  Starring James McAvoy and Alicia Vikander, you’d think any film with those two incredible talents would be guaranteed gold, but there’s a reason no one tried to tell you about this movie; they understood that the final product wasn’t any good at all, and that they probably shouldn’t advertise that fact.  It’s almost Serenity (2019) awful, if not stupid in that way, but rather pointless in a similar fashion, like a story someone tells that you wish to god would end as soon as possible because it’s so damn pointless.  No feature should be pointless and painful, that can’t possibly have been the goal here; someone just made one giant mistake.

James works for British intelligence, Dani is a oceanic mathematician, and they are about to fall in love.  James’ job is highly classified; he poses as an expert in bringing clean water to Africa, but what he’s really doing is hunting down information on terrorist organizations.  Dani’s job is extremely complicated; she goes deep under the oceans to study the environment there so that humans can better understand the world around us.  Both find themselves at a sea-side resort awaiting their next assignments, and they find themselves instantly drawn to one another.  But the holiday soon ends and their individual lives soon call; what will happen when they are both drowned in their own work and their own problems?

I tried to explain this movie out loud after I watched it and I almost fell asleep standing on my feet.  It’s simply a boring topic, a boring set up, and has nothing to offer audiences apart from a nice love story that’s ruined by everything going on around it.  I’d have much rather watched these two fine actors simply fall in love over the course of 90 minutes, no other story included, that at least might have showcased their talents and made me feel something other than banal boredom.  Wenders in an eclectic director, he tried something too complicated here, and it backfired; I couldn’t have cared less, by the end, what happened to these characters and their love.  McAvoy and Vikander are both great, so stunning, but were never given the chance to shine; if you will allow me a pun, they were submerged in unnecessary material, and so never could draw the breath of life we desperately needed them to find.