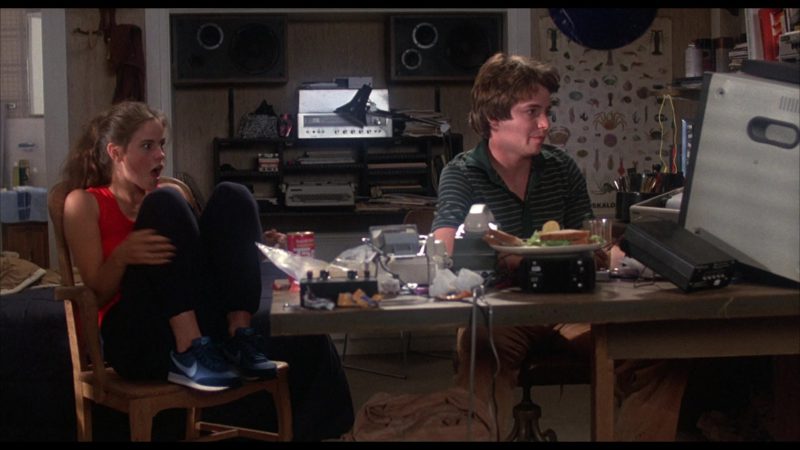 John Badham had some real gems from the late 70s to the early 90s: Bingo Long, Saturday Night Fever, Dracula, Whose Life Is It Anyway, WarGames, Short Circuit, Stakeout, Bird on a Wire, Point of No Return.  He’s a solid presenter of simply story, and I grew up enjoying these films, not even making the connection that they were directed by the same man.  WarGames stands out as the best, becoming an 80s classic that would never be forgotten, and keeping us saying “Do.You.Want.To.Play.A.Game?” almost 40 years later.  It’s a fun film about teenage curiosity that then goes much deeper, into war and attrition and pointlessness, until we begin to understand that this movie has much more to offer than the cuteness of its stars and the coolness of its computers.

David is a bit of a computer whiz, even though home computers are hardly commonplace.  He knows how to access the phone lines to talk to other computers, he knows how to make changes that no one can trace, and he knows how to hack into systems where he’s no supposed to go.  But when he accidentally starts communicating with a military system, which he thinks is a software company, and starts playing war games with it, which it thinks are real, he’ll learn that sometimes you put you hand in a trap when you stick it places it doesn’t belong.  Now, he and his friend Jennifer will have to convince the government that Joshua, a super-smart computer that’s able to learn and just happens to be in control of the US nuclear codes, is planning to launch real missiles at real targets, all because David set it on a path he thought was for fun and doesn’t know how to turn it off.

Before Broderick was Ferris the rogue and Sheedy was Allison the freak, they were typical Seattle teenagers and a potential couple in WarGames, and they played their parts perfectly.  Broderick is so adorable that he couldn’t escape that typecast and Sheedy simply didn’t turn out to be a very talented actress, but they were both great here, and really couldn’t have been more delightful and daring in turns.  The film is fun, as it gives us a horrific problem but also gives us the plucky kids to solve it, in a story that’s both adult and childish at the same time.  WarGames has reached cult status, especially with the help of Ready Player One, which I didn’t like, though I love the entire 80s nostalgia concept.  I was born in ’83, so a lot of my love for the decade comes posthumously, but that helps me appreciate it even more; I kinda lived it, kinda looked back on it right way, and now as an adult I can view it with a clear head.  WarGames is the epitome of an 80s adventure flick, and it’s one that we should always check back on, even its music and its cast are tremendous: Dabney Coleman, Barry Corbin, John Spencer, Michael Madsen, Eddie Deezen from Grease, even William H. Macy in an uncredited role.  Gold as far as I’m concerned, and since nothing gold can stay we should appreciate it while we can still remember it.