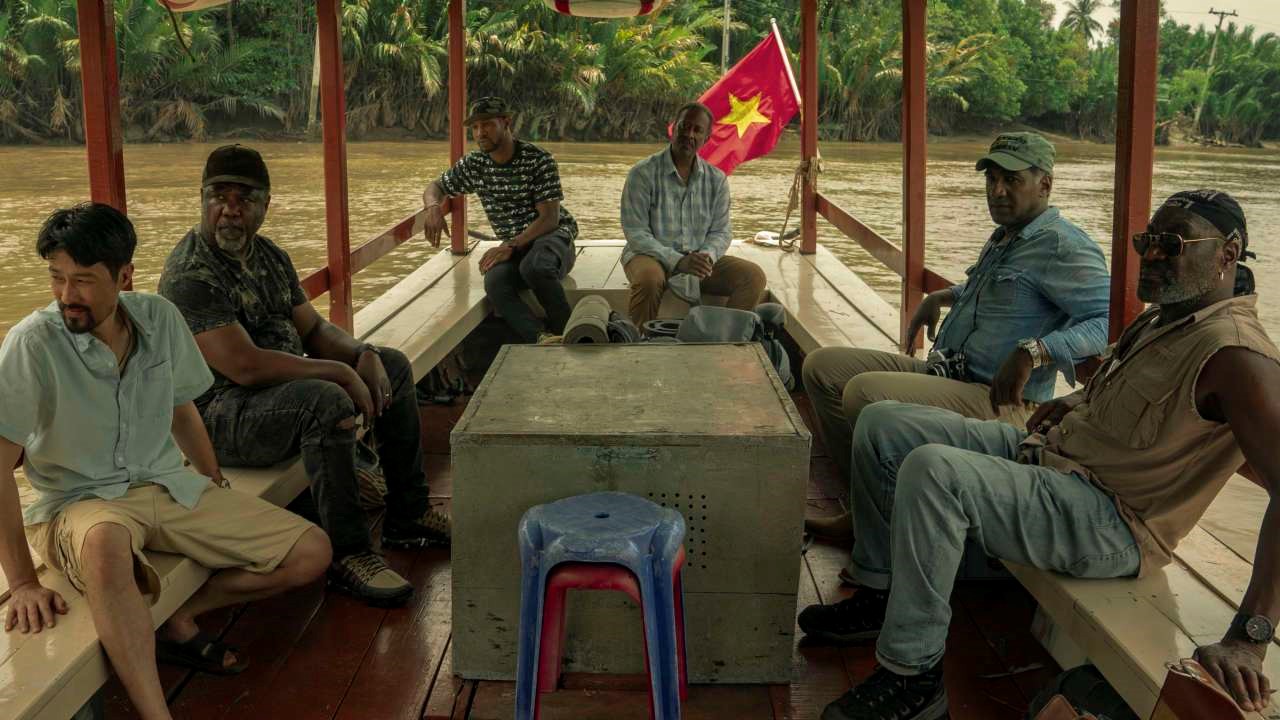 Spike Lee has done better and will do better, believe that, but Da 5 Bloods is a whoops where  BlacKkKlansman was a wow, a clumsy misstep from a director who we know can move much more smoothly.  His messages have never been subtle, but he’s talented enough to pull off being brave, we respect him for being honest, invigorating, and original.  But everyone makes mistakes, and this Netflick is Lee’s.  It’s somewhat rushed, surprisingly clumsy, and never feels like a real film, more like a brainstorm that an artist might have had but wasn’t able to translate fully, or perhaps a melding of ideas that was never going to work as one complete product.  However you dice it, Da 5 Bloods simply isn’t great.

Four friends, all veterans of the Vietnam War, or the American War as it’s called there, have returned to the place they lost their commanding officer in a quest to find his grave, and ultimately bring him home.  Being black men in the Vietnam War was a struggle of conscience, as their brothers back home were being killed in the streets fighting for their rights, while their brothers in arms in the jungle were killing the Vietnamese people in war that the United States had no business being in.  It was a time of confusion, and losing their commander only threw the four friends further into chaos.  Along with the body, the group hopes to recover a trove of gold they buried as well, at the same site and at the same time.  But local politics and ancient wounds will make this mission a disastrous one, and anyone who makes it home with his life will be considered one of the lucky ones.

I’ve seen people proposing that this film can at once be extremely flawed and quite good.  Now, I’m willing to see that, I’d definitely want to see that if I was trying to give the benefit of the doubt to a director who was my personal favorite, or to someone who I knew was trying to get the right message across, even if the delivery wasn’t perfect.  But I have a hard time going that route with this film; I just think it’s too messed up.  The acting isn’t great, the editing is bad, the deaths are ridiculous, the plots are jumbled, Chadwick Boseman feels out of place, and the side characters are distracting: Melanie Thierry & Jeno Reno as the French, Jasper Paakkkonen & Paul Walter Hauser as the sidekicks.  There are like a dozen important roles within the story, a handful of angles within the main plot, and about a hundred different lessons we’re supposed to be learning.  A history refresher, a brotherhood drama, a war tale, a thriller, modern political commentary; this film wears too many hats, and so can’t keep its head straight.