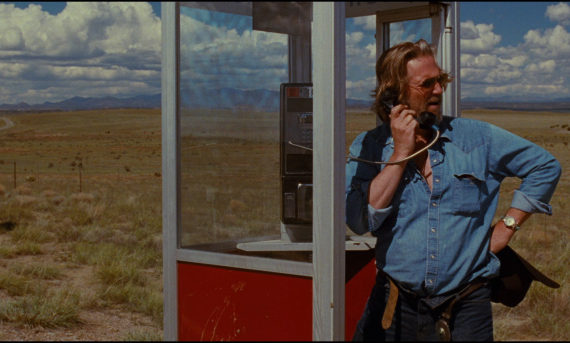 I can’t help comparing Crazy Heart with A Star is Born, which is completely unfair, since the former came out almost 10 years before the latter, and they only have surface similarities anyway.  But, like I said, I can’t help myself, and that doesn’t bode well for Jeff Bridges’ vehicle, since it’s nowhere near as shiny as Bradley Cooper’s.  From the love story to the original music, this movie pales in comparison to others who came after and did it better, I don’t think there’s much doubting that, so it becomes a matter of whether or not there is enough to enjoy despite that fact.  And the answer, to me, is yes, there is enough to hang your hat on when you walk in the door and just enough reason to stay.  Most of that comes down to one excellent acting performance, but sometimes that’s all you need.

Folks call him ‘Bad’ Blake, that’s been his stage name for years beyond count, and he won’t share his real moniker until they carve it on his tombstone.  Which might be coming sooner rather than later; Bad is getting old, getting sick, drowning himself in booze, and wasting away his final years on tour in the middle of desert nowhere, playing at bars for fans who are as ancient as he is.  But that doesn’t mean there’s no time for a change, and that’s just what Blake is about to try out.  When he meets a reporter named Jeanie, who has a cute son and a bright spirit, he experiences love like he hasn’t in quite a while, and it just might be strong enough to make him want to live longer, which would require breaking a lot of terrible habits.  Can you teach an old dog new tricks?  No, but if there’s good deep down inside you it’s never, ever quite gone, no matter how long it’s been buried, and it can still come out to shine.

To start with the problems, the original music wasn’t that good, the love story wasn’t that believable, and most of the cast wasn’t really up to what was asked of them.  That’s a recipe for disaster, but luckily Jeff Bridges was there with one of his strongest performances to date to save the day in style.  He was awesome as Bad, the washed up country singer turned elderly alcoholic who was far too grizzled to every be called beautiful, until he opened his mouth, strummed the guitar, and blew away the crowds.  It was cool to see a pro like this play a pro like that, and if you’ve seen this kind of fictional biopic style before you know what to expect, and what can go right.  Enough did, but just barely; it was a close call.  Gyllenhall was only OK, Farrell was kinda terrible, the songs were weak, and the drama wasn’t super high.  But what the film did right was tell a simply story well, cast a lead actor who could carry the load efficiently, and let the audience wallow in the misery and then in the joy, giving us a solid cinema experience that had more highs than lows.  This was Cooper’s first film, and he would go on to make better (Out of the Furnace, Hostiles), but, for a debut, Crazy Heart holds its own.