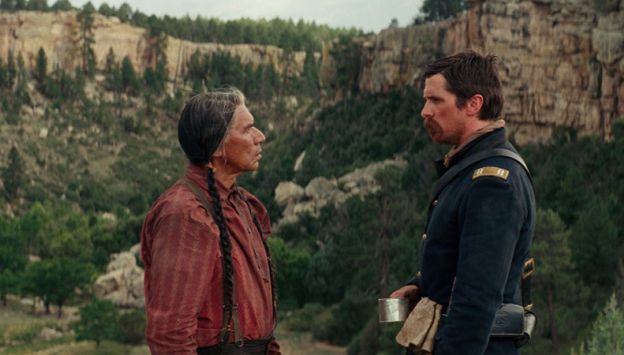 You can feel Scott Cooper’s hand hovering over this film’s mood the entire way through, which I think is a positive for critics but a negative for casual audiences.  His films are Crazy Heart, Out of the Furnace, Black Mass, and Hostiles, the only one he didn’t write as well being Black Mass.  That makes sense because it’s my least favorite of the bunch, so label me as a Cooper fan and let’s move on.  I know some people who aren’t, though; I was told rather vehemently that Out of the Furnace was a terrible, boring, depressing, worthless movie, one that I was crazy to give a solid review.  And that’s my point; Cooper’s vision isn’t for everyone, and won’t comply with your solidified notion of what a Hollywood feature should me.  It’s just that, in my book, that’s a good thing.

Captain Joseph Blocker is nearing the end of his military career with the U.S. Army, after years of hunting down Indians for the government and slaughtering anyone he was told to.  Blocker knows that he is a murderer in a uniform, a savage in a savage land whose only tie to sanity is the chain of command.  His last and most difficult mission is to escort a Cheyenne chief, Yellow Hawk, to his ancestral home in Montana before he dies of cancer, an errand Blocker wants no part of.  He fought against Yellow Hawk years before, he knows what kind of cold-blooded killer the Chief is, but duty calls.  He and a select team of men will head out across dangerous country, following the trails to the Valley of the Bears, protecting a dying man along the way, witnessing one more time the terrible tragedies that await anyone who takes a moment to blink, sleep, or feel.

I would say that Christian Bale is such an excellent actor that he can do no wrong, but that wouldn’t be exactly accurate; he has made plenty of bad film choices in his career, and I’m sure he’ll make more going forward.  But Hostiles isn’t one of them; this is one of his great successes, if an extremely understated one.  His role here showcases a restrained demeanor, a deliberate form of acting that can turn some audiences off, but did the opposite for me.  Bale is perfect for Cooper’s style, able to play a character with quite strength so well, able to share the goals of his director and lead the film down the exact right path.  His co-stars were all in as well, the entire group succeeding in smaller ways: Pike, Studi, Stephen Lang, Jess Plemons, Timothee Chalamet, Adam Beach, Peter Mullan, Ben Foster.  The cinematography was beautiful, the Western atmosphere was spot on, and the raw brutality of the time was firmly captured.  The story tended to be a little redundant and unsettling, but then so was the West; an ‘A’ for accuracy.  This isn’t a film for everyone; it’s quite heavy and crafted in a very specific way.  But count me among those who like it anyhow, and count me in to watch Cooper’s next project, Antlers.  It’s a horror movie done in his natural, dark style; should be a rousing good time.