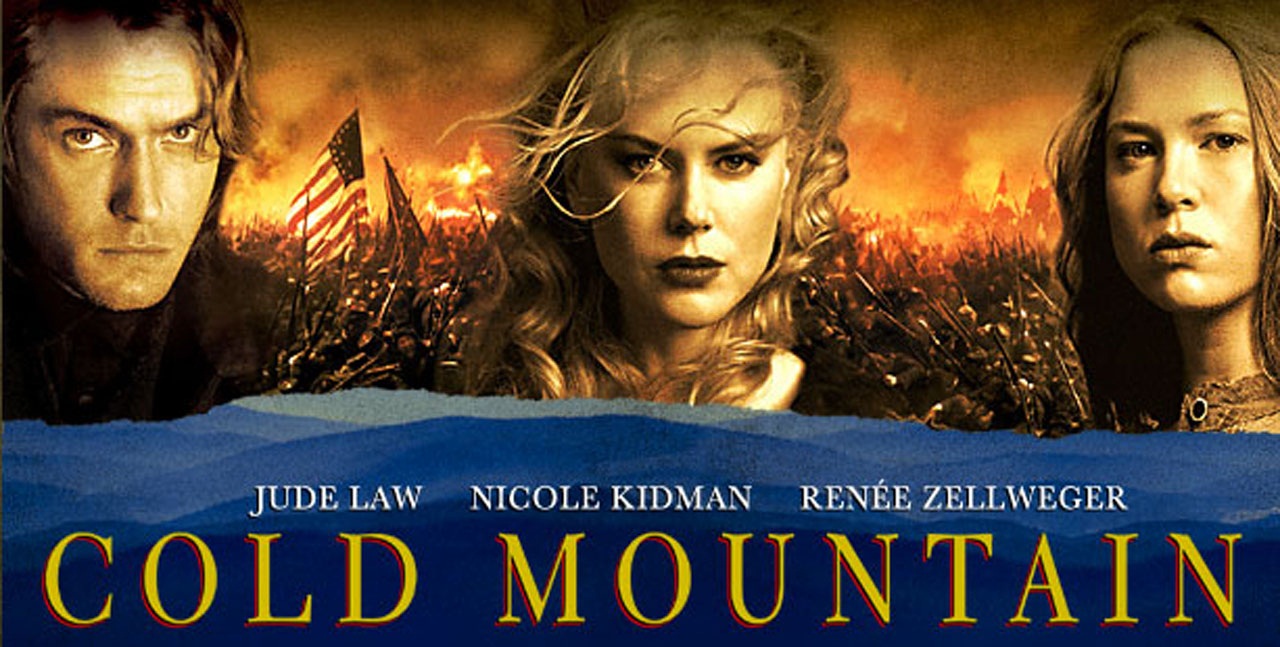 From 1999 to 2004, Jude Law was an unstoppable force and Hollywood’s leading heartthrob.  The Talented Mr. Ripley, Enemy at the Gates, AI, Road to Perdition, Cold Mountain, I Heart Huckabees, Sky Captain, Alfie, Closer; he just pumped out the hits, and if not every single choice was an incredible success, I remember just how huge a deal Law was, and just how his name connected to a film was enough to make everyone run to the theatre to see it.  Out of those from that era, Enemy at the Gates is my personal favorite, that movie just does something to me, but they were all impactful as 21st century film began.  Come to think of it, Kidman & Zellweger were in their prime as well, creating a trio for this movie that can’t be denied and ought not be forgotten.

As the Civil War descended upon Cold Mountain, North Carolina, not a single life escaped unaffected.  Ada Monroe and her father the reverend had just come from a glamorous life in Charleston to a simple one in the hills, but the people there greeted them with open arms.  Inman, a hard worker if not the most talkative young man, took a shine to Ada at once, and the two seemed on their way to an unlikely romance.  But war broke out, able-bodied men signed up, and Inman was off to fight for rich men he had never met and ideals he didn’t share.  Although they didn’t know each other well, those fleeting moments on Cold Mountain would stay with the couple, and after a wound took him out of action, Inman would vow to return to the woman he loved, no matter what tried to stop him along the way.  Ada had her problems back at home, but she never stopped writing to her man, nor did she ever give up hope that someday he would return to her.

It’s a beautiful romance above all else, with a poetic charm to the story that really brings the book to life.  I’ve read it, it’s quite good, and both the sadness & the hope that was written there truly comes to life in this film.  Ada & Inman are star-crossed lovers in a way, though they’d hardly spoken a dozen words before they were parted.  Their story is the story of a land torn in half, battling against itself for very little reason.  There isn’t much war in the film, actually, though there is plenty of vicious action along Inman’s journey back to Cold Mountain, a trip that introduces us to a hundred loathsome characters.  That’s actually a major highlight of this movie, the amount of impressive cameos packed into an epic timeline: Brendan Gleeson, Philip Seymour Hoffman, Natalie Portman, Giovanni Ribisi, Donald Sutherland, Ray Winstone, Kathy Baker, Charlie Hunnam, Jack White, Ethan Suplee, Jena Malone, Taryn Manning.  All these quality actors, some great original music, a landscape to die for, awards galore; Cold Mountain is a pillar of its genre and a film that should be respected.