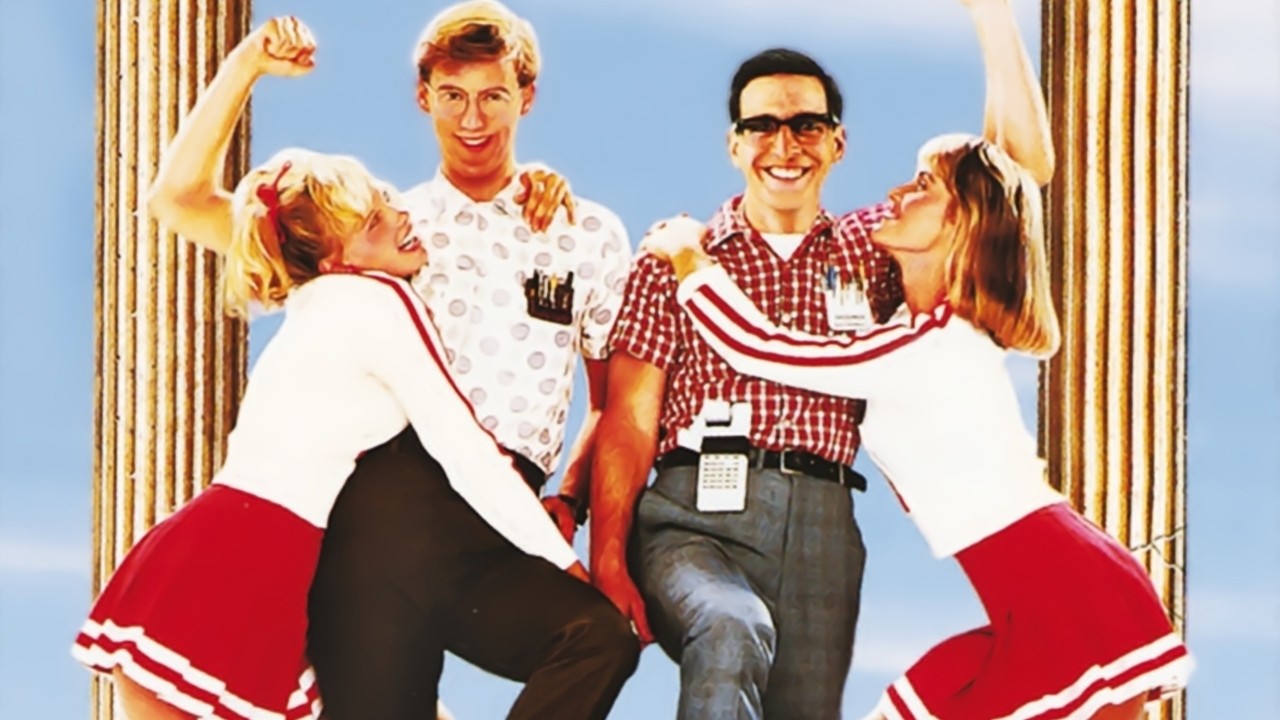 There aren’t too many cult classics that reach the same level as Revenge of the Nerds.  Although, really, there aren’t too many movies that compare to Nerds in any way, as it’s a priceless gem of a film on a pedestal all its own.  At least I think so, if most major critics do not.  Its Metascore on IMDb is 4/10, writers from large newspapers like The New York Times finding it devoid of comedy.  But that’s the wonderful thing about Nerds to me; the fact that it can not be funny and still be hilarious, not be PC and still make a poignant point, not be about the beautiful collegiates and still come across of insanely lovable.  Some people like Animal House, some people like Porky’s, but for my money, Revenge of the Nerds is the scrappy school chum classic to watch and to adore.

Best friends and computer nerds Lewis & Gilbert are off to Adams College, home of the Atoms, as they embark upon their journey to manhood.  This pair of awkward intellectuals don’t know how to talk to girls, how to join a fraternity, how to avoid the jocks, but they’ll learn, or else they’ll humiliate themselves trying.  After losing their freshman housing to the Alpha Betas, a brotherhood of football players, the dorks are forced to live in the gym until other lodging can be found.  Well, that’s no good, so they set out to fix the situation themselves, renting a dilapidated house that just might make a good frat headquarters.  First, they’ll need a Greek organization to sponsor them, then they’ll need to win the Homecoming Carnival in order to get their foot in the door of the council.  But jocks hate nerds, they fight back, and Adams College will never be the same.

Carradine & Edwards as Lewis & Gilbert are about the most adorable duo of nerds you’ll ever see.  They like robots, pocket protectors, and dumb jokes, but they both have hearts of gold, something that shouldn’t be dismissed as a reason to dig this movie.  Another reason is the rest of the nerds, a hodge-podge of misfits from a child genius to a clueless violin player.  The Tri-Lams are all of us, in a way, as are their sisters the Mus, giving everyone something to relate to.  Then there’s the Carnival, which is the highlight of the film, how our heroes attempt to win against the unbeatable Alpha Betas.  A classic David v. Goliath story, yes it’s simple but it’s also wonderfully meaningful.  Throw in some co-ed boobs, some douche & jockstrap jokes, and some Asian humor that wouldn’t fly today, and you’ve got yourself a surprising winner, a film that has become a cult hit and actually deserves it.

HA! We have to watch this together. I don’t know that we ever have, and this is a favorite from high school. How did I not know that you like this movie this much?!?!