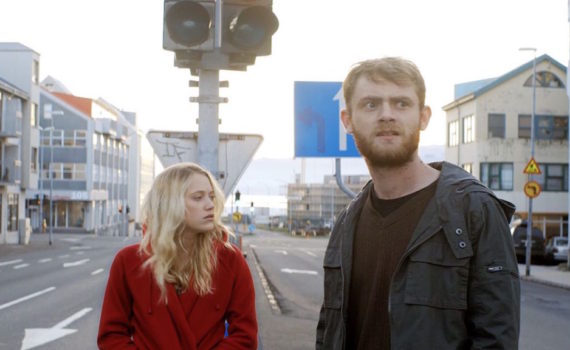 Bokeh is a method of photography where the image in the foreground is clear, but everything in the background is out of focus, often producing those big circles of light that some amateurs find so attractive in pictures.  It’s an apt metaphor for the subject of this film, and a clever one at that, but the title is probably the best part of the movie.  For the rest, Orthwein & Sullivan co-wrote and co-directed a clunker that can’t possible have an audience, that fails to have a voice that would speak to very many.  There is an emphasis on photography in the movie, both within the story and as a theme, so the visuals are predictably excellent.  But that’s where the positives stop, the content of the film lacking in almost every other area.

Jenai & Riley are dating, in love, young & passionate, starting their lives together.  Riley takes them on an amazing trip to Iceland to witness the stunning natural beauty and for the country to act as a backdrop for his love of taking pictures.  He doesn’t go in for digital, he wants to capture the imperfections of the world as well, he & Jenai touring the land while he captures its essence on film.  One morning, when the pair goes out for breakfast, they find that everyone in the town in which they are staying has vanished.  Calls home go unanswered, the internet isn’t being updated, no one drives the streets, it’s as if every living human has disappeared over night.  Alone together in a strange place, the duo will have to decide what to do with their lives, how they will go on living, and what it all means.

The concept is fascinating; what would you do if you were all of a sudden inexplicable alone?  Would it make it better if a loved one was with you?  How much would loneliness affect you?  There’s that sci-fi element to the plot, like Z for Zachariah though not as good, but then, also like that film, there is a metaphorical element as well.  What do they represent, how is their struggle our struggle, what can we learn from this?  All these question make the movie interesting, but I think it w0uld have worked better as a book.  Basically, the film was beautiful to see, but painful to watch.  Monroe was acting-class level in every scene, and it only got worse every time she was asked to inflect her voice.  O’Leary was only slightly better, playing his character one-note to a fault.  And they were it, there really aren’t more actors, and they failed miserably to come across as competent adult performers.  The story quickly became boring anyway, they weren’t aided by the writing, but the acting was the real nail in the coffin, and I can’t in good faith recommend this movie to anyone.