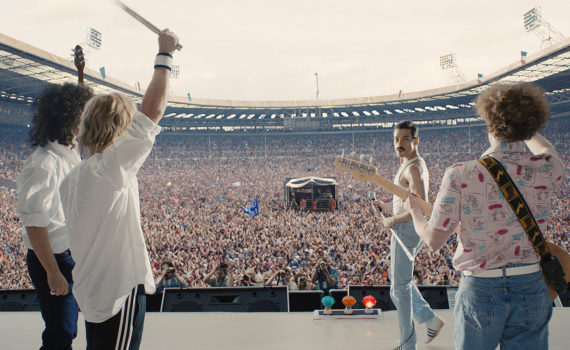 Musical biopics are a dime a dozen, and may be worth even less than that, typically fueled only by their knowledge of our love for the artists that they exploit, filled with self-satisfying propaganda that would be more despicable if it weren’t so obvious.  I’m definitely not a fan, not generally speaking, although a few have come along, funneled through the genre, that have impressed, so I won’t say I have an across-the-board hatred.  But Bohemian Rhapsody is decidedly not a film to spark love from those who watch the style of these manufactured movies with a critical and doubtful eye; rather, it’s the exact opposite, a feature that should throw up red flags with even the most amenable of audiences.  Simply put, it just doesn’t do its content justice and can’t break out of the mold of its style, which is neither shocking nor damning, it’s just the truth,

Farrokh Bulsara was born in Zanzibar and raised in India, where his parents enrolled him in a British boarding school.  There he learned piano, founded a band, and began calling himself “Freddie”.  Later, after his family moved to England, Freddie would study art & design and join a broken band in need of a singer; they would call themselves Queen.  This was the genesis of a genius called Freddie Mercury, and one the the most popular and famous rock bands of all time, be it in the UK or in the States or throughout the entire world.  Queen was experimental, they pushed boundaries, they answered to no one, and they were something special, until the group broke up when Freddie decided to go solo.  He was battling so many demons at the time; confronting his sexuality, dealing with depression, weaving his way through the dangers of fame, and ultimately contracting AIDS, the disease that would lead to his early death.  But Queen made their impact, sang their songs, came together to give us all something wonderful, and none of that would have happened without the man known as Freddie Mercury.

It would be dismissive to say that all biopics about musicians are the same, but it’s also ridiculous that directors keep pumping out the exact same storylines/morals/feelings/arcs and keep expecting us to be equally engaged every single time.  It doesn’t work that way, something has to change, and Bohemian Rhapsody isn’t the original hit we needed.  Love & Mercy is a very specific look at something important; this movie couldn’t achieve that, and instead became just another shoddy try.  Sure, the parts where we hear Queen music are good; Queen made good music.  But that’s what CDs are for; we’re supposed to get more from cinema.  But all we got was sped up history, contrived jam sessions, and not much worth holding onto.  If you give it time, the story grows on you, but that’s not exactly praise, and this isn’t exactly the film that a band this legendary deserves.  It felt rushed to the shelves, like they couldn’t wait to make sure the product was quality, it only mattered that it was available.  Well, Bohemian Rhapsody is available, and Malek’s rendition of Mercury is worth notice, but the rest fails to work on almost any level, and the best that can be said about this project is that it’s never a terrible time to listen to excellent music.