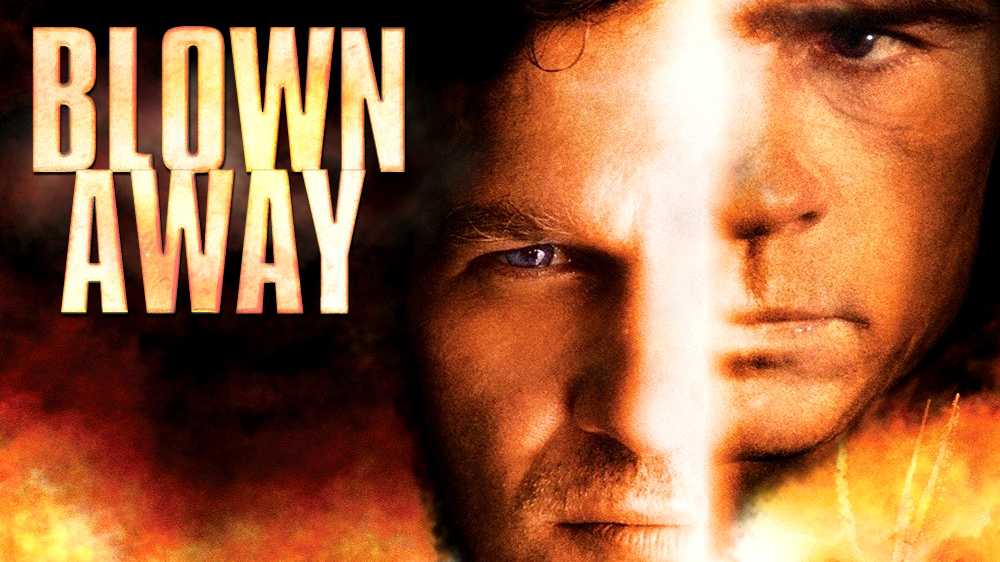 Blown Away is batshit crazy, and it’s mostly because of the terrible accents on painful display, from Boston to Ireland and everything made up in between.  If ever an accent coach was needed for a movie it was here, and probably an acting coach too, and maybe a directing coach.  Honestly, I’m not sure what held this film together other than duct tape and hope, or maybe simply the love audiences have for blowing stuff up.  It’s a plot that’s ridiculous, an execution that’s laughable, and yet it’s an icon of the 90s; maybe that just tells you all you need to know about a pretty daffy decade.

Jimmy Dove is a bomb squab expert in Boston, defusing devices and situations with ease, but the pressure is weighing on him, and he decides to hang up the wire cutters to get married and start a family.  But a ghost from his past quickly brings him out of retirement, when a psycho begins targeting squad members and always seems to be one step ahead.  And it’s not just any killer, it’s a man from Dove’s distant memory, when he went by a different name and lived in Belfast.  His past crimes have caught up to him in the form of Ryan Gaerity, an evil live wire who will stop at nothing to get his perceived justice, even if it means murdering Dove’s family to do it.

Blown Away is basically Backdraft in a different city, a story of fire and fury that you really shouldn’t look too hard at, because you’re bound to find holes.  Talk about jumping the shark; this plot is so insane there’s no way it stands up today, and I’m not really sure how it got off the ground in ’94, other than by the skin of its teeth.  Well, maybe by its actors, who are obviously talented, although you wouldn’t guess it if this was the only movie you’d seen them do.  Bridges, Jones, Whitaker, Lloyd Bridges, Cuba Gooding Jr in a small role; these are talented professionals, this was just an odd project.  It’s all over the place, it’s so dated, it’s a mad house of action and intrigue, but it really does represent the genre and time well; there are others that were just as wacky, like Speed, Point Break, FaceOff, The Rock.  For the era, Blown Away isn’t too bad, it’s fun anyway, but measured evenly it’s pretty awful, full of farce and over-acting to the point of distraction, but hey, it was the 90s, anything goes.