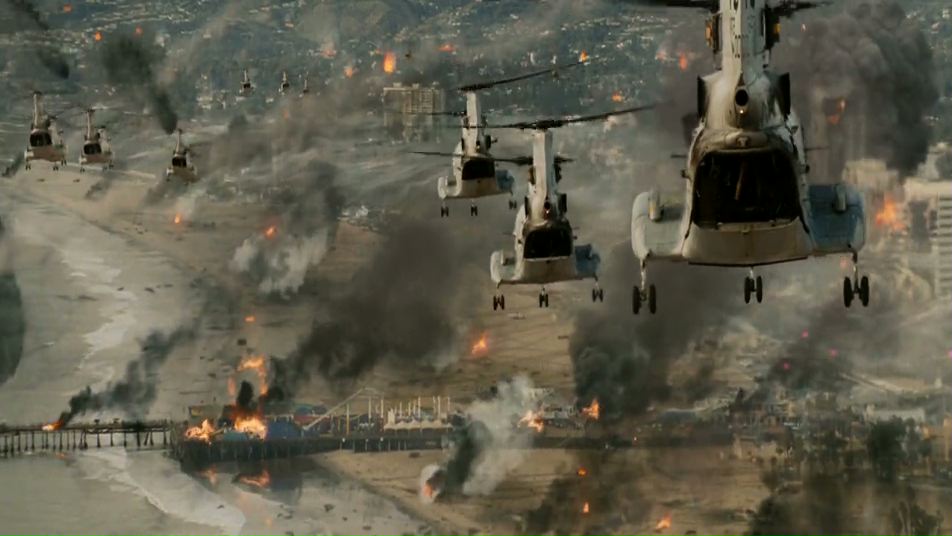 I’m not exactly sure what I was expecting from this movie, but definitely not a promotional video for the Marines.  Battle: Los Angeles is propaganda, not film, and I say that completely apolitically; it’s a long commercial rather than a solid movie, and that sucks.  I guess what I was looking for was alien sci-fi done well, if a little heavy on the cheese; I don’t mind that, not really.  But what I got was a loud OORAH! and not much else, with actors that were incapable of lending a hand to a struggling plot that quickly turned into a dying story.  Independence Day this is not, it couldn’t even aspire to that silly level, and that’s a real problem.

The world is at war with an other-worldly foe, and we’ve already lost.  An alien attack has been launched near every major, ocean-bordering city on Earth, and the results were catastrophic; our militaries were almost immediately overrun.  Their tech is better, their armor is tougher, their tactics are impeccable, and it looks like we’re going to lose our planet.  Just 24 hours earlier, a squad of US Marines was called into Santa Monica to assess this new threat, and to evacuate any civilians that might need their help.  Now, they seem to be the only team behind enemy lines, and almost accidentally they have the chance to strike the brain of the operation, turning the tide of the war and giving hope to all mankind.

It is definitely a dumb plot, but it’s made even dumber by its delivery, and, my god, by its acting.  First, it’s nothing more than advertising, and that’s annoying; it doesn’t even attempt to look like it’s only trying to be accurate in its depictions, it flat out owns the fact that it wants to make shooting guns look cool.  The rest is an afterthought, any quality in the storytelling quickly abandoned because the filmmakers found that kind of crap to be unimportant I guess.  The graphics are terrible, the action is sloppy, everyone just runs around screaming and/or blowing shit up; it’s either a nightmare or a wet dream depending on, what, how much your love ‘Merica?  And then there’s the acting: Aaron Eckhart, Michelle Rodriguez, Bridget Moynahan, Michael Pena, a young Joey King, an utterly pointless Ne-Yo.  I’m almost offended by how bad this movie is, like it’s a personal insult to me and to sci-fi nerds everywhere; please remove it from the genre, because it sure doesn’t belong.