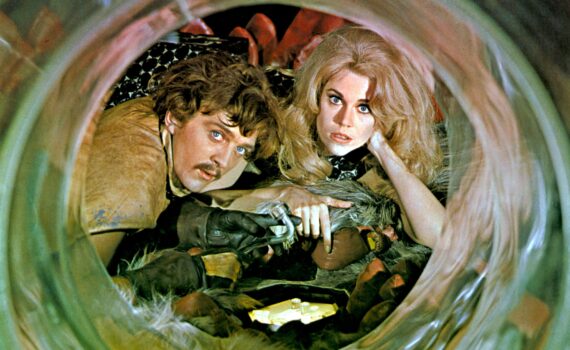 One of the most audacious, salacious, and scandalous films of our time, Barbarella is not just a cult classic, but also an icon of the era that both shocks and awes.  From the first scene, that monumental zero-G disrobing, audiences understand that they better buckle up, because they’re in for a wild ride, and that there’s no telling what (or who) might come next.  This is what makes Barbarella so insanely memorable and remarkable; the stream-of-consciousness activity, dialogue, and plot, muddling our minds until we really couldn’t guess where the story will take us, or who our heroine might encounter.  Somehow I might be in love with this movie, more than I love this movie, which makes no sense, but this is definitely a film that doesn’t give a damn if sense was made or not.

Barbarella is a space adventurer many, many years in the future, during a time when all the known worlds are at peace, have tranquility, and have put aside silly notions like war, sex, hate, passion, and violence.  But her newest mission will teach her that there are still those among the stars who practice the baser ways of the past, and that there are still dangers out beyond the reaches of civilized space.  A scientist named Durand Durand has gone missing on a distant world, and he has taken with him the Positronic Ray, an invention that could bring evil and death back into the galaxy.  Barbarella’s mission is to find Durand Durand, locate his weapon, and ensure peace, but the cultures and characters she meets along the way will show her that she still has so much to learn about human interactions and failings.

There are few moments more iconic, few roles more cinematically important, few films so lasting and gigantic, than the ridiculous escapades of the lovely space explorer Barbarella.  It’s such a silly movie, and it might seem grandiose and absurd to categorize it this way, but watching it back, reliving its scenes, hearing its iconic lines, seeing Jane Fonda inhabiting this exquisite creature, there’s nothing you can do but be in awe of what these filmmakers were able to accomplish and give to us.  This bonkers base is what later creativity used as a springboard, and we should all thank it for being so bizarre and experimental, because it definitely birthed more of the same.  Fonda is so sexy, the music is so Mod, the sci-fi is so stupid, and there are a millions lines to quote because they’re so one-of-a-kind (because why would anyone else say that?!); this film is special in one of the most unique ways a film can be special.  Barbarella is marvelously mad, and that’s good enough for me.