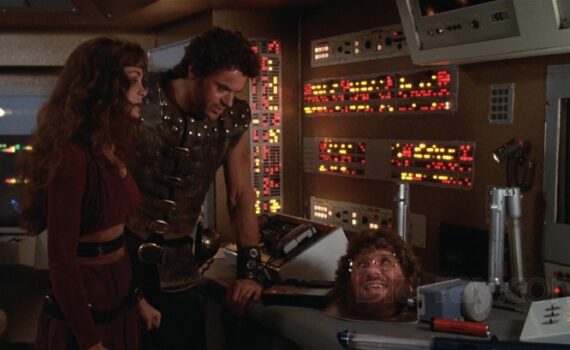 Well …huh.  I guess you should say hello to Barbarella, History of the World, Errol Flynn, Mel Brooks, the Crusades, Westerns, swashbucklers, pirates, sci-fi, pretty much everything you’ve ever seen, because Ice Pirates has it all, absolutely every piece stolen.  This is one of the most bizarre, confusing, hilarious, all-over-the-place movies you will ever see; just when you think you’ve gotten tired of it, it’ll amaze you with something you thought was simply too dumb to try.  Really, this film is too dumb to exist, but here it is anyway, and you will definitely laugh out loud, even while you tell your family that you just watched the worst moving picture in history.

In the future, humanity will fight for resources, one more than any other; water.  Most is controlled on one planet by one power, the Templars, who do not give it freely.  So, bandits have emerged to steal the huge blocks of frozen water from the Templar cargo ships, and these ice pirates are a thorn in the side of their totalitarian control.  One charismatic rogue, Jason, comes across a princess while he’s thieving, and finds himself part of an adventure to find a hidden world where water is abundant.  He & his mates go on the run from the Templars, whose robot army is nigh unstoppable, and will follow them into all corners of the known galaxy.

Wow there’s a lot to digest here.  First, this is one of the worst things you will ever see, that’s a given.  It’s actors you know romping around doing nothing recognizable, with a frantic pace that makes your head spin, and a plot that must have taken five seconds to write.  This is bad, bonkers, batshit, whatever you want to call it, and there’s simply no excuse for its existence or its theft from other movies.  But somehow it gets stranger; there is a scene at the end, the climax, that you will have to see to believe, it’s that off the wall.  You’ve seen weird before, but Ice Pirates pushes all boundaries, until it takes the proverbial cake, jams it in its own mouth, and chokes us all.