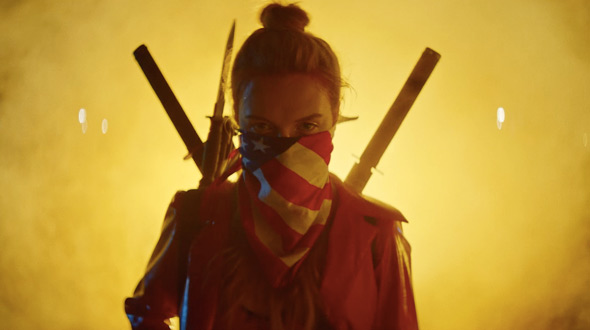 Funny story; I met a guy at a wedding who is friends with Cullen Moss, the actor who plays the mayor in this movie.  They were in the same comedy troupe, and the guy I met got to be in some photos with Cullen, whose character is seen in racy shots with another man.  They weren’t even on set, the filmmakers just called Moss and asked him to take some dirty/funny pictures and the two friends obliged.  So I had that story in the back of my mind as I watched this film, which gave it a personal touch, helped in my enjoyment, and will hopefully help in yours.  Not that Assassination Nation really needs it; the story is strong enough to support itself with enough original content to see it through to the end, if with a couple small missteps along the way.

Four friends help each other through the roughest parts of adolescence in a town called Salem, a place like any other with the typical problems and people and preppies.  Lily, Bex, Em, & Sarah help each other through it all, supporting one another when the going gets tough.  And the going is about to get real tough, not just for them, but for every single inhabitant of this unlucky town.  A hacker breaks into the phone of Salem’s mayor, revealing his sordid life, and the fallout is astronomical.  But that’s not the end of it; next is the vice principal, then some popular kids, then the whole school, then the whole town.  With every dirty secret out in the open for every open eye to see, no one’s reputation is safe, and somehow our four heroines find themselves at the center of a societal collapse where they are the target of every vigilante.

Assassination Nation is basically Men, Woman & Children meets The Purge, and that’s not too shabby.  Men, Women & Children is not the perfect movie, but it was kinda groundbreaking, for a film most people haven’t ever heard of and that starred Adam Sandler.  I’m serious; it’s sexual, it’s provocative, it’s modern, it asks questions, and it examines our use of technology, even putting texts across the screen in a way that I don’t remember seeing before but has since quickly become the standard.  Assassination Nation is a take on this same idea, but with a violent streak that caters to those who are looking for a little more blood.  It’s also a major critique on our current culture, on sexism, on privacy, on so much more, to the point that it’s a little overwhelming.  The movie does get to that point, where it becomes a bit too much, and it does start so much better than it ends.  But taken as a whole, it has loads to say; it’s a darker tone than, say, Eighth Grade, and also not as good, but definitely worth your attention.