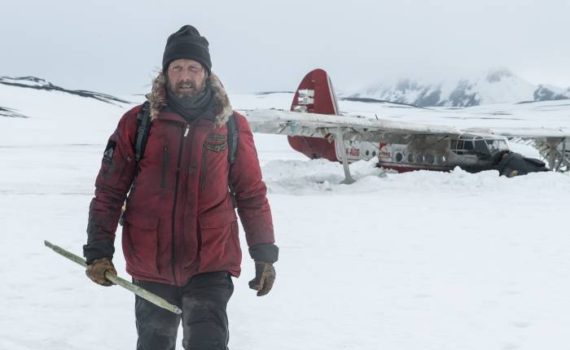 Two Mads movies came out this year, both with chilly titles, Arctic and Polar, but only one is worth your time.  Only Arctic is really about cold places anyway, Polar is about god knows what; I’ve seen it and I still don’t understand.  Mads has been delivering premier performances for a while now; Americans first became aware of the Danish actor in 2006 when he starred as Le Chiffre in Casino Royale, Daniel Craig’s first undertaking of the James Bond role.  Since then, the sky’s been the limit: Valhalla Rising, A Royal Affair, Age of Uprising, The Salvation, Doctor Strange, Rogue One.  The man, the myth, the actor everyone wants to be friends with and is also kind of intimidated by; Mads Mikkelsen is a Norse god sent to teach us how to enjoy movies again, and boy is he succeeding.

A man named Overgard is stranded in the Arctic after a plane crash, alone but not helpless, surviving on his wits and skill, hoping for rescue.  He knows the terrain but also knows he’s safer inside his downed plane; a trek across the frozen wasteland might spell his death.  So he stays close to the crash site; ice fishing, trying to catch a passing signal, scratching out messages in the snow for an imagined rescue attempt.  He thinks the day has finally come when a helicopter comes in low during a storm, but it only crashes as well, leaving him stranded anew, but this time with company.  A pilot survives and is now Overgard’s responsibility, as she clings to life battling a dangerous wound.  The time might finally have come for him to make his dangerous dash toward humanity, in order to save his new ward and his own sanity.

Mads is the man; my man Mads!  He’s seriously one of the better actors in Hollywood and he’s not even American; I don’t mean that to sound dismissive of foreign language actors, I just want to note how fantastic it is that he’s so incredible here and how much better he’s making US film culture.  It makes me want to be a Dane so I could appreciate him from that perspective too; I want a 360 degree look at Mads so I can love him all the more.  He single-handedly takes this movie to the finish line, and subtly, quietly, pulls off some incredible work.  The mood is so heavy, so sad, but he makes it seem believable and personal at the same time, like we’re right beside him rooting for him to live.  Polar is wacky, don’t watch that one, but Arctic is superb; a great survival flick that packs emotional punch and needs no frills to hold our attention.