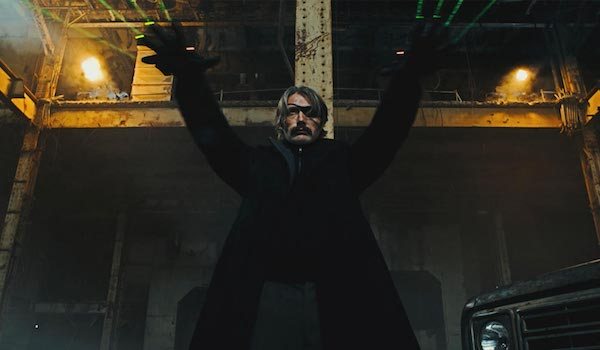 I have a job as a DVD reviewer for a website, and that has afforded me the opportunity to see some god-awful movies, discs that absolutely no one has seen and that no one should ever have to.  But I don’t think that’s a terrible thing; I think in order to be a critic you’ve got to watch the bad to recognize the good.  Jason Lee said it in Vanilla Sky: without the bitter, the sweet ain’t as sweet, and those are words to live by if ever there were any.  So my job has given me some insight into the less-talented zone, which helps me understand when I see greatness instead, but often those films are bombs you see coming a mile away, starring complete nobodies, made without a single penny, like an off off off off Broadway show.  Polar should have been better but wasn’t, has no excuses, and won’t get a pass from me just because I’ve seen equally terrible.

Hit man Duncan Vizla, known as the Black Kaiser, is set to retire and finally bank all the cash he’s been accruing over the very violent years previous.  He’s turning 50, has tired of the life of a killer, and will take his millions into isolation in order to forget about all the terrible things he’s done.  But it’s not that easy, you just don’t step away without consequences, even if leaving seems simple.  His boss, the disgusting pig Blut, has other ideas, and wants to take Duncan’s hard-earned wages as his own.  If Blut can kill Duncan before his birthday, the money goes to the company, since Vizla has no named family or heir.  So here comes a band of hit men and women to kill the best among them, and that won’t end well of course, since they are all trained murderers, all capable killers, and just love spilling blood, no matter the pay scale.

It’s obvious what Akerlund was going for here, but that doesn’t make it any more digestible.  Honestly, my stomach was queasy from the get go, and I’m used to this sort of movie, this absurd and over-the-top shoot-em-up sensationalist style that gives us too much for a reason.  And I understand that reason, I really do, might as well go all the way if Hollywood can cash in on teasing, but that didn’t make it any more enjoyable.  Blood, boobs, abundant torture, unnecessary firefights; I’ve seen it before, will see it again, but perhaps not this flippantly, without any real reason to sit there and swallow it.  There was no reason to subject yourself to the filth, no reason at all, and so you end up resenting the filmmaker for making you.  Terrible acting, a stupid plot, odd casting choices, and more raw flesh then you’ll ever hope to see in a lifetime, Polar exhibits only the negatives this genre has to offer, and not enough of the positives to make the difference.  Mads is the man, Ruby O. Fee is hot stuff, Richard Dreyfuss makes an odd cameo, there are laser guns, and not all is completely abysmal.  But there is definitely no reason I would recommend this movie and no one I would recommend it to; I almost turned it off a few times, and perhaps I should have.