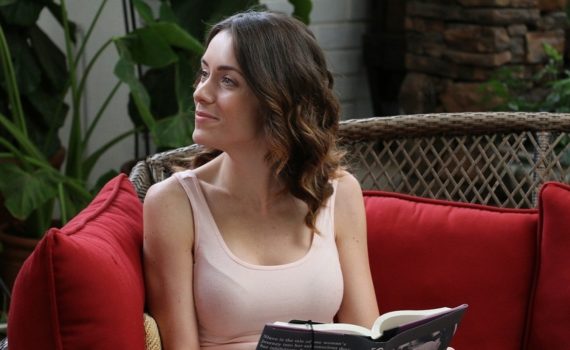 I thought this was going to be a movie version of Submission, a Showtime mini-series in the vein of Fifty Shades that explores sexuality and kink.  I thought right in a way, and extremely wrong in another way; it’s complicated.  This is a film version of those six episodes, it is a Fifty Shades-style love story with bondage in the background, and it is actual footage from the show, re-edited for cinematic format.  But (and this is big) they cut out all the sex.  Why, you ask?  I have no idea, and the result is exactly what you would expect if they had done the same with Anastasia & Christian; the absolute worst thing you’ve ever seen.

Ashley is in a dead end relationship that’s also sexually frustrating; she’s never been a risk-taker but it’s finally catching up with her, and she just knows she won’t be happy until she makes a change and ventures out.  She moves in with two other young women, it seems like it might be fun, and she gets an easy job as a barista.  There she meets a cute, funny guy, but after a one night stand he’s simply not doing it for her.  At the same time, her friend introduces her to a romance novel with a some bondage/dominance worked in, and that does it for her just fine, but it’s all a fantasy, right?  It quickly becomes much more real when she meets the author, starts a relationship with him, and begins to learn so much more about herself.

If what you’re looking for is Fifty Shades, Submission, or anything else in that “guilty pleasure” genre, then American Kamasutra is not for you.  It’s literally, LITERALLY, a sexy show cut down to eliminate all the sex and leave only the terrible acting.  I kid you not, that’s exactly what it is and no more; you will not be pleased.  Romance novels are super in right now, very hip, and this premise seems to fall in line with those stories; rigid lady, sexy hunk, he knows her like no one could, she learns to understand herself, love blossoms.  And that’s all good, but, again, that’s not what this movie is.  It’s like porn with only the dialogue; imagine that and you’ll understand just how horrible a film can possibly be.