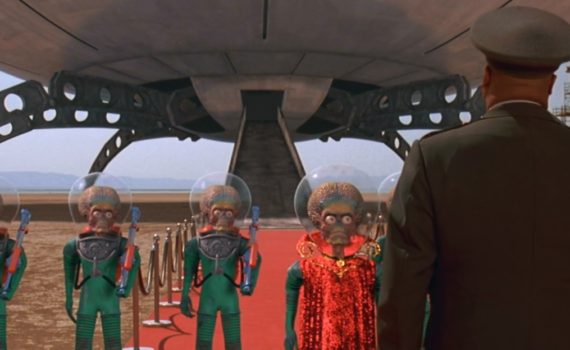 Mars Attacks was one of the very few Tim Burton features that I had somehow not seen, its cult status making it even more of a blind spot than it would have been anyway.  I figured, with this huge of a cast, with this great a director, with this large of a fan following, how could I go wrong with a funny farce about marauding Martians?  Well, maybe this story isn’t for everyone, maybe I had to have watched it 25 years ago, or maybe I was simply not built to enjoy this movie, because boy did I not enjoy this movie.  You’re supposed to laugh during comedies, right?  They’re supposed to be funny, I assume?  I didn’t crack a smile during the torturous 100 minutes of this film, and I simply don’t understand how anyone in their right mind could think this idiotic adventure was a hit.

It turns out we’re not alone, as the whole world is about to find out, and the news won’t be broken gently.  Our planet is quickly surrounded by spacecraft from Mars, it seems they’ve been hiding there for some time, and we just aren’t prepared for their arrival.  They seem to come in peace, but at every meeting our side ends up dead, and it sure seems like they’re just playing some sort of game with us, toying with our emotions.  But don’t worry, POTUS is on the job and his generals are behind him, though Americans keep dying by the hundreds as the little men from Mars shoot us with they sonic ray guns and destroy our cities like knocking down Lincoln Log houses.  It’s either the end of the world or the end of humanity; fate has decided to kill us off with a laugh and a kick out the door.

OK, whoa, here we go.  First, this movie is based on a set of trading cards from the 60s, and that’s cool, I can see that, I get the drift, the aliens and their guns and the government and the Cold War and all that, I’m fine with all that jazz.  And I get that the film is a farce, a spoof, an over-the-top escapade, like Spaceballs or The Holy Grail; goofy to a fault but always with an eye on fun.  Then there’s the cast, which is awesome: Jack Nicholson, Glenn Close, Annette Bening, Pierce Brosnan, Danny DeVito, Martin Short, Sarah Jessica Parker, Michal J. Fox, Tom Jones, Natalie Portman, Jim Brown, Pam Grier, Jack Black, Ray J, Christina Applegate.  BUT (and here’s the problem), I didn’t crack up once.  Nothing is funny about this film, absolutely nothing, it’s only ridiculous, never smart, and at the obvious times when audiences were supposed to find humor, even gallows humor, in the situations, the premise & the execution & the over-worked wackiness were only in their own way, never cleverly designed to make me laugh.  I would not have enjoyed Mars Attacks less were I being physically tortured at the time; as it was, the bash my taste level took was grievous enough.