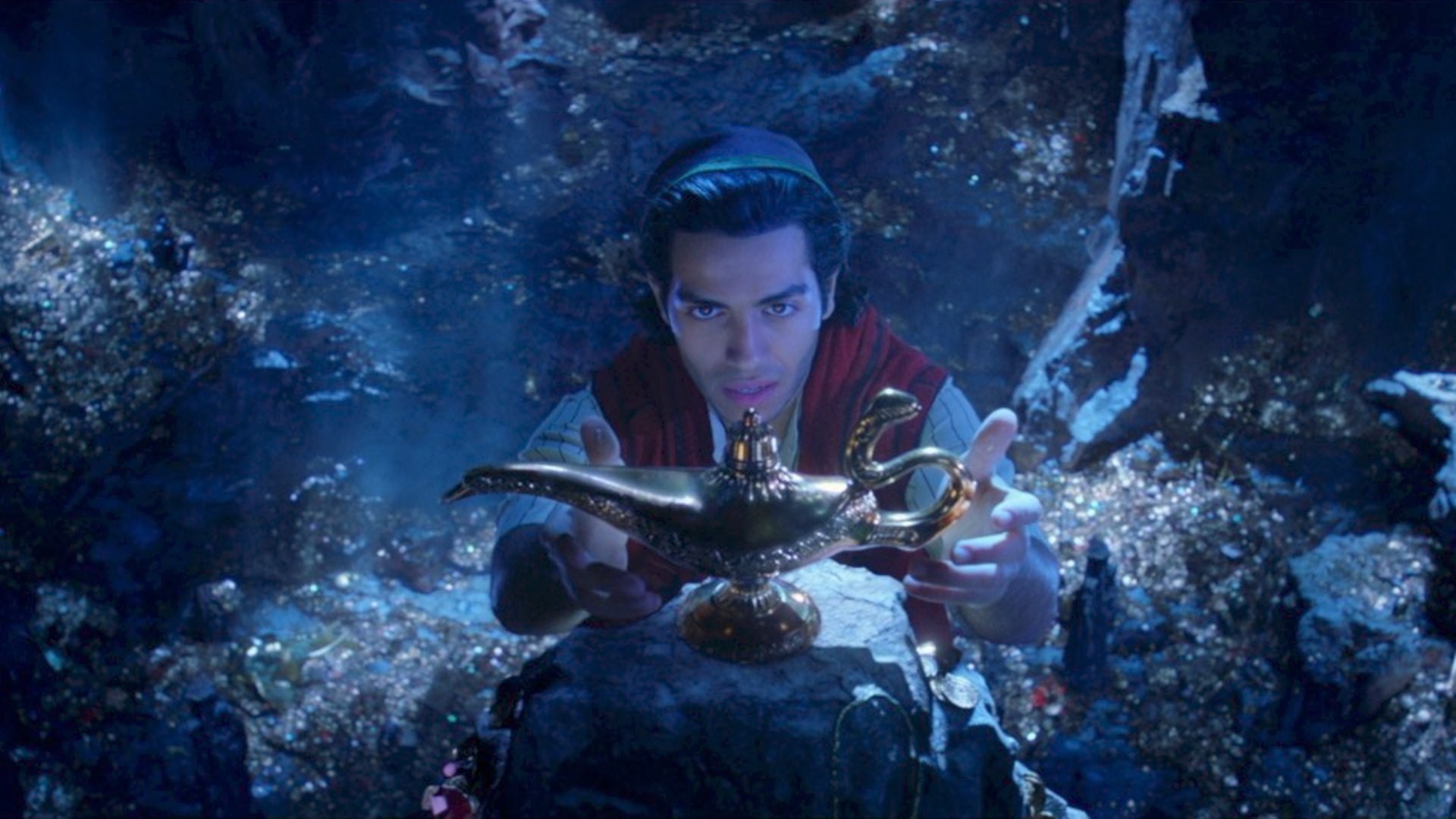 I just realized, looking through the cast of Aladdin and their respective filmographies, what the biggest barrier was between my desire to enjoy the movie and my ability to stomach it.  And that’s not ignoring the many smaller reasons, which I will touch on later; too many Disney live-action remakes, too much blue Will Smith, frantic camera work, and some unnecessary plot lines.  All the small issues add up, sure, but my biggest issue was with the acting, and I just figured out why; these are TV people.  I’m not a TV person, I don’t watch much, though I have obviously somewhat joined the generation of Netflix/whathaveyou bingers who keep up to date on the best shows: OITNB, Downton, Stranger Things, etc.  But I don’t watch network TV, it’s just plain bad, and the actors there are on a certain tier that I don’t like to descend down to.  But they infiltrated Aladdin, this group whose talent doesn’t activate past primetime television, and I can’t forgive this low-ceiling production that one extra misstep.

Aladdin’s just a poor boy, though his story’s seldom told.  Oh wait, no, it’s often told, including within this remake that absolutely no one asked for.  But here we go again, and for our title hero, that means another stroll down poverty lane.  Aladdin steals to earn his daily bread, and one day meets the beautiful Princess Jasmine, who says she’s simply a handmaiden named Dalia.  Aladdin’s about to tell some lies of his own, after he’s caught inside the palace by Jafar, the Sultan’s evil advisor, and forced into a mystical cave to retrieve a magical lamp.  He does the job, uses the lamp himself, and releases a genie who can grant three wishes.  Al’s first wish; to look like a prince, and so the lying begins.  That’s not the ideal way to begin a new relationship, and so Aladdin & Jasmine are off to a rocky start, made worse by the fact that Jafar wants to usurp the sultanate with the genie’s help, something all the good guys in our tale simply can’t let happen. I don’t know how else to say it; these actors are fine, but they’re TV quality, and that’s not what I want when I sit down to watch a movie.  For people who are used to television, maybe they don’t know, maybe it seems fine, and I’m not saying that every actor has to be Daniel Day-Lewis good, but I want something a little more, which is why I don’t watch CSI Bermuda: Special Complains Department.  The quality of the acting was my biggest problem with Aladdin, it just wasn’t up to snuff, not even rivaling other Disney re-dos, like Cinderella or even Dumbo.  I’m glad the cast was diverse, no need for Jake Gyllenhaal to play Aladdin, but I just wanted the acting to be better, simple as that; it wasn’t good enough for me.  And going back to Disney remaking all of their classic hits; friggin’ stop it already, this is getting ridiculous, we don’t need another knockoff of something we care for, only to line your pockets.  You’ve heard the saying, “If you don’t have anything nice to say, don’t say anything at all”; we need to adapt that to force Disney to shut up until they think of something original.

Now on to the other problems, because there are plenty to touch on.  Will Smith’s blue persona wasn’t as awful as it appeared to be in the trailer, but it was still dumb, and I’m glad he spent much of the time as his regular self, that was much preferred.  As Blue Genie, he looked as good as The Rock did when he played The Scorpion King, and that’s not something to be proud of.  Honestly, the animation was pretty terrible, as was the jerky camera work and the sped up movements.  And, oh dear god, the parkour; they might as well have had Michael Scott jumping on desks.  Then that girl from SNL popped up, tried to be funny, failed, messed that up, and Iago was a missed opportunity, as was Raja; I was so disappointed with almost all of Ritchie’s choices, which I guess shouldn’t be surprising.  He was the wrong director for this film, the original was not honored, and Jasmine’s new song was crappy.  I’m finding it harder and harder to remember anything good at all; the middle was OK, with the Prince Ali song, some jokes, and a cool dance routine.  But, other than that, Aladdin is just another weak remake we didn’t need, didn’t ask for, and definitely deserved better than.