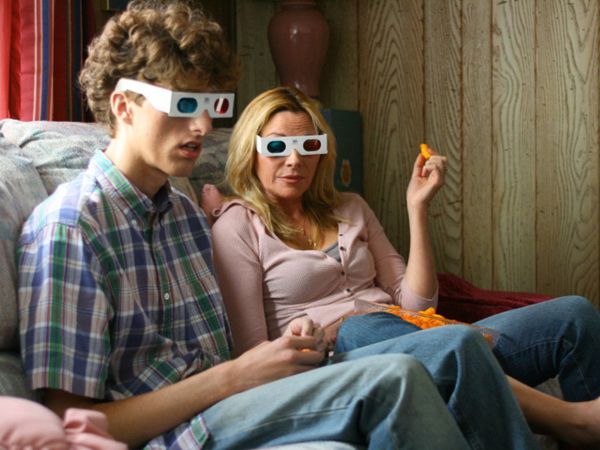 Meet Monica Velour is Keith Bearden’s first & only movie, and you can quickly tell why he stopped trying.  This film is simply Napoleon Dynamite meets Sex and the City, which, I don’t know about you, but that’s a great way to ruin one of the best oddball comedies of all time with some of the most annoying actresses of the last 50 years.  I’m not sure where the idea for this story came from, how it entered Bearden’s head and took up residence there, but I sure wish it hadn’t, because the result is not pretty.  It’s basically an adolescent fantasy turned into “cinema”, and forced to pretend to be deeper than it has any right to be, all while we watch and cringe and wonder what the hell has just happened to our suddenly-worsened lives.

Tobe is graduating high school, working his family’s hot dog food truck, living with his Pop Pop, not getting laid, and still stuck in Retroville when it comes to anything musical, artistic, fashionable; he’s an all-around dork, what else can you say.  His one obsession that outshines the rest is for ex-pornstar Monica Velour, who wowed in the 70s and has since dropped off the face of the Earth.  Tobe is smitten with the idea of Monica, and when he hears that she’ll be performing at a strip club halfway across the country, he sets out on the awkward road trip of the century.  Once he gets there, he soon finds out that his dreams are not going to come true, and that Monica has enough problems of her own without dealing with a love struck teen.

Maybe it’s more Napoleon Dynamite meets The Girl Next Door, with Kim Cattrall thrown in for no apparent reason.  Regardless, the concept is not original, the execution is amateur, and Meet Monica Velour is the last thing you want to watch if what you’re looking for is quality.  It’s dumb, it’s fake-y, it’s recycled, it aims at the heart but misses, and it can never give more than surface level humor.  It’s not sexy, rather sad, not a strong coming of age story, and who the heck is Dustin Ingram?  He does a Napoleon impression and then vanishes, I guess to TV, which mostly shouldn’t count as real acting work.  Cattrall is no good, duh, and their chemistry is weird, as are the plot details and basically every decision made from start to finish.  Avoid.