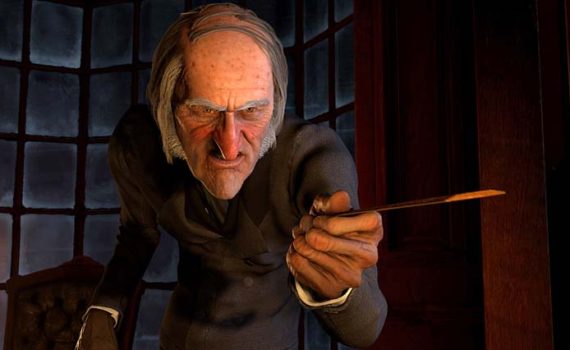 My favorite version of A Christmas Carol is the one with Scrooge McDuck & Mickey Mouse from 1983 (the year I was born, incidentally), but my second favorite has to be the one done by Robert Zemeckis & Jim Carrey.  Both are Disney, but one is our favorite animated characters taking on iconic roles, and the other is motion capture animation done in a dark style that brings new life to an old story.  Zemeckis & Carrey were the perfect pairing, and the film appeals to kids & adults alike, making it not only an instant holiday classic but a movie that can be appreciated all year long.

Ebenezer Scrooge, the stingiest man in London, the cold-hearted money-man who hasn’t a friend in the world. The closest thing he had to a companion was his business partner Jacob Marley, who has recently died. But with Christmas fast approaching Scrooge’s mind isn’t on his loss but on the fools who are jolly for no other reason than the time of year. His employee wants a day off, charity men want donations; bah & humbug says Scrooge. But on Christmas Eve his life changes forever. Scrooge is visited by the ghost of Marley who has a message to deliver; change your ways now or wear the chains of your miserable existence throughout eternity. Marley tells Scrooge that he will be visited by three ghosts, the spirits of Past, Present, and Future. They will show Scrooge the happy life he once knew, the enduring strength of Christmas in the hearts of man, and the grim fate that awaits him if he does not let the joy of the season in to warm his frozen soul.

Not only did Jim Carrey play Scrooge, but he was all three ghosts as well.  Similarly, Gary Oldman was Bob Cratchit, Jacob Marley, and Tiny Tim.  The cast is rounded out by Colin Firth, Cary Elwes, Robin Wright, Bob Hoskins, and Leslie Manville.  And these aren’t just voices, this is motion capture; the actors were filmed and then turned into digital images, it’s a cool process, and really aided in making this film seem realistic and fanciful at the same time.  It’s a solid retelling of the story we’ve heard a hundred times, with a bit of a grim edge that younger audiences might even find frightening.  But that makes sense, there’s a lot of death and poverty to the original book, this version doesn’t sugarcoat that, and so the moral shines out all the clearer.  Creepy music, nice effects, an easy-to-follow plot; we’ve seen it before but very rarely better.