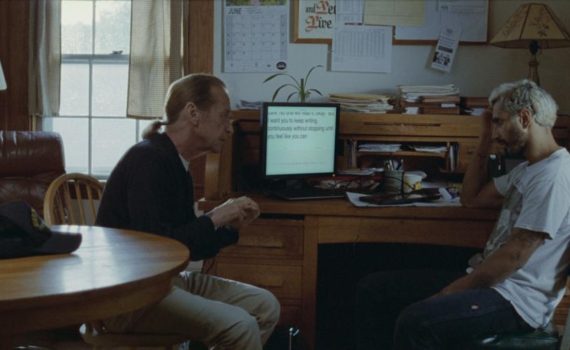 The Age of Ahmed is upon us; all hail Rey Riz.  The British actor burst onto the scene around 2016, and has since refused to slow down: Jason Bourne, The Night Of, Una, The OA, Rogue One, Girls, The Sisters Brothers, Venom.  He’s a naturally gifted actor, an instantly likeable spirit, and a star in the making, simply needing the roles to showcase the talent.  Well, enter Sound of Metal, one of the better films of the year but definitely Riz Ahmed’s best chance to shine, to impress, and to take home awards galore.

Ruben and Lou are a heavy metal vocal/drum duo, and they are also in a relationship, traveling the country in an RV and playing tunes, living the dream.  But when Ruben begins to lose his hearing, he also begins to lose a tenuous hold on his life; he’s a recovering addict, four years sober, but this dramatic change to his body has sent his mind to a very dark place.  Recommended to a group home that not only works with addicts but with the deaf community as well, Ruben will need to accept his hearing loss so that he can control his life.

Riz Ahmed is special, and that’s never been more obvious than in Sound of Metal, a film that allows him to shine simply by eliminating the typical movie mess that surrounds too many actors too often.  The story helps, there are many quiet moments, we are invited to enter a world most of us can’t understand, and by being there we begin to see what’s truly happening.  Ruben struggles, but his fight isn’t over-dramatic, it’s real, and Riz plays that perfectly.  It’s a simply plot, it dodges the typical rehab bullshit, and focuses instead on the person, the change, the acceptance, the addiction, and all the steps it takes to come out the other side intact.  This film will be remembered as one of the strongest of the year, but Ahmed will be rewarded for it.