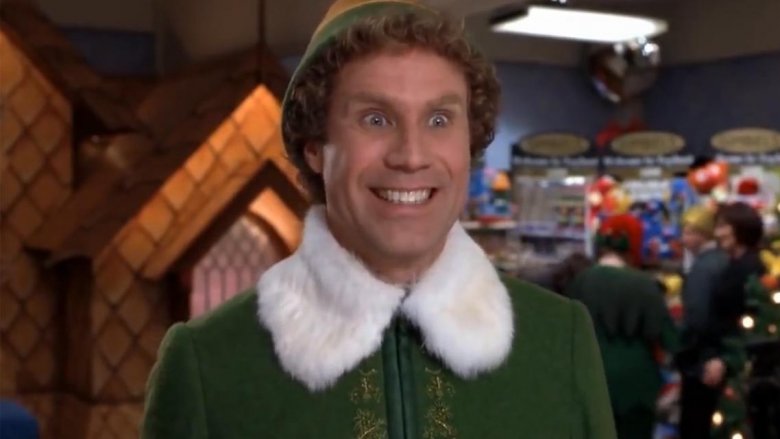 Will Ferrell’s utter ridiculousness is well known, and rarely has it been on display so entertainingly than in Elf, the holiday comedy that become a cult classic.  Sometimes he’s crude, sometimes he’s juvenile, sometimes he can even play dramatic, but no character has ever been written so perfectly for Ferrell than Buddy the Elf, because it gives him the opportunity to be a giant man child in funny clothes who is too extremely ludicrous to be believed, and that’s about the dream role for a guy like Will.  He’s a goofball, he’s a kid, he’s ultimately trying to give us some simple laughs, and that all works here, in a movie you won’t soon forget.

Buddy is a human, but he was accidentally adopted by Santa’s elves, so he’s grown up believing that he belongs in the North Pole, even if he seems a bit too tall for the job.  When he finds out that he’s from New York City originally, and that his real dad still lives there, Buddy heads to the Big Apple to find a family.  What he finds instead is a world that doesn’t believe in Santa Claus, and that just doesn’t make sense.  Buddy is so full of holiday spirit that it just bursts right out of him and infects all those around, which is ultimately how he’ll connect with his father, with the lovely Jovie, and bring cheer to the entire wintry world.

Elf is so much fun, a real good time, and that’s pretty rare.  Will Ferrell can do raunchy, but here he tones it down for families, and delivers a feel-good holiday classic that somehow has a real moral, while also being a bumbly barrel of laughs.  Honestly, it’s just hilarious to see all 6 foot whatever of Ferrell romping around in an elf costume telling everyone he knows Santa; it’s not much more complicated than that.  But there are some good extra pieces, namely the cast, which somehow works, though it seems random: Ferrell, Caan, Deschanel, Bob Newhart, Ed Asner, Mary Steenburgen, Peter Dinklage, Andy Richter, Kyle Gass, Artie Lange, Jon Favreau.  It’s full of laughs, quotes, memorable moments, and Christmas spirit, which makes Elf a holiday favorite in my house.