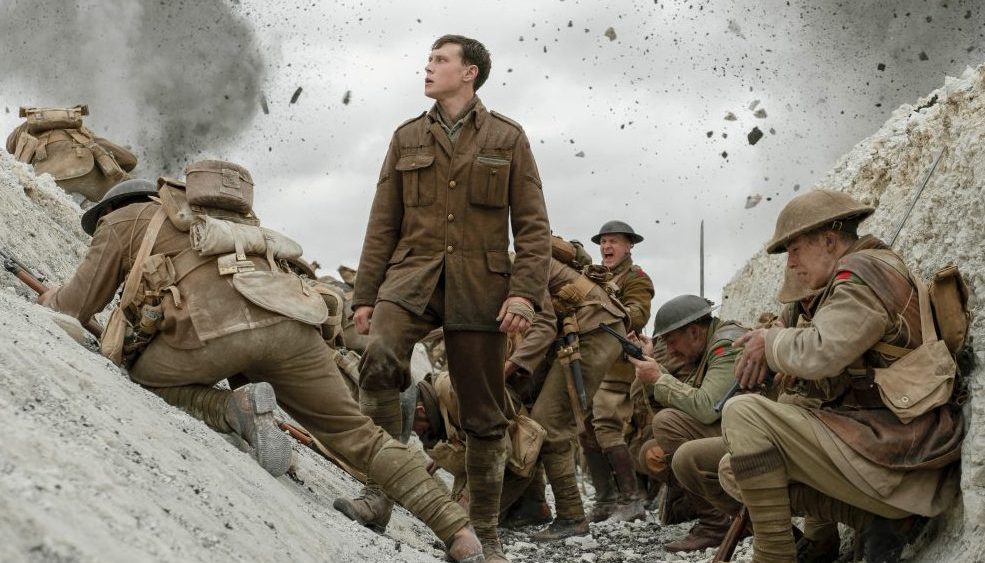 1917 is n0t a true one-shot film, nor even a two-shot film, but the details don’t wholly matter; it feels like a single breath to audiences, and that’s what keeps our hearts pounding until the final, incredible finish.  Like Dunkirk before it, this movie is about a ticking-clock feeling, or a first-hand encounter, not about the dramatics of typical Hollywood, and how that industry usually creates a WWI or WWII flick.  This is something else entirely, and we should be thankful for that limited experience, thankful to Sam Mendes for crafting something that seems so lifelike that we can hardly stand it.  1917 will be nominated for Best Picture this year, which is definitely deserved; I think its legend will only grow larger the more perspective we gain with the passing of time and the study of what went so well so constantly.

April, 1917, with British forces feet away from German, in a muddy, bloody standoff that would perfectly encapsulate the horrors of trench warfare.  But news has reached the line; the German forces have withdrawn, seemingly giving the British a chance to strike.  A battalion gives chase, but are being drawn into a trap, with their enemy forming new defenses that will be impenetrable.  Young corporals Blake and Schofield are given an almost impossible task; cross the no-mans-land, cut through dangerous territory, reach the battalion, and warn them that the attack on the new German line must be called off.  The lives of sixteen hundred men are in the hands of these two lads, as they make their way through hell to save their brethren.

It will seem as if this film was created with only two running shots, and although that’s not true, it’s still pretty awesome.  We march alongside these boys and we experience everything they go through, the quick cuts between scenes hidden within the movie; when a camera pans over a rock and the actors walk behind it, when they walk in one side of a building and out the other.  But you hardly notice those moments, the film feels like a continual stream of action and danger, which is so impressive.  Mendes knew what he wanted to do, created the impossible, and kept heart within his story, something that Dunkirk is accused of failing to do.  But 1917 never falters, is always high-motor, while never succumbing to typical genre cliches.  It’s fresh, brutal, personal, sad, and perfectly encapsulates a war we don’t tend to spend much thought on, but really should try to understand better.  The acting is great, with cameos from Colin Firth, Andrew Scott, Mark Strong, Benedict Cumberbatch, and Richard Madden, none of which ever felt forced.  The emotion is so great, the tension palpable, and the cinematography perfect; Best Picture material for sure, and I think a movie we will look back on with even more respect.