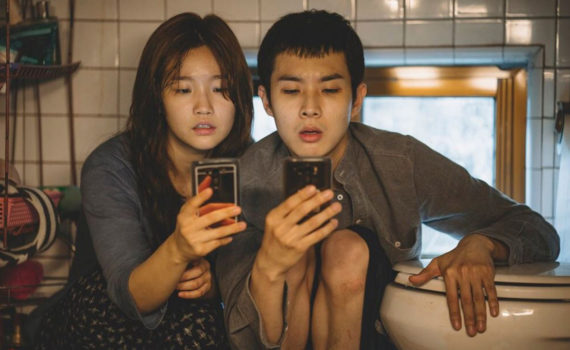 In the conversation for Best Film of 2019, Parasite packs a bonkers wallop, much like 2017’s Killing of a Sacred Deer, which, I will admit before we go any further, I liked better.  Yorgos Lanthimos and Bong Joon Ho are both legitimate visionaries, they both bring something fresh to American audiences that we are never quite prepared for, and so hats off to those amazing directors, keep up the good work.  But I do prefer Lanthimos’ style a bit more, and I only bring him up because this latest BJH film really does have an air about it that I seem to have breathed before, a sense of dread that I’ve appreciated in the past, and honestly don’t mind appreciating again.  Parasite might not be my choice for Best Picture, but there is no doubt it deserves Top 10 recognition, if just for being so daring that we can’t not talk about it.

The Kim family is jobless, pathless, desperate, but clever, so you can guarantee that they won’t stay down for long.  They each are skilled and smart, but it’s hard to find work, it’s hard to jump the track that you’re on, and sometimes opportunities only come to those who are wicked enough to snatch them.  Fate knocks when the son is offered a part-time job as a tutor for a very wealthy family, and he soon sees an opening for his sister as an art instructor.  They then recommend their dad as a chauffeur, and their mother as a housekeeper, but all while pretending they don’t know each other, attempting to milk the rich Park family for all they’re worth while the ruse succeeds.  But a sinister secret will blow it all up in their faces, and their lies will escape the darkness, forcing the false family to face what they have done.

‘Bonkers’ is the word, even if it takes a while to get there; trust me, it’s coming.  Much like the films of 2017, which feasted on the abnormal (Mother!, The Square, Killing of a Scared Deer, Get Out, Split, A Cure for Wellness), Parasite isn’t afraid to immerse itself in the obscure, especially after setting things up so carefully early on, only to pull the rug out from under our feet eventually.  The twists will surprise, but they aren’t even the meat of the movie; it has a strong foundation in story and in delivery, it is definitely built from the ground up.  The lies are great, the plot is funny, there are some red herrings throughout, you really get to know both of these families, you get so uncomfortable at times, and then shit really hits the fan; it’s rather brilliant.  BJH (The Host, Snowpiercer, Okja) knows his stuff, he crafts something masterful, and his latest project won’t just be one of the best foreign films you see this year, it’ll emerge as a leader among all this year’s dramas, as long as you are ready for unorthodox entertainment.  This type of wacky, weird, wonky violence isn’t for everyone, I’ll warn you, but it’s definitely tailor-made for some of us; deciding which camp you belong in is your job.