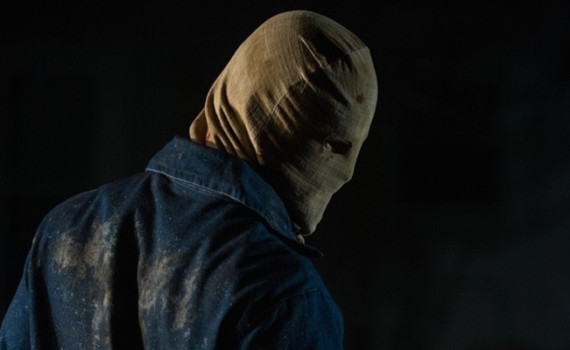 Full disclosure; I’ve never seen the original.  In case neither have you, it’s a 1976 film of the same name “loosely based on a true story.”  Basically, it’s a slasher film with a hooded killer known as the Phantom who wreaks havoc in Texarkana.  But it has a cult following, if not as large as The Texas Chain Saw Massacre, and has warranted a sequel/remake.  Perhaps I would have let it pass on by, not appreciating the origin and assuming that it was just another horror reboot, if it weren’t for Alfonso Gomez-Rejon.  He directed the critically successful Me and Earl and the Dying Girl, his only other feature film, so with that movie on my radar his name caught my attention.  And I’m ready to say that this guy has talent.  Not only did her help craft a solid indie film that should lead to more major work, but he also took a slasher film, modernized it, made it watchable, and impressed me with a skill set you don’t find in this genre often enough. In 1946 in Texarkana, a mad killer began a reign of terror that would forever change the town.  He was known as the Phantom, and his deadly deeds would become the stuff of legend, especially to the folks who had lived there all their lives and whose children would follow the same path.  In 1976, a movie would be made about the murders, dredging up the pain that was caused so many years ago.  And now, over 60 years after the killings, that movie is still being shown on Halloween night at the town’s drive-in theatre, becoming a dirty tradition that some hate, some love, but all are a part of.  But the past has a way of repeating itself, even when it hasn’t been forgotten, and the Phantom is back for more blood.

A young girl named Jami, who is out on an innocent date with a boy named Corey, is the first witness to the gruesome work of the Moonlight Murderer.  Corey is killed, but Jami is spared, set free with a whispered warning that this is happening so that the town will never forget, so that they will pay for the mistakes they made all those years ago.  And while Jami attempts to unravel the secrets of the masked man, he continues to kill, brutally torturing the youth of the area and taking lives when & wherever he wants.  The local police are no match for the Phantom, neither is a Texas Ranger, and only Jami seems to understand the depth to which the insanity goes.  Will she die like all the others when the killer comes for her, or will she find a way to survive? One major thing that I enjoyed about The Town That Dreaded Sundown was attempting to place all the faces gracing the screen.  It became a game of “who’s that actor and where have I seen them.”  Addison Timlin I recognized from Odd Thomas, Travis Tope from Little Accidents and Men Women & Children.  We’ve all seen Anthony Anderson in a dozen terrible movies, although he was actually pretty great in a small role here.  And the side actors were all recognizable characters, if not names: Veronica Cartwright the mom from Flight of the Navigator, Gary Cole the boss from Office Space, Edward Herrmann the dad from Richie Rich, Spencer Treat Clark the kid from Gladiator, Ed Lauter the gruff guy from everything.  It was fun just to piece together the filmography of everyone involved, and although it broke down the fourth wall a bit, it added to the enjoyment of the movie instead of detracting from it.

But the actors aside, and remembering that I don’t have the first as a frame of reference, this was one of the most original horror movies I have ever seen.  I know that it being a sequel/remake should preclude it from being called ‘original’, but I’m speaking more on the style & vision than on the content.  Plot-wise, it’s not too different than so many others, including the first; masked killer, young people, some sex, a ton of blood, creative deaths, incompetent law.  But the way in which the film was shot & directed surprised and pleased me enough to make me forgive the story its flaws and contrivances.  Director Gomez-Rejon has a great eye for detail, a way to make every scene stand out, and a talent for crafting moments to both terrify & impress.  I found myself time & again remarking on how great a shot just looked, how visually interesting the last five minutes just were, and wondering what would happen next.  Not in the story, that was unspectacular, but in the filming, that’s what shone.  This movie has low ratings both from critics and from audiences, but I can’t agree with them.  What I saw was a slasher film with an artistic flare, a movie that was attempting to be more than just another reboot.  Acting, dialogue, copying from the original; if you want to find fault there I won’t argue with you.  But I was pleasantly surprised that someone seemed to have taken the time to make The Town That Dreaded Sunset a drama, visually at least, and didn’t give in to the typical, shaky, crappy style that is dominating this genre.

Video – With an aspect ratio of 2.40:1 Widescreen, the video is as good as you’re going to get from a non-HD slasher film.  The movie was shot using a Sony F-55 camera and boasts good quality, if not great.  The picture is fine, with a great eye for the dramatic, but without any eye-popping color/crispness to impress audiences.  It’s a dark film, as are many horror classics, so the video doesn’t stand out in that way, but it also doesn’t detract.

Audio – The DVD was done in Dolby Digital 5.1, with an option for English or Spanish language.  Also, closed captioning is available for the hearing impaired.  The sound quality of the film is almost too good.  Extra emphasis was put on the sounds of the killings, the death rattles of the victims, and could be distressing to those who aren’t used to the genre.  A little timely music, realistic effects, and an overall nice audio delivery. Recommended.  Basically, I liked this movie more than most others did.  And that’s surprising, given that I’m no horror expert and don’t know all the classics that came before and set the stage for this one.  But, very simply, I liked the way this film looked.  It took the normal setup, spared no gore, and was shot extremely well.  The other mediocre details of the film aside, I enjoyed the way the movie looked scene after scene and was impressed by the direction behind a project that could have been so much worse, given the typical plot & only passable acting.  The video quality itself was only OK, the audio the same, and there are almost no extras on the DVD.  But I saw something here, or actually many things, that surprised me with their originality, and I won’t be grouping this with other slasher remakes; I see it as a step above.