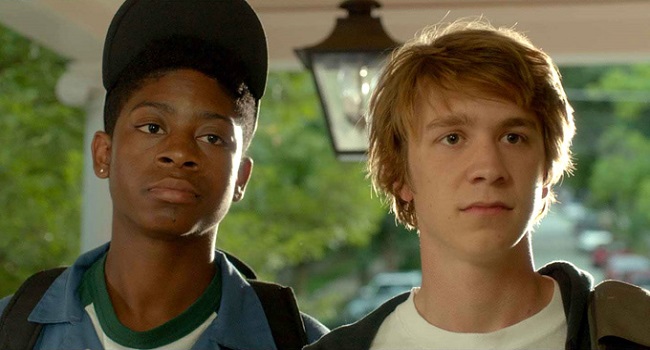 I recently watched The Town That Dreaded Sundown, a clever horror remake that was actually quite good, even beyond its ability to gross & freak out.  It was crafted with an eye for detail and artistry, something that most movies in the genre completely ignore.  It somehow gave us a classic feel with modern visuals, scaring of course, but impressing to.  I bring it up because it happens to be the first film directed by Alfonso Gomez-Rejon.  His second; Me and Earl and the Dying Girl.  It was complete chance that I watched these two movies in succession, noticing surprisingly intricate cinematography in the first and surprisingly deep themes in the second.  Gomez-Rejon is, apparently, a director who likes to layer visual upon visual, theme upon theme, creating a story that is simple but a texture that is anything but.  Keep an eye out for Collateral Beauty, his next project, which stars Rooney Mara & Jason Segel; something tells me that this director will only get better & better.

The ‘Me’ in this story is a high school senior named Greg.  Earl is his best friend, though Greg only refers to him as his co-worker.  The dying girl is Rachel, an unassuming classmate who has leukemia.  So, there you go, Greg & Earl & Rachel, and that’s basically what this film is about.  It’s plot that only follows one path; Greg befriending Rachel after his mother forces him to, Earl along for the ride since he spends most of his time with Greg filming terrible movies and eating odd food.  The trio will spend half of their senior year hanging out together as Rachel gets sicker & sicker, but it’s not the action that makes the film, it’s the motivation behind it.  Greg has always hated himself, disliked other people, and preferred to joke his way through life instead of getting close to anyone.  But when someone is dying right beside you, you’re kinda forced to deal with a few emotions, even ones that startle you, confuse you, and just might change your life. Here’s a trailer for the film if you haven’t seen one yet, or haven’t heard the press.  It’s been mostly positive so far, the movie impressing both audiences and critics with its easy story flow but complicated emotional subtext.  And I’m right behind all those singing its praises; Me and Earl is one of the better films I’ve seen all year.  First, it has a coming-of-age draw that we all fall for and all enjoy.  Growing up is hard, as dumb as that allows sounds, but it’s a truth we can all accept, and we actually like to see that struggle on screen, knowing that someone else went through tough yet hopeful times and perhaps survived with a little bit of grace & residual knowledge.  This film understands the genre, the drama behind this time in our lives, and delivers a plot that we can all relate to.  Add in the extra complications of Rachel’s illness and what you’ve got is an adventure in which youth faces incredible odds, with audiences pulling for it all the way.

So now that we’re on board and rooting for Greg, Earl, and Rachel (and really, ourselves, right?), all that’s needed is a director to touch the film gently and nudge it towards the intended goal of breaking our hearts.  Gomez-Rejon was the man for the job, and he seems to know just when to throw in a visual trick, just when to lay back and let the characters speak, just when to spark our laughter before we cry.  He guided the film along from a typical start to a typical finish, but with a depth in the middle that transcended the plot.  The details in the dialogue, the humor in the absurdity of the situation, the originality of the style; the story quickly faded into the background and the complexity of the film became what tied us up and made us feel, regardless of how painful our emotions were becoming.  Mann, Cyler, & Cooke meshed as a team, brought quirk where others would have brought young adult fiction, and succeeded in making Me & Earl something much more indie & powerful than the popular modern movies that teens currently live to die for.