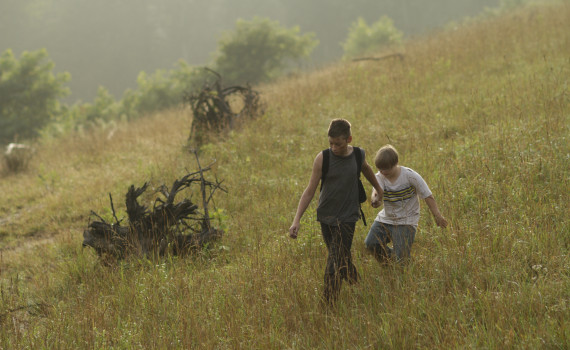 The first time I saw Jacob Lofland in a film his character’s name was Neckbone.  Actually, Mud was the first film anyone saw Lofland in, as it was his first film, done at the age of sixteen.  He looks much younger in the movie, playing a small part, the best friend of the main character.  Tye Sheridan was the lead, alongside Matthew McConaughey, and Mud turned out to be a phenomenal movie, one that I didn’t see coming and one that you’ll love too if you enjoy a deliberate pace, high drama, a country feel, and incredible character acting.  Anyway, Tye Sheridan, who was also in Joe, seems to be a rising talent that we’ll be seeing for years to come.  And perhaps Lofland is the same, as his second film confirms the fact that this kid can act, that he’s more than just his accent, and that perhaps a new wave of young stars who don’t rely on teenage dystopia as a route to fame is on its way.

In Little Accidents, the town is perhaps the most important character, creating a perfect background for the action as it unfolds towards a dramatic climax.  We see a small mining village in the hills, a place where everyone knows everyone, a place where all men work underground except for the lucky few to have a college degree.  They still work at the mine as well, but there’s great distance between workers & bosses, blue color family men & the rich minds that decide their fate.  In this town, you either dig coal, manage coal, are married to coal, or will grow up to be one of three, there are no other options.  And so when a tragic accident kills a group of diggers and threatens the stability of the company itself, every person, rich or poor, is affected and changed.

Amos is the lone survivor of the cave in, a simple man who doesn’t always feel lucky to be alive.  He’s got to decide what to do next; tell the truth about the poor conditions of the mine & threaten the livelihoods of every man who works hard for a living, or lie and pretend that it was all just a random incident, effectively telling the families of the men who died that their lives meant nothing.  Owen, whose father went down #3 and never home, must live with the fact that now he’s responsible for his mother, his handicapped brother, and the decisions he makes, whether or not he refers to them as accidents.  And Diane, the wife of a mine boss, can feel the town’s hate for her husband, but can understand their grief when her own son comes up mysteriously missing.  These lives, along with every soul in the town, intersect in a way that’s not only unhealthy, but can’t possibly lead to anything but despair.

For a movie that very few saw, it’s shockingly good.  Especially when you factor in that this is Sara Colangelo’s feature-length directorial debut, after having made a few shorts over the past few years.  It’s a movie that no one saw coming, no was saw period, but deserves so much more.  First, the town is perfectly depicted.  The woods, the trailers, the mines, the church groups, the diner, the train tracks, the high school kids; this is a very personal movie and feels so real, like I could walk into this town and meet these people, understand their problems and sense their pain.  They always say “write what you know”, and although I have no knowledge of Colangelo’s background, either she lived in a place like this or she has the greatest imagination any filmmaker has ever had, because this film feels like a true story dripping with drama.  And it has such a darkness about it, such a fog of dread & bad choices, with music to support the mood and a good directorial eye to catch all the tiny details that make the film work so well.

Sounds depressing perhaps, and I can’t say that it’s ever warm & fuzzy, but the actors keep the plot level when it could have become something too heavy to hold on to.  Boyd Holbrook, who I’ve seen five times in small roles over the last couple years, blew me away as Amos, playing the part to perfection.  It’s hard to define what he did right, I might just have to say ‘everything’, because his performance was one that I will keep in mind come awards season.  You have to see it to believe it, and I highly doubt anyone will be chanting his name come February, but let me be the first to say it; this is an Oscar-worthy role.  Jacob Lofland wasn’t far behind, with an incredibly complex character for such a young guy, showing again that this is a kid worth watching.  And even Elizabeth Banks brought her A-game, delivering perhaps the strongest product I have ever seen from her.  Combined, and with a touch of help from Josh Lucas & Chloe Sevigny, this is a stellar cast in a surprisingly good movie, not one that will rise to top of a lot of lists, but a film that’s worth much more exposure than it received, something a fan of hard drama shouldn’t miss.

Video –  With an aspect ratio of 2.35:1 Anamorphic Widescreen, the video is top notch.  The film was shot using an Arricam LT camera with Cooke S4 Lenses, and the high clarity can be seen in every shot.  The picture quality was very strong, with a good eye for detail, a nice use of color, a great balance, and a multitude of shots around the town that show what life in a mining community is all about.

Audio – The disc was done in Dolby Digital 5.1, with an option for English SDH or Spanish subitles.  There are no other language or audio options available.  The sound quality was very nice, with a use of music that was pretty brilliant.  There was a repetition and a weight to the steady soundtrack that really matched the mood the film and added an extra element to the story.

Extras – There are no special features on this DVD. Recommended.  While not for every audience, Little Accidents is an honest & emotional drama that flew under the radar, when its high quality deserved so much more.  It’s well-acted in every scene, realistic in its character development, set in a place that feels like a town down the street, and always level in a way that so many directors find it hard to control.  Is it the best movie of the year; no.  But will it surprise you with its ferocity; yes.  And Boyd Holbrook will impress you with his performance, something you don’t see every day, and something I didn’t know he was capable of.  Keep his & Lofland’s names in mind; you should be seeing much more from them.  The video was excellent, the audio good as well, but the disc has no extras.  A drama in every way, a dark story that won’t be for everyone, but a film that got my attention.