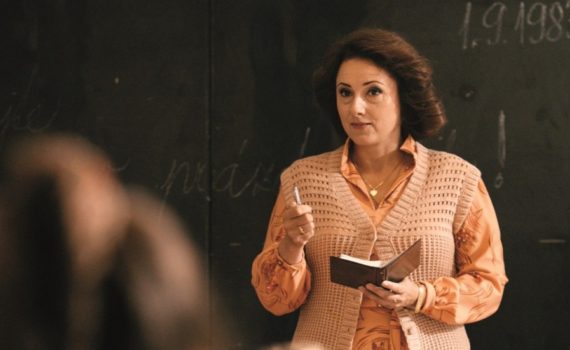 My brother-in-law is Czech, and grew up in Communist-era Prague during the 70s and 80s.  I texted him while watching this fascinating film to get translations of street signs and propaganda, although the setting here is Bratislava, Slovakia, not the Czech Republic; close enough.  He is always on the lookout for Czech or Slovak films, and this one really piqued his interest, as it focuses on a very specific time frame, one which he experienced first hand.  But at the same time, this story is an example of the Communist ideal (and abuse thereof) worldwide, a snapshot of what it’s like to live under the thumb of a regime that proposes to make every comrade equal, an existence that comes at a very steep price. The year is 1983, and Czechoslovakia is under Communist rule.  The families of suburban Bratislava accept this as the way of life, even if this Russian-backed regime isn’t what they would have chosen for themselves.  They get along as best they can, sliding into the complicated puzzle that is this government while trying not to stand out or make too much of a ripple.  The Kuceras work hard, the Binders rely on past physical prowess, and the Littmanns try to live down the defection of their matriarch, a brilliant scientist who fled to Sweden instead of bowing to the new power.  Far from a worker’s utopia, life for the middle class is a constant balancing act between finding satisfaction in one’s self and integrating into something much larger and more dangerous.

When a new school teacher comes to town, this high wire act will get all the more treacherous.  Mrs. Drazdechova’s first day in the class room see’s her gleaning information from her students; who are your parents and what do they do.  Each time she needs a favor (a car ride, a lamp fixed, a cake baked, groceries picked up, her house cleaned), she uses a student, their mother, or their father, expecting immediate aid and no questions asked.  If they are impertinent enough to balk at the task, the student’s grades mysteriously suffer, to the point where they lose all after school privileges.  Some parents want to stand up to this new tyrant, but others are afraid of the repercussions, knowing that their lives could very easily and very quickly get much worse. On the surface, this is a very simple story told very swiftly to make a singular point.  The teacher is an Umbridge-ian villain, she uses her power irresponsibly, she is corrupted by her position, and it is up to the students and their parents to stop her.  The sequence of events is scattered throughout the timeline, with two paths converging at different points to make the watching of the story more interesting, but really the plot is very simple; let’s get the crazy lady out of town.  The acting prowess behind the characters is understated but very strong, especially when it comes to Maurery, who you will absolutely hate.  Martin Havelka reminded me of a modern Charles Bronson, whose parents were Lithuanian, but still.  Each actor, and not forgetting the kids, played his/her part wonderfully, which led to an extremely believable atmosphere.

And that’s just the surface, there is much more going on here past the obvious plot.  First, this is a metaphor for Communism in general, or for any social setting in with someone with control abuses it for perhaps no other reason than that they can.  This kind of dystopia existed and exists; not just in one place, not just in Russia, and not only with Communism, but anywhere where there are individuals who preach equality, only to use their own status to make themselves anything but.  It’s a fascinating look at corruption, and the film also peers in on human interaction as well, in a very 12 Angry Men kind of way.  Setting the parents in a room together, we see how each acts in the face of uncertainty; afraid, angry, denying, resigning, bravely standing when no one else will.  It’s an example of the human experience, the human experiment perhaps, and as well-captured a poignant message as we could wish to see. Video – With an aspect ratio of 1.78:1 Widescreen, the video quality of this DVD is nothing to write home about, a foreign flick that captures the 80s but never tries to impress with visuals.  I did love the apartments, the dedication to detail, the tight spaces inhabited by these characters and their families.  It was fun to watch, to be transported, just don’t expect HD cinema.

Audio – The disc was done in 5.1 Surround Sound and 2.0 Stereo, both in Slovak with English subtitles.  That’s it as far as language or audio options, the sound not a factor that was ever a focus.  There is a catchy soundtrack throughout that sets the tone, but other than that you won’t remember much more from the audio.

Extras – There are only a few special features on the DVD.  Sacrilege is a bonus short film, running 15 minutes and telling the story of Saoud, a once-proud king of the ‘hood.  There are six trailers available to view.  And About Film Movement will tell you more about the distributor.

Highly Recommended.  A little more than an hour and a half long, The Teacher makes its point rather easily, without having to hammer anything into our brains.  It’s a frustrating story about a manipulative woman, but it’s also a commentary on the power that she represents, the greed and the evil that is far too often behind these historic movements.  You can enjoy this movie for its surface or for its depth, and that’s not something that can be said about every feature released.  The video is only OK, the audio forgettable as well, and there aren’t many special features, so look elsewhere for technical marvels, but appreciative this story for what it has to say, and this movie for how well it says it.