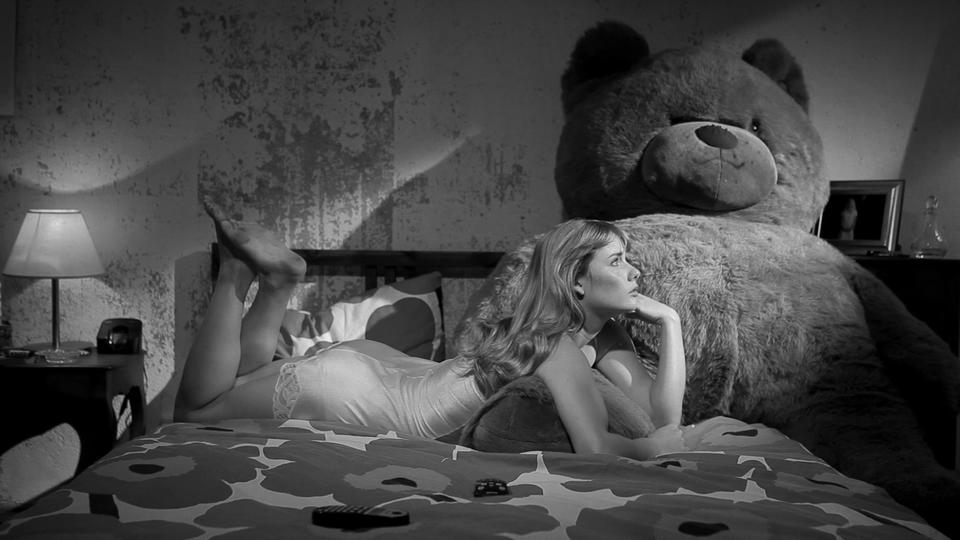 True Love Ways (which is a title that doesn’t really make any sense in English, I wonder what its native translation actually means) is a film that seems to have picked far too many specific niches to possibly be a movie that more than a very small number of audience members could really enjoy. German, noir, horror, black&white, bloody, trippy, sexual, snuff; there is almost too much to see, more than anyone can focus on without getting dizzy, despite the slow pace and the relatively simple story.  If the director had only chosen a narrower lane, he might have made his movie more accessible for a larger group.  As is, True Love Ways is a blur of ideas and a hard pill to swallow. Severine no longer wants to be with her boyfriend Tom, an unsettling feeling of discomfort creeping over her life and affecting her happiness with him.  It’s both physical and mental, this change, and all she wants is space.  She has been having a recurring dream about a stranger in a white car, someone coming to take her away from her trouble.  Tom doesn’t take the news well, impulsively confiding in a dark man in a bar, telling him about the sadness into which Severine is about to plunge him.  This man convinces Tom that he has a crafty solution to the problem and that, much like El Gallo, his theatrical abuse of the damsel will set a hero up to rise, Tom winning Severine back to him by “saving her” from harm.

But what Tom doesn’t know is that this sinister man has an evil plan.  He bugs Severine’s apartment, discovers her routine, and sets a trap that will deliver her into his and his partner’s hands.  What they will do with her then is beyond imagining, but they will not be returning her when they are finished.  Now Tom will have to become an actual knight in shining armor, but not before Severine must step up to save herself, taking violence away from the men who want to hurt her and turning it directly back on their unsuspecting souls.  She will have to reach deep down into some primal place in order to survive, and she will have to be willing to spill blood if she hopes to see tomorrow.

There are too many movies here to critique at once, too many ideas and styles splintering off the original, until the point is lost somewhere in the muddle.  It’s almost a throwback to an old, Teutonic, melodramatic, black&white, deeply-hidden genre flick that only a few know about and which they all consider a cult classic.  The odd camera work, the dangerous sensuality, the lack of standard plot elements, the absence of meaningful dialogue; it’s definitely intentional, definitely purposeful, but the result is almost too stylistic, too out there to be appreciated by, well, normal people.

Sometimes Seiler slips in a little magic; the giant stuffed bear, the tape-recorded vibrator, the killing in the woods, hiding behind the shelf in the catacombs.  There are moments that catch you off guard and will delight those looking for an off-beat version of the standard thriller storyline, surprising us when we didn’t think we were capable of being surprised any more, when we thought we had seen it all.  But these quick flashes of originality are buried beneath a bizarre plot and some nonsensical characters, until you get tired of sifting through the junk for the precious trinkets underneath.  Built upon too wide a range of concepts and influences, True Love Ways ends as a derailed train, and I’m not really sure where we were headed in the first place. Video – With an aspect ratio of 1.78:1 and shot in black&white, the video quality of the film is poor if we’re being critical, fine if we’re not.  The clarity of picture will not impress you, and there is obviously no color to speak of, so the visuals slide away under the story until they are completely forgotten.

Audio – The DVD was done in German 2.1 Stereo.  That’s it; no audio options, no language choices, nothing.  The music that forms the backing track is creepy and classic, but not of any significant quality.

Extras – There are no special features, no menus of any kind, on the disc. Rent It.  Though not a terrible experience, watching this film is definitely a forgettable one.  There are elements that feel like homages to the cinema of the past, and that can be appreciated, but there isn’t enough in the way of new material to warrant much audience enjoyment.  The video isn’t great, neither is the audio, and there are no bonus features, so forget about any supporting technical aspects.  And the film needed some support, from somewhere, to carry it when its classic roots could hold it up no longer.  It lacked special qualities to keep it viable once you understood the nods and were ready for some new content, failing to becoming something independently entertaining, or even worth much of your time.