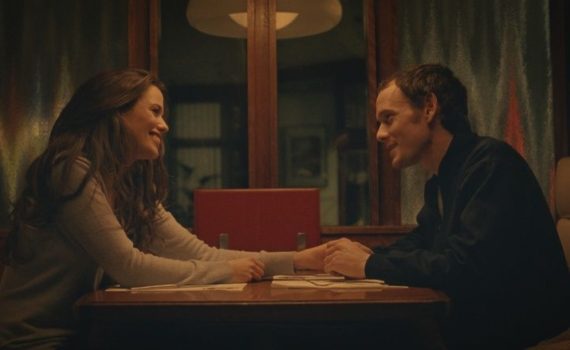 Anton Yelchin’s death was less a tragedy and more a robbery; something was taken from us that we’ll never get back.  I don’t mean to sound possessive over a person, nor do I want to diminish what his family went through personally, but I think for many of us that’s how it felt, like someone had stolen something special that we hadn’t even had a real chance to cherish yet.  Yelchin was a tremendous young actor who was just stepping into his prime; we should have been able to enjoy him for years and years to come.  Now that he’s gone, what we get are his classic roles and his final performances, one of the most adult coming in the indie drama Porto, a romance set in a foreign country that’s not near as good as its lead actor’s legacy.

This is the story of Jake and Mati, a couple brought together by fate and destined to only be together a short time.  Jake is an untethered young man searching for meaning in a mixed up world.  His parents are diplomats, he’s been all over the world, he’s worked every type of job, but he’s never found the one thing that makes him contented.  He sees himself as normal and boring, a regular person doing regular things, not anything special that the universe will take notice of.  Mati is a French woman traveling for a university program, and she’s fallen in love with the freedom that such a life brings her.  She doesn’t want to be tied down by the typical, wants to experience all there is to experience, wants to have lived when she dies.

Jake and Mati meet in Porto, Portugal, and the chance encounter changes their lives.  They see each other first at a dig site where Jake has only worked for two days and Mati is helping with research, they see each other again at the metro, and then once more in a cafe.  It’s fate perhaps, or very unlikely chance, so they introduce themselves and take a walk through the city at night, eventually making their way to Mati’s apartment.  There, they will fall in love, or at least fall into one another in a way they never have before, producing a moment in time that will stick with them both forever.  But when the morning comes, when real life comes crashing back into place, what will it all have meant, and what has it really changed? This is perhaps Anton’s most adult role and one of his very last, so it’s important to remember it so that we can remember him.  He always carried such an earnest likability into every film he appeared, creating characters that were partly what was written and partly just himself.  Tom Hanks does the same thing, every role he plays holds a little bit of the actual guy, and Anton could have been that kind of performer.  It’s awful that he’s gone, awful for anyone who ever knew him, and it’s apparent how much he was loved by the time filmmakers take to say goodbye to him in their films.  I think his friends and coworkers will be making art ‘For Anton’ for years to come, and I also think he deserves it.

Yelchin is the highlight of Porto, but nothing else really shines.  Lucie Lucas plays Mati well, but it’s a very cold character, someone we never really get to know, despite the best efforts of the director.  She remains an enigma, Jack becomes a tortured character, and it’s difficult to like either of them by the end.  The film holds an extremely strong Before Sunrise feeling, it’s obviously being referenced, with a little more sex and angst, a little less happiness and hope.  It’s really a depressing story, told darkly and strangely until it becomes quite difficult to enjoy.  The plot is chopped up and mixed, we get different points of view of the same encounters, the whole idea becomes clunky; there is strong intention here, there is a strong lead, but the resulting feature is rather weak. Video – With aspect ratios of 2.35:1 and 1.37:1 (1920x1080p), and using Aaton Xterà, Arricam LT, Arricam ST, Arriflex 16 SR, Arriflex 416, and Canon AZ 814 cameras, the video of this Blu-ray is definitely interesting, if not exactly mind-blowing.  Different formats and different cameras are used to represent different memories and to set the stage for different scenes, so the film is very visual in its delivery of defining moments, it’s just not a trick that outshines the movie itself.

Audio – The disc was done in DTS HD Master Audio 5.1, with an option of DTS HD Master Audio 2.0.  Audio commentary by director Gabe Klinger can be accessed in this menu.  And subtitles are available in English, English SDH, Spanish, and French.  The dialogue is mostly in English, but also features French and Portuguese, so that’s cool, and there’s a solid soundtrack backing the action.

Extras – There are quite a few extras on the Blu-ray, more than usually come with an indie film like this.  Double Play: James Benning and Richard Linklater is a documentary by Gabe Klinger, a bonus film that runs 70 minutes.  Making a Documentary is a look at this process.  Outtakes give you more insight into Porto.  A Portuguese News Report adds some color.  There is Super 8 Footage for those looking for more.  And lastly, a trailer for the film.

Rent It.  This film is only an hour and fifteen minutes long, so you won’t have to sit through an epic movie to hear the story of this couple, and that short run might be the best idea the filmmakers had.  I don’t mean to say that Porto isn’t worth any time, but I imagine that the longer it ran the less I would enjoy it.  It’s a heavy story, a sad look at fleeting love, and it was done in a unique style that grows very old very fast.  I don’t like seeing the same moment from different characters’ viewpoints; that’s a used trick, and it wasn’t needed here.  If they really were taking inspiration from Before Sunrise, they should have kept it as simple as that film did, allowed the actors to do all the storytelling themselves.  The video was intriguing, the audio was nice, there are lots of extras, so the technical aspects actually held there own, but unfortunately the film itself wasn’t special enough to warrant high praise.