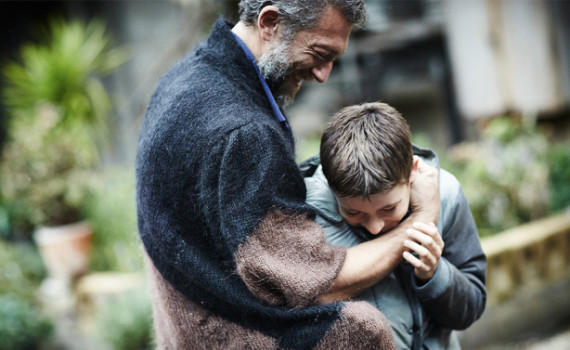 I first saw Vincent Cassel in Sheitan, a 2006 horror film about a shepherd/Satanist.  I didn’t know anything about the French actor, I just happened to be into indie horror films at the time.  I was probably attracted to the name in the title, which means devil and has a Wheel of Time connection, if you’ve ever read that fantasy series.  Anyway, the second time I saw Cassel was in Black Swan, which may have been the first film I ever posted a review of.  He was brilliant in that movie, of course, and since then I’ve always kept my eye on him, appreciated his talent wherever it happened to surface.  It popped up randomly here in a film I had no intention of seeing, but caught my eye as a curiosity, if not exactly a smash hit.  Well, I watched it, watched him, and came away amazed.  Partisan is one of the Top 5 films I’ve seen this year, and will most likely be completely overlooked at this years’ Academy Awards. Much of the greatness of this film lies within its lack of detail, so I’ll intentionally leave as many specifics out of this summary as I can.  Alexander is our hero, a young golden boy who is both smart & kind, an example to his brothers & sisters, the pride of his mother & father.  Gregori, the pater familias of a unique group, loves each of his children, but holds Alexander to an elevated standard, teaching him what it means to be a man, how important protecting your family can be.  And so Alexander grows up under Gregori’s tutelage, until he begins to question his role in Gregori’s plans, the rightness of his father’s actions, and the meaning of his own life as a piece of a puzzle far larger than he has been led to believe exists.

Alexander begins to rebel in a way the exemplifies the struggle we all go through at one time or another, the struggle to follow the path we’ve been shown or blaze our on trail.  To Gregori, any rebelliousness is a sign of a weak mind, a possible flaw in his perfect system.  But what really scares him is the possible lack of control that a free-thinker could create, the possible light he or she could shine on the flaws in Grogori’s own character & practices. So, as Alexander ages, the real battle between father & son begins, an innocent prodding at first that quickly becomes something much more dangerous, much more intentional, and much more life-changing for both the males involved and the entire family as a unit. Partisan is an incredibly balanced mix of The Giver and Dogtooth, a movie that won’t sit well after viewing, a story to haunt you far after you’ve turned away.  It takes a very attractive & fascinating plot element and turns off the lights, prohibiting you from working your way through the problem.  The Giver is a beautiful book because you can grow while reading it, learning more each time you do.  Dogtooth has a dark comedy that’s so sad it becomes funny.  And Partisan is a combination of these themes, taking a complicated existence to a place that’s beyond humorous, allowing audiences to understand just enough to appreciate the extremity of the situation.  I don’t mean to be so vague, but the less you know going in the more open you will be to receive the message.  Just be prepared for dystopia presented on a more personally level than you’re used to seeing. Video – With an aspect ratio of 2.35:1 (16:9 Widescreen), the video quality of the Blu-ray disc is well captured by this format, and presented to audiences in vivid clarity.  While not a story filled with much action, and with the world of the plot a crumbling dystopia, the picture quality still highlights what there is to show, though never becoming the reason you watch this film.

Audio – The Blu-ray disc was done in English 5.1 DTS HD Master Audio, with an option to switch to 2.0 Stereo.  Also, one subtitle choice is available, and that is for English SDH.  The audio quality is good, if muted, and doesn’t stand out, but also doesn’t distract.  The sound of the film is fine, basically, giving audiences nothing to get excited about.

Extras – There are a few special features available on the disc, including a trailer for the film.  Also, two interviews are recorded here, one with director Ariel Kleiman and one with actor Vincent Cassel.  And three other previews can be watched: Black Coal Thin Ice, These Final Hours, Child of God. DVD Talk Collector Series.  I can’t find a critic who feels the same way I do about Partisan, but after all the films I have seen this year, and after much award consideration, I still hold this movie to be one of the very best of 2015.  It has a deep metaphor that you don’t see every day, coupled with amazing acting by all involved.  Yes, it’s heavy and character driven and may not resolve the way Hollywood movies typically do, but I take those as positives, not negatives, especially in a world in which so many films are exactly the same.  Partisan is unique, yes; in its humor, mood, pace, meaning, and story.  But this originality of delivery & fascinating weight of story sucked me in until I was immersed.  The video, audio, and extras were all only OK, but that’s not why you watch this film.  You watch for a dark, laden plot, excellent acting, and because you want to contemplate the film for days.  Doesn’t sound like you?  Well, you’d be in the majority.