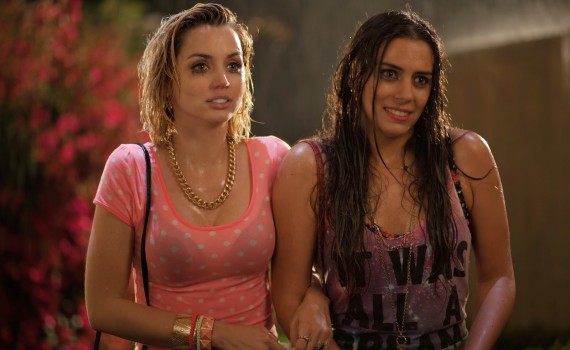 John Wick brought Keanu Reeves back into the spotlight after his post-Matrix adventures had us shoving him into the shadows.  Reeves is an acquired taste, an actor made for certain characters, not someone who can land any role & lay any film across his shoulders.  Neo, Wick, Johnny Utah, even Shane Falco; these men fit Reeves like a glove, but in between cult triumphs Keanu comes crashing down to Earth, and it’s those moments that keep us from giving him our complete respect.  But John Wick success earned him another chance, and that shot came via Eli Roth and the twisted Knock Knock.  Roth backs away from his normal gruesome horror (Cabin Fever, Hostel, The Green Inferno), Reeves takes on the everyman instead of the actionhero, and the result is a film that doesn’t deliver what we’ve come to expect from either man, displaying their weaknesses instead of their strengths. Family man Evan Webber is ready to relax at home while his wife & two kids take a little vacation to the beach.  He’s a successful architect, she’s an artist, and their lives are pretty chaotic.  A big show coming up has stressed Karen out, a shoulder surgery has put Evan behind, and the couple isn’t even having sex right now, let alone getting their work done before their respective deadlines.  So, on Father’s Day after a little cake for breakfast and some hugs from the two best kids in the world, Evan watches his family take a little break from home while he gets a little break from the busy life.  Time to settle in for a long weekend, listen to some rock&roll, smoke a little weed, focus on a new building project, and catch up on everything before life spins too out of control.

Good luck with that, as things are about to get worse, not better.  Evan is on the ball at home, staying up late to finish his work, when the doorbell rings.  Outside are two sexy coeds who are lost without their phones, standing in the rain, just needing a nice guy to help them out, not meaning any harm.  And so Evan invites them in, with good intentions, but never expecting the hell that he has just welcomed into his home.  The girls, Genesis & Bel, are up to no good, and Evan soon finds this out.  He dries their clothes but they seem to enjoy the revealing bathrobes he lend them.  He calls them a cab but they’re giggling in the bathroom.  And when he tries to make them leave, the girls turn into temptresses too irresistible for Evan to deny.  One very bad choice is about to lead to one very bad weekend. It’s a wildly fascinating plot, sketched around seemingly random events, fraught with psychosis & murder, all contained without one normal, beautiful home inhabited by a normal, beautiful family.  The girls are terrors, seductive & sneaky, pushing Evan toward an awful decision, and then watching him squirm with regret.  It’s an odd hostage story with sex as the background, but with a lot of layers to peel away if you care to take the time.  There’s a major moral play going on here, with a wrecked house exemplifying a wrecked marriage, a destroyed life, and with one weak moment dramatically impacting every second after.  Lesson; don’t screw around, or this could happen to you.  And while the events in the film are ridiculously over the top, they stand as examples of how a family can be torn apart and abandoned in the blink of an eye.

So that’s the concept behind the film, but done in an Eli Roth way that won’t be like anything you’ve seen before.  He did channel a little Clockwork Orange here, the young, guiltless bludgeoners of normalcy, but he brought enough of himself forward to make his mark visible.  Problem was, for fans of his, he didn’t go far enough.  This movie is tame compared to his standards, with even the sex & violence holding back from becoming graphic, like an attempt at mainstream from a guy who is anything but.  And then there’s Keanu, who tried his best to be an average dad who found himself in a bizarre situation.  Sorry pal, you can’t cut it, perhaps because you’re not a very good actor, perhaps because your unusual vibe only fits very specific roles.  And so both Roth & Reeves showed their weaknesses here, albeit with a film that had a bit more to say than they are used to telling. Video – With an aspect ratio of 2.40:1, 1080p HD Widescreen (16×9), the video quality of the Blu-ray is top-notch.  The film was shot using a Canon EOS-1D C camera and boasts a great clarity of color & visual.  The house in which the action takes place is a vibrant, artistic backdrop for the filmmakers to set their story against, and it pops in every scene.  There was one problem though, in a scene between Reeves & de Armas, when the video blurred around her skin, as if the color erred and created a blob instead of a clear picture.  I don’t see why it would have been intentional, but I also don’t see how it could have been missed.  Otherwise, the picture quality was great.

Audio – The disc was done in English 5.1 DTS-HD Master Audio with a quality that was also top of the line.  Subtitles are available in English, Spanish, or English SDH, though no other options or choices are available.  The soundtrack was pretty fantastic, with a nod to Fight Club‘s final scene with a well-placed song, and strong music throughout.

Extras – There are many special features available on the Blu-ray.  The film can be played accompanied by audio commentary with Eli Roth, Lorenza Izzo, Nicolas Lopez, and Colleen Camp.  There are two deleted scenes that can be enjoyed with audio commentary, played together, or viewed separately: Destruction, which details the ransacking of the house in more detail, and an Alternate Ending, which gives us one last look at what might happen at the end of the film.  The Art of Destruction: The Making of Knock Knock is a 14-minute behind-the-scenes peek into the founding of the film.  There is a Still Gallery for your entertainment.  Also From Lionsgate holds four trailers: John Wick, The Last Exorcism, Cabin Fever, and the Saw series.  Lastly, Bookmarks are available in the menu and can be toggled here. Recommended.  Knock Knock is a nightmare metaphor with a ton to say.  It pushes the envelope of the classic bitter mistress story and becomes something much more vibrantly allegorical.  It’s both fun & terrible to watch, hot & repugnant, representing bad choices made flesh, and not apologizing for making audiences feel basically awful.  Too bad the cast & crew didn’t hold up when given an absurdly interesting plot, or we might have had a cult hit on our hands.  As it was, Roth tried to be a better director than he might be, while Reeves pretended to be a better actor.  With the side characters not pitching in either, this film became a cool concept poorly executed.  The video was pretty excellent, except for one glitch, the audio was strong as well, and the Blu-ray has a ton of extras.  Watch for something unusual, something that refuses to play nice, but don’t expect perfection.