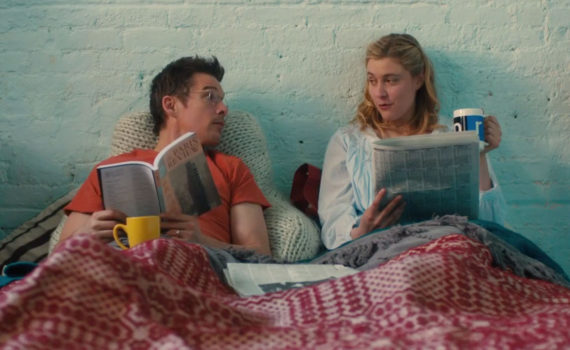 Greta Gerwig is an acquired taste if ever an actor was one, an anxious, needy, New York taste that rivals Woody Allen for specific neurosis & unconventional humor.  She has two characters really, a quirky, indie sidekick and a undefinable leading lady, both of which take a mother or an exact replica to love.  Hannah Takes the Stairs, Greenberg, Frances Ha, Mistress America, and now Maggie’s Plan; Greta doesn’t always star in movies, but when she does, she stars as a confused pseudo-academic who can’t figure out life, men, apartments, or basically anything.  She’s too approachable not to be likeable, but once you’ve approached you too often feel the need to find an excuse to leave, which is exactly the mood she infuses into her films; a cool, comfortable hook followed by a persistent annoyance that should warn us off but never seems to. Maggie wants a baby before she turns into an old, single maid and is willing to do something about it before time runs out.  Her friends Tony & Felicia try to talk her out of it, but Maggie is determined; she’s going to be a mother if it’s the last thing she does.  So she turns to an old friend from college, a weird one perhaps, but a nice guy who is willing to be a sperm donor, which is really the only qualification.  Guy is a pickle entrepreneur, an ex-mathematician, a recreational ice skater, and the best candidate Maggie is likely to get.  So Guy comes over, makes a deposit in a cup, hands it over to Maggie, takes a selfie, and a new life has become, albeit one that is guaranteed to be screwed up.

But that’s only the beginning of the story, and for Maggie, only the beginning of a complicated love affair.  And not with Guy, he’s out of the picture, rather with an adjunct professor & amateur novelist named John Harding, a partially-brilliant & oddly charming man who’s only flaw is that he is married.  Not happily though, as his wife is an over-bearing Austrian intellectual who often leaves him alone to take care of their two children and wallow in his own lack of self-worth.  Maggie & John begin a romantic love affair ending in his divorce, and all ought to be happily ever after.  Except, Maggie, who has the habit of falling out of love quite easily, thinks John would be happier with his ex Georgette, a woman who now hates them both.  C’est la vie, right? I can’t tell if this is more a copy of Woody Allen or Noah Baumbach; six one way, half a dozen the other, I guess. That’s a knock on Baumbach of course, not Allen, and I guess a knock on Rebecca Miller as well, who’s only other mild success was 2005’s The Ballad of Jack and Rose, which is a far cry from Maggie’s Plan.  Here, she seems to channel/homage/steal the anxious, academic, adulterous New York lifestyle that has been so popular in so many movies over the years ever since Woody used his genius to define the genre.  Perhaps this could be considered a feminist perspective on that man’s world view, but that’s about all the originality I’m willing to concede to this film.  Otherwise, a lot of the same kooky comedy & complicated love affair plot lines pop up, until audiences are left with the feeling that they’ve seen this all before.

I just can’t get behind Greta Gerwig either, as much as I’ve tried and failed.  She really does suck you in, gain your trust in trailers, appeal to you with that odd personality of hers until you are just dying for her to be great.  But she’s not, she’s one-note, and the song directors are adding her voice to is starting to get on my nerves.  Now, there were one or two moments in this film where I laughed uncontrollably, one in bed reading horoscopes that I actually think might be some of the funniest ten seconds in movie history, right up there with Robin Williams welcoming his guests to a dinner party in Birdcage.  Miller’s timing was often spot on, so I’ll give her that, and Julianne Moore, who I’ve called the worst actress of our time, was as good here as she was in The Big Lebowski, her crowning achievement.  Ethan Hawke was solid, Bill Hader & Maya Rudolph are too lovable not to enjoy in their cameos, and the film as a whole was an entertaining comedy when taken at face value.  It wasn’t special though, wasn’t unique, and mirrored too many others to be considered something remarkable. Video – With an aspect ratio of 1.85:1 (1080p HD), the video quality of the Blu-ray disc might be the best part of the film.  The color palette is a yin & yang of warm & cold; the glowing interiors with exposed brick and album covers, the freezing parks of the city and snow-covered landscapes.  The characters themselves stand out on video as well, decked in coats & scarfs, their clothes defining them in many ways.  The entire film is set during winters, which doesn’t dampen the use of color and the high quality of the picture.

Audio – The Blu-ray was done in English 5.1 DTS-HD Master Audio.  Many language options are available on the disc: English Audio Descriptive Service, Russian 5.1 VO, Thai 5.1 Dolby Digital.  Also, subtitles are available in many languages: English, English SDH, Chinese Simplified, Chinese Traditional, French, Russian, Thai.  There’s a nifty little theme song that runs underneath, but other than that the audio is forgettably fine.

Extras –  There are many extras on the Blu-ray, if you don’t give up and are thirsty for more.  Commentary with director Rebecca Miller can be activated to accompany the film.  Controlling Fate: The Making of Maggie’s Plan is a 15-minute behind-the-scenes featurette.  Outtakes is a 7-minute compilation of extra footage.  Q&A at the Sundance Film Festival is an 11-minute on-stage peek into that event.  And there are six trailers to watch: Maggie’s Plan, I Saw the Light, The Bronze, The Meddler, Dark Horse, Miles Ahead. Recommended.  Maggie goes almost three years without meeting John’s ex-wife, even though she is always driving Georgette’s kids around the city, to & from school, home after activities, the normal co-parenting stuff.  That really bothered me, as did that we only saw the characters in the winter, though I understand that to be a directorial choice.  Little things annoyed me about this film, just as often as little things completely cracked me up, so all in all I’d have to say Maggie’s Plan was a complete tossup.  It screams feminine Woody Allen, which is understandable given the current current, in which women are finally getting their due.  Fine, but it’s not enough to pay homage & cast Greta Gerwig, we need more.  The video was pretty excellent, the audio fine, and there are plenty of extras to enjoy.  But I can’t recommend Maggie’s Plan with much conviction; it was too flawed and too done, funny often but not much more than that.