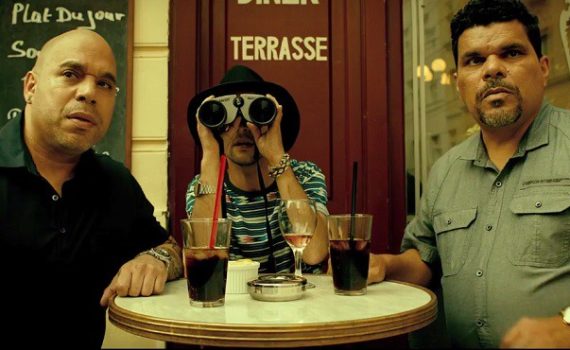 I took a flyer on Puerto Ricans in Paris being funny.  It was not.  In fact, it was one of the most boring comedies I have ever seen, failing even to be dumb enough to be laughably bad.  It was as if every brainstormed scene that worked in the imaginations of the writers was crammed into the trailer, which I actually though was funny, but then someone forgot that most movies are around 90 minutes long.  When they stretched out the plot & humor, there was only enough to fill about 3 minutes of footage, so they flubbed the rest and hoped the trailer would be enough.  Having now watched the whole film, I can say with some confidence that it wasn’t.  Audiences can’t be expected to sit through an hour & a half of Luis Guzman attempting to save a dying movie, when really what would have been best was to just put it out of its misery.

Eddie & Luis are partners on the New York City police force, detectives in what many consider the best squad in the world.  Luis is the brains of the operation, planning out the stings, working the suspects, going out on the town with the beautiful woman after all is said & done.  Eddie is a brawn, a sweet but not so brilliant muscular Puerto Rican who values family above all else.  He’s a constant disappointment to his wife Gloria, who happens to be Luis’ sister, but he loves her, works hard to support their three kids, and is one of the good guys of the world.  When Eddie & Luis are asked to take charge in a new crime investigation, their roles & their relationship are about to be pushed to the limits.

A famous French purse designer has just been stolen from.  Her name is Colette, she’s a genius in the fashion realm, and everything rides on her upcoming show.  Unfortunately, the prototype bag, one of only two in the world, has been stolen and is about to be mass-produced, flooded to the underground markets, ruining her career.  Only four people have access to Colette’s workroom, so it must have been someone she knows.  The French are no good at quick crime solving, so Colette turns to NYC’s finest to catch the crook before she either has to pay a large ransom or see her fame & fortune go up in smoke.  Our boys are off to Paris to crack the case, snag a handsome reward, and make it home before dinner.

The best thing that can be said about Puerto Ricans in Paris is that it isn’t very racist.  From what you might imagine, you’d be surprised how little Latino or French jokes are made, and there’s actually only one short-statured, obviously gay, Parisian fashionista who makes an appearance; someone was holding themselves back.  But as much as that control should be lauded, I guess, what we were left with was a movie with absolutely no soul, not even a dark one.  From start to finish, this film is not funny.  And, what’s more, it barely even tries to be, when trying & failing would have at least been something.  Puerto Ricans in Paris is just as dull as its title, offering nothing to enjoy and not even much to criticize, becoming something rather empty, unnecessary, and blah.

I say there’s not even much to criticize, but let me give it my best shot. The most obvious target is Edgar Garcia, who literally couldn’t act if you told him to just stand there looking silly and every once in a while say whatever comes to mind.  Actually, that seems to be exactly what the director told him to do, and he still came off as talentless as a set decoration.  He’s only kind of an actor, I don’t even know why he is here, and he utterly ruins what would probably have been a bad movie anyway.  Alice Taglioni wasn’t much better as Colette, the pair of them coming across as Pitbull & Heidi Klum thrust onto a sound stage, handed a script, and asked to make magic.  The only person capable of making this stupid plot & juvenile humor work was Luis Guzman, who at least seemed to be trying his best, but even he couldn’t save the unsaveable.

Video – With an aspect ratio of 2.40:1 1080p HD Widescreen and shot using an Arri Alexa camera, the video quality of the Blu-ray disc might be the high point of the entire film.  The picture was nice & clean, but did have an odd yellow tint that was distracting.  It was as if the director wanted to make Paris look more foreign so we’d believe these guys as fish out of water, so he said “you know what, I’ll ask for a yellow lens to be put on the camera, that’ll do it.”  Nice try, but bad job.

Audio – The Blu-ray was done in English DTS-HD Master Audio 5.1, with an option of Espanol DTS Digital Surround 5.1.  Also, subtitles are available in English SDH, Espanol, or Francais.  The audio quality of the film was fine, but the song selection was much too forced, going with beats set to slo-mo video far too often to express how funny a scene ought to be.  The problem was, they never were. Rent It.  I wish I could at least say that Puerto Ricans in Paris was insultingly horrible, or incredibly over-the-top, or stereotypically stupid, but I can’t.  It’s not much at all, which I think is a bigger problem.  There’s not much here to hate, but there’s also absolutely nothing here to love, creating an awkward situation where no one should see this movie, but there’s no colossal reason not to see this movie either.  As it is, perhaps you have 90 minutes to kill and you like Luis Guzman.  Then, perhaps, you’re in luck, just try not to pay attention to the rest of the film.  The video is good, the audio is fine, and there aren’t any extras on the Blu-ray.  Stay away unless you want to “veg out”, because this is a movie that won’t elicit many emotions whatsoever, good or bad, and probably shouldn’t have been made in the first place.