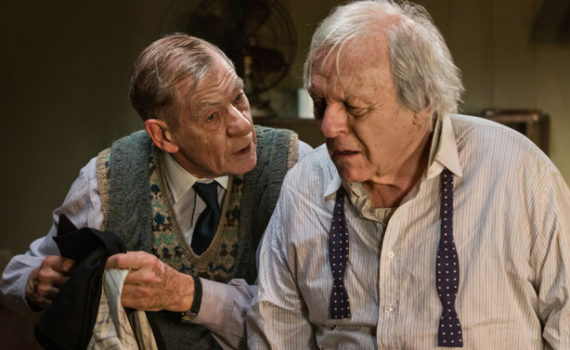 As the storied careers of both Ian McKellen & Anthony Hopkins approach their inevitable ends, The Dresser acts as the perfect showcase for two of the best actors of the 20th century.  Both knighted as Commanders of the Most Excellent Order of the British Empire by Queen Elizabeth II, McKellen is 77, Hopkins is 78, and each has a filmography to stun the senses, ignoring their various other efforts on stage and in their respective communities.  McKellen is best known, in recent times anyway, as Gandalf the Grey, but his roles in other films over the years are equally impressive: Gods and Monsters, Apt Pupil, X-Men, Mr. Holmes.  Hopkins will always be Hannibal Lecter, but can also be remembered for other successes: The Bounty, Amistad, The Human Stain, Noah.  These men are pillars of cinema, will not be on the screen forever, and have perhaps never been more impressive than they are here. In the last days of World War II, when air raids had become as commonplace as afternoon tea, an aging actor begins what could be his final performance.  It’s King Lear tonight in the provinces for this traveling company, and tomorrow it will be Richard III, just another stage in another town on another stop of this never-ending tour of England’s Shakespearean circuit.  The company has been depleted by the war, with young men becoming scarce, leaving women to play the roles of men, the antithesis of how Shakespeare himself composed his casts.  Our lead actor, known only as ‘Sir’, begins the ritual that he has played out over two hundred times, bearding himself with faux hair and cold madness as he prepares to become a lunatic king once again.

But this time is slightly different, as a weight and a sadness has descended upon him, the end of his career & life drawing nearer and nearer with no guarantee that it has all been worth the work.  Sir’s devoted dresser, Norman,  is by his side through it all, through the crying fits and the deafening rages, there to hold out the dressing gown so Sir does not catch cold.  In the wings, his long-devoted lover, Her Ladyship, the cynical stalwart by his side.  And in the audience, yet another crowd demanding yet another tale, this time under the rattles of the blitzkrieg, where death has never been so near.  Norman will see that Sir takes the stage on time, though his health & wits deteriorate, because, what else has he ever done? These two theatrical & cinematic geniuses have perhaps never been better than in The Dresser, a BBC adaptation of the 1980 play, a play that was crafted into a film in 1983 as well, starring Tom Courtenay & Albert Finney, directed by Peter Yates (Bullitt, Breaking Away, Year of the Comet).  This particular adaptation looks & feels very BBC, like a live performance but a play within a play.  The cinematography is such that the room often feels like a three-walled box, just as it would on stage, the audience playing the role of voyeur.  We see very little action outside of Sir’s dressing room, getting a few glimpses backstage and of the stage from the wings, but mainly keeping our focus set on the main action within Sir’s quarters.  This keeps the pace quick, the target aimed at the meat of the movie, and makes for an easy watch, an enjoyable film.

But now, back to the two leads, who are the main reason for watching, despite the excellence of the set up & delivery of the film itself.  Both men are veterans of the Shakespearean stage, and either could have played either role.  McKellen was King Lear in 2008 actually, but plays the dresser here, for a man who has taken the role to heart too much.  He is a phenomenal Norman, Courtenay playing the part with effeminate airs in 1983, McKellen attempting much deeper subtlety, but still allowing us to see his love for his master.  Hopkins as the mad actor playing a mad king was perfection, a pillar of strength and a collapsing mass by turns, allowing the characters around his to use him as a way to reveal themselves, making the film that much greater.  Emily Watson delivers a solid performance, as does up-and-coming Vanessa Kirby and consummate professional Edward Fox, who was in both versions.  The Dresser is a small cast, short duration BBC production that will knock you back a pace with its simple message, its lovely backdrop, and its incredible acting.  For thespians of the lowly venues and aficionados of impactful theatre, this is a must-see film. Video – With an aspect ratio of 1.78:1 (Anamorphic Widescreen Presentation) and shot using Panavision Genesis cameras with Panavision lenses, the video quality of the DVD is perfectly suited to the film; just clear enough to be strong, just BBC enough to be authentic.  The color palette is very brown, gold, and grey, the colors of aging, and is well-tailored to the story.  Scenes are crisp, action is precise, and I have no complaints with the picture.

Audio – The disc was done in Dolby Digital 5.1, with an option of English SDH or Spanish subtitles.  The audio quality was fine, with some nice Carol-esque music in the background, really setting a somber mood.  The sound was delivered nicely on the DVD, with no problems in transfer.

Extras – There are two special features on the DVD.  From Stage to Screen, a three-minute behind-the-scenes segment featuring the concept of the television movie and the duo who made it magic.  And Master & Assistant, a three-minute peek into the relationship that defines the film. DVD Talk Collector Series.  McKellan & Hopkins had never worked together until The Dresser; another reason to love this movie, it brought these two giants together.  McKellan has said that he would have taken any role, on any project, just for the chance to star alongside Hopkins.  The pair of them were brilliant, and the beauty of the theatre was captured here in a way that made me long to be an actor, to live the life fantastic upon a stage.  I’ll settle for watching these men and their capable co-stars though, all the while feeling as if I am in good hands.  The video quality of this DVD is top-notch, the audio fine as well, with a few extras for those looking for a bit more of an inside look.  The Dresser is the greatest film I have had the pleasure of watching this year, the first one I have loved rather than simply liking, a marvelous combination of theatre & cinema that should not be overlooked.