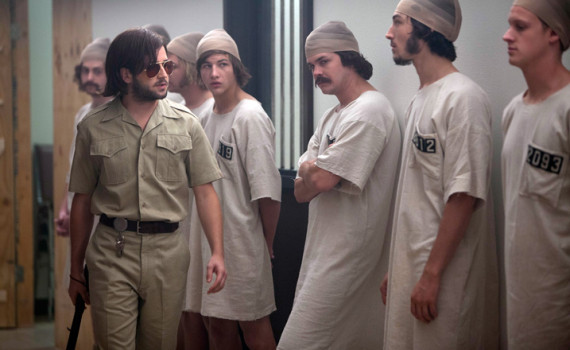 One of the most influential & stunning psychological experiments ever run, Dr. Zimbardo’s Stanford Prison simulation revealed more about the human mind than even he could have predicted.  Zimbardo thought that the experiment would be extremely boring to facilitate, watch, & study, that the results would be academic perhaps, but not dramatic.  Well, 44 years later we’re still talking about the implications of the study and making movies based on the actual events; I’d say drama made an appearance.  The scenario didn’t play out the way researchers imagined it would, mostly because the human element can never be predicted.  But what is most shocking is the direction in which humanity headed given the parameters of the experiment, how animalistic we can become given freedom to do so, and how cruel we can so easily be to each other. During the summer of 1971, Dr. Philip Zimbardo, with the help of a team of graduate assistants, began a simulation to recreate the dynamic between prisoner and guard.  The idea was to observe the relationship between those in power and those who are powerless, to see how fluidly humans can slide into a role when even they know that the habitat they find themselves in isn’t actually real.  An ad was placed in the newspaper, 24 Stanford students were chosen to be part of the paid program, a coin was flipped to decide which young man would be a guard, which a prisoner, and the group was given two weeks to perform their duties & receive their salary.  It began as play acting in the basement of the psychology building, a summertime fling for students with nothing better to do, but it quickly became something much more sinister.

The actions of the guards and the reactions of the prisoners were something that Zimbardo didn’t predict, as the basement rapidly took on the appearance & mood of an actual prison, and the volunteers began to turn into their roles, even knowing that this was all make believe.  The guards began using force almost immediately, locking prisoners in “the Hole”, forcing them to strip naked, hogtying rule breakers.  Prisoners were forced to defecate in buckets in their cells, to stay awake through the night, to debase themselves continually.  And all the while the psychology team watched as events became more out of hand, as the guards’ power became something god-like, and as everyone involved forget that this was all pretend.  The experiment was meant to last for two weeks; it was called off after 6 days of hell.

The Stanford Prison Experiment is one of the most fascinating studies in history, right up there with Milgram’s fake shock treatments, showing us how easily humans turn into sheep and how naturally those with power abuse it.  This really happened, which can’t be repeated enough, since it’s so incredibly unbelievable.  The guards really treated the prisoners this way, taking the guidelines of the study and perverting them into carte blanche to become all-powerful and cruelly authoritative, enacting the violent passions that were apparently sleeping inside each of them.  A coin flip determined which young man was a guard, which a prisoner, and yet when put in charge, each “officer” exhibited enjoyment in his role, indifference to the real terror he produced, and a complete willingness to violently dominate in a way that was never intended.

It’s a study that could take a lifetime to fully understand, though the bare bones are easy enough to see; natural abuse of power, compliance with authority, fear as a tool.  Even the researchers became a part of the project, playing certain roles (warden, superintendent) and watching it all fall apart with an eye to their work, never to the psychological damage inflicted upon the subjects.  The film made Zimbardo out to be a bit more of a genius and less a facilitator to violence than perhaps is accurate, proposing that no harm was actually done after the six long days.  Judge for yourself, but the movie takes a back seat to the reality of the experiment, and it’s the story itself that should hook you.  The actors did a fine job: Crudup, Angarano, Miller, Tye Sheridan, Thomas Mann (although Olivia Thirlby in a small role had literally one of the worst performances I have ever seen in a feature film).  The direction was solid, the pace nice, the plot kept interesting.  But it’s the true story that makes the film, delivered well, and crafted to stick with you long after the credits roll.

Video – With an aspect ratio of 2.40:1 Anamorphic Widescreen, the video quality of the film is higher than the time period of the action allows it to appear.  The movie was shot using a Red Epic Dragon camera with Panavision Primo and Leica Leitz Lenses.  And while the quality of camera & disc are there, the 70s plot requires a graininess that couldn’t be denied.  The color is muted, very corduroy, and the clarity is purposefully muted.  Don’t judge the film on its lack of brilliant definition, but instead give it credit for knowing just how to visually bring this real event to life.

Audio – The DVD was done in Dolby Digital 5.1, with an option for commentary from director Kyle Patrick Alvarez.  Subtitles are available in two languages: English SDH & Spanish.  The audio quality of the film is fair, without suburb sound but with a respectable balance.  I didn’t notice any intentional muffling to go along with the time-specific video delivery, as the sound becomes background & mostly ineffective.

Highly Recommended.  Although it won’t win any awards for ground-breaking originality, The Stanford Prison Experiment is a solid visualization of an actual event, a fascinating look at one of history’s most telling simulations.  What the tests say about inherent abusive tendencies is frightening, as is the ability for humans to fall meekly into line when convinced of authority.  The plot is far greater than the delivery, making the film a strong vehicle for a point, but not a spectacular item on its own.  The video was nicely dated, the audio unnoticed, and the extras only slightly interesting.  Don’t look for this film during Oscar season, as the content beats the production, but give it credit for educating us on an important discovery, something perhaps we should all know about our potential.