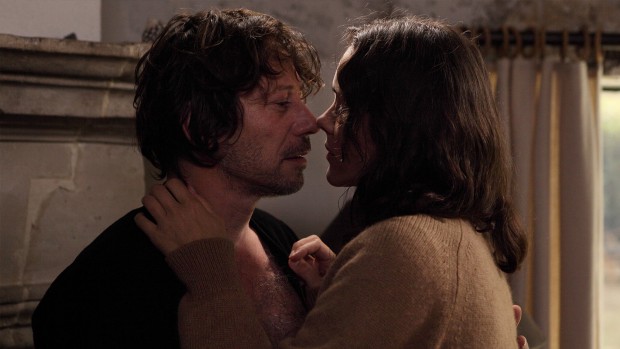 The films of French director Arnaud Desplechin are tied together in ways I can’t comprehend; there’s a scene in this movie in which a filmmaker who is losing control is seen to have an attic filled with pictures and strings and connections and models, basically the artistic headspace of a mad genius, and I imagine Desplechin working in the same way.  You have to be a little mad to be so talented, it’s like true vision and manic production lie under a contaminated surface that artists must choose to reach through if they want to become famous.  Anyway, Desplechin sees things and plots and metaphors that we don’t, and he captures them on camera; they just don’t always make sense to us.  Such is the case with Ismael’s Ghosts, a movie that I can’t begin to make heads or tails of, and frankly don’t want to take the century to figure out. Ismael is a filmmaker, a relatively famous one at that, but a bit of an unhappy soul, an extreme man who can be wonderfully spontaneous and outgoing or filled with rage and melancholy.  He is dating Sylvia, a woman who is his polar opposite; a scientist, a pragmatist, religious, prudish.  But she opens up to Ismael, he finds happiness in his relationship with her, and the two have a pleasant life together.  Ismael was married at a young age to an unusual girl named Carlotta, the daughter of a visionary director who Ismael respects, Henri Bloom.  The two men still love and talk about Carlotta, who ran away twenty years ago never to appear again, her death made official but the grief over her disappearance as yet undying.  Still, life goes on, people change, and movies are made, regardless of past problems.

Ismael is working on a new film, a story inspired by his brother Ivan who works for the government in embassies overseas.  The character Ivan Dedalus is a spy, or at least people think he is, and he has adventure in his life, something that Ismael lacks a great deal.  But while writing the script at a vacation home, with Sylvia along for company, Ismael will be visited by adventure in a form he thought he’d never see again.  Carlotta comes back, twenty years older but still beautiful, and threatens to tear Ismael’s current life apart.  Sylvia is concerned, obviously, and Ismael is conflicted; he still loves this girl, after all the pain she caused him by leaving, and can’t be sure what to do next, what the smart decision would be.  Ismael will face his past, which destroys his present, and puts the future of his film in jeopardy. Ismael’s Ghosts is everything you’ve imagined over-dramatic French cinema to be.  Hopefully you’ve pre-judged a foreign film before and been surprised by how much you were wrong, but that won’t be the case here; Desplechin delivers every stereotype and melodramatic moments that you’ve been dreading would appear.  Drinking wine, screaming the lines, a chopped up plot, overlong run time, voracious affairs, female nudity, a story within a story, gunshots, spies, little cars; I don’t know if he was intending to create something so obscenely Franco, but he succeeded.  It’s all the cliches rolled up in one movie, and the result is a very difficult watch.  IMDb has the film’s length at 114 minutes, the DVD is 134, but I’m not sure it matters; any amount of time was too much for this messy of a movie.

I have seen one other Desplechin film, My Golden Days, and I didn’t really enjoy that one either; it was tedious and absurd, much like Ismael’s Ghosts.  Critics seem to like his movies though, and I don’t understand; they are too much work to watch and not enough reward.  I don’t mind artistic-minded features, please don’t get me wrong, and I like French dramas, the weight of their emotion.  But Desplechin just gets it wrong, misses the mark, and I’ll never quite understand him.  The acting in this film is fine, better than fine, very good even, but it fails to matter, because the movie’s story and its presentation become much too loud and distracting and wrong-headed.  Amalric is passionate, Cotillard is troubled, but I’ll never be a fan of Gainsbourg, she’s much too difficult to watch, much too dark to ever convince me that her characters have more than one side.  The timeline jumps all over, the scenes from the film in Ismael’s head are unnecessary, I wanted a simpler drama to witness, and from start to finish nothing pleased me in the way that it was meant to, nothing stood out as something worth my time and emotional effort.  If you want a quality film with two common actors, watch From the Land of the Moon, starring Marion Cotillard and Louis Garrel; it’s heavy but in all the right ways, not like Ismael’s Ghosts.

Video – With an aspect ratio of 2.40:1 (Widescreen), the video quality of the film is fine, but not the focal point.  I mentioned the run time; apparently this DVD is the “director’s cut”, which is not specified on the case, and I’m sure didn’t help with the flow and feeling of the movie, which would have been hard to dive into anyway, even at a shorter length.  The cinematography is never a noticeable attribute to the film, the visuals fail to capture audiences who are simply being overwhelmed by powerful dialogue or confused by yet another time jump.

Audio – The DVD was done in French 5.1 Dolby Digital, with subtitles in English, English SDH, and Spanish.  The audio quality is middle-of-road, with nothing to comment on negatively.  There was a nice thread of music throughout that aided in developing the sadness of the situation, so some credit should go to the team who created the score, because that does stand out, when none of the other audio did.

Extras – The only special feature on the disc is Also From Magnolia, three trailers for other Magnolia films. Rent It. With scattered, unfocused, and overbearing themes, Ismael’s Ghosts is a job, not a pleasure, and shouldn’t be watched flippantly.  Those who already enjoy this director could take a stab at it; they should be familiar with his style and his penchant for melodrama.  I simply don’t enjoy his methods, and I get lost trying to follow his ideas, instead of losing myself in the moment.  His artistry is undeniable, but sometimes you don’t like the art that you can see is strong, it just doesn’t hit you in the place it is supposed to and where others seem to feel it.  The acting is solid, the music is nice, but the film lags behind its own goals, doesn’t resolve, and too often meanders around like a lost old man trying to find where he put his glasses.  The video is fine, the audio is good, there aren’t many extras, so the technical side is a mixed bag, and shouldn’t really be relied upon to impress you.  I would recommend that most people pass on this movie; rent only if you’re confident in what you already like.