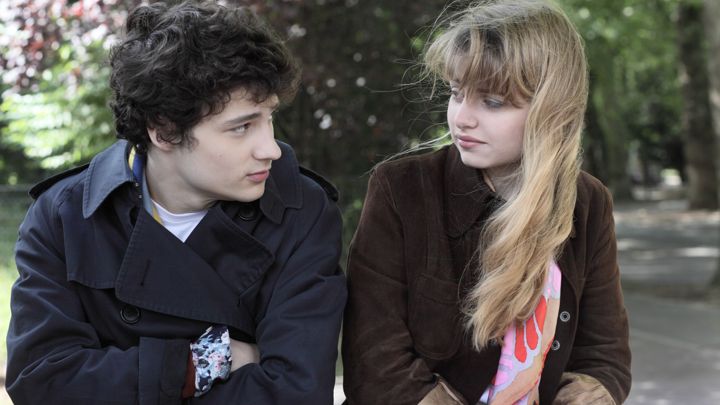 Rarely is my take on a movie so distant from the ratings of both audiences & critics, though with a film like My Golden Days, one can assume that the few who have rated it on social sites are critical moviegoers, not your average audience members.  But the fact remains; I felt about this film the reverse of what advertised opinions seem to be, and in trying to understand that I’ve come to the conclusion that it has to happen every so often.  This film is an artistic French romance, a slow-moving portrait of a life, of life, rather than a poignant love story.  On the surface, I assume I would like these aspects, but in reality I could not, finally left with no other option than to disagree with my colleagues and call this movie an unsuccessful & mostly unnecessary attempt. The life & times of Paul Dedalus, as told by the grown-up version of the adventurous youth, are a combination of exhilaration & heartbreak, and can be broken up into three chapters.  The first is that of Paul’s childhood.  His mother was unwell and eventually died young, his father was depressive and distant, his siblings clinging to anything that would keep them afloat, Paul’s life in a small town in France something that smothered rather than protected.  The second chapter is his first great adventure, with a class to Russia in which his political & social beliefs could be developed, helping the Jewish movement there even though his involvement could mean trouble and gained him nothing in return.

But the section of Paul’s life that changed him the most and defined his existence, even standing out after all these years, was the time he spent with Esther.  The girl who could have any guy, Esther chose Paul as her port in her own personal storm.  Unusual to a fault, Esther was nevertheless beautiful, fascinating, and full of love, be it often in unhealthy ways.  Her relationship with Paul would take up many years of his life, but would also teach him about passion in a way that reading about it in poems could never fully express.  To love with all of your being is a dangerous & frightening thing, but can also be the best part of living, so Paul & Esther would discover, as the world revolved around them. My Golden Days receives a much higher critical rating than does Amelie, something I can not possibly accept.  Amelie is love looked at from a unique perspective, film created in an unusual way, something magical & mysterious that has always captivated me.  My Golden Days plays upon that same stage, but fails to fully commit, and so falters.  It’s a dark & often depressing film, with a sad look at giving too much of one’s self.  But at the same time it flirts with the absurd, giving us speeches to the camera, dream scenes, ghosts.  It tries to straddle the line between art house & melodrama, but can’t decide which path to follow, resulting in an up-and-down take of love & woe.  I always desire films to put themselves in a kind of balance, juxtaposing tragedy & comedy, but this movie failed to walk that fine line in a way I could enjoy.

The story is presented as being in three parts, when it all actuality, it’s only the third that is given any attention at all.  Paul’s childhood is passed over quickly, his Russia trip blasted by, and even his adulthood barely shown, when that was probably the highlight of the film.  His love affair with Esther during his college years dominates the storyboard and so tipped the film over when it was trying with all its strength to stay steady.  Had there been a more even distribution of time given to Paul’s life, I would have found the film easier & more entertaining to watch.  As it was, the movie grew tedious far too quickly, with not enough to love and too much to find fault with. Video – With an aspect ratio of 2:40:1 Widescreen and shot using a Red Epic Dragon camera with Hawk V-Lite and Angenieux Optimo 2S lenses, the video quality of the film was quite nice, with an admirable clarity and a nice use of color throughout.  The film was visually pleasant, boasts great cinematography, and won’t be criticized for its appearances.

Audio – The disc was done in French 5.1 Dolby Digital with an option of subtitles in English, English SDH, or Spanish.  The sound quality and music of the film were quite excellent, with a nice balance and use of background songs.

Extras – There are quite a few extras on the disc.  Casting Session: Paul & Esther is a 4-minute taping of an audition by the two leads.  Two Pauls and Three Esthers is a 12-minute conversation with the actors.  A Conversation with Director Arnaud Desplechin is a 14-minute sit-down with the film’s creator.  And there are four trailers to enjoy: My Golden Days, The Lady in the Car with Glasses and a Gun, Sunset Song, The First Monday in May. Rent It.  I wish I had enjoyed My Golden Days as much as other critics seem to have, but alas I did not.  The elements are all there; a love story, a look back, beautiful scenes, a touch of sex, a heavy dose of adolescence.  But the way the film was laid out smacked me as dull more than ingenious, and I could never love it the way I have other French dramas.  The video is of the best quality, the audio very nice, and the extras plenty.  But the film itself didn’t win me over, and whether that was because I still want to like movies as an audience member as well as a critic or because I hold films like Amelie to a too-high standard, I’m not sure.  Regardless, this movie did not wow me in the way it did others, and were it more popular in America I would be curious to see how audiences reacted.