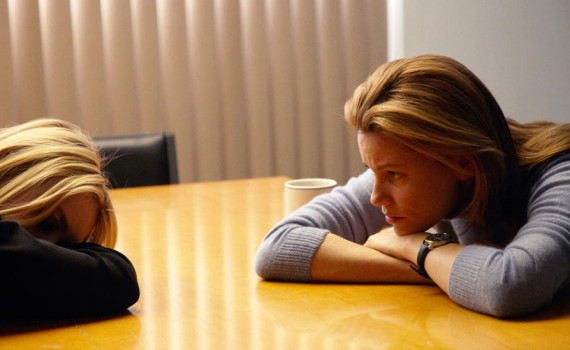 Every Secret Thing could be seen as the all-female version of Prisoners, a dark thriller done a year & a half earlier.  Many elements of the story are the same; a kidnapped child, an obvious suspect, a troubling history, distraught parents, a cop who won’t give up.  But Prisoners took the story to a vicious place, very physical and angry; masculine qualities perhaps, if you care to define them that way.  Every Secret Thing took a similar plot and took it down a different path, presenting the story emotionally, painfully, regretfully, and with an air less of action and more of feeling; a feminine approach perhaps, again, if you want to see it from that angle.  Prisoners was directed, written, and starred by males after all, while Every Secret Thing was the exact opposite.  So, not to say that both sexes can’t appreciate both movies, but here are two different perspectives of a common theme, each done in their own style, and each ultimately succeeding. Several years before the majority of the action of the film, a terrible event occurred that not only damaged Orangetown, but resulted in the death of an infant girl, while also nearly-ruining the lives of two young locals.  Alice & Ronnie, though not very close friends, attended a birthday party together.  And as a result of their not fitting in and an inability to control their anger, they were asked to leave.  On the way back home, they would do something so terrible that it would haunt numerous people for many years to come.  Alice & Ronnie took an unwatched baby from her carrier, hid her away in a forgotten part of the woods, and attempted to keep her as their own.  The baby’s resulting death would lead to the arrest of both the girls, stopping their futures before they had even started and destroying the happiness of a young family whose daughter was their life.

Fast forward and not much has changed.  Alice & Ronnie are released from jail having served short sentences after being tried as minors.  Alice’s mother Helen still finds her to be imperfect, while Ronnie’s family is too dysfunctional to care.  The detective who found the deceased infant all those years ago is still a cop, and the town hasn’t completely forgotten that terrible tragedy.  And so when another child goes missing, this one three years old, memories of the event resurface, especially considering the pasts of two young women who are recently home from prison.  Detective Porter, along with her partner Detective Jones, take the case, following a series of events that are eerily similar to those that came before.  And while Alice & Ronnie quickly become their main suspects, their main priority is finding the little girl before she suffers the same fate. It’s a plot that’s almost too heavy to hold, especially for parents of young children, becoming almost too personal.  With a story like this, and like Prisoners, divorcing yourself from the action in almost impossible, at least not completely, and a part of you can’t help but be in the shoes of the parents in the film, living their pain along with them as you imagine what it would feel like to lose a child.  Not a great way to spend an evening, but it’s also a sign of a well-told story.  Every Secret Thing asks us to feel what the characters are feeling, to be empathetic to the terrible events shown twice over, to participate in the action, not just follow along.  And in that way, it becomes a difficult film to watch, while still being a solid film to view.  Director Amy Berg kept a pace that kept us invested, a mood that was dark but not unbearable, and was somehow able to suck us in without making our involvement too painful.

But without strong acting, the plot might have become too depressing to watch.  Luckily, the actresses that made up the cast were all up to the task.  Elizabeth Banks, as the main character, was able to shoulder the load and deliver one of her better performances.  I’ve never seen her shine brighter than in Little Accidents, but this could be her second best delivery to date.  Diane Lane as the troubled mother was spot on, giving us reason to hate her while also understanding that she didn’t have much to work with.  And the girls, Danielle Macdonald & Dakota Fanning, portrayed their characters very differently but with very quiet tremors of emotion that made them both believable and sad.  That’s as good a way to sum up the film as any; believable and sad, with an emotional touch that kept it from becoming just another kidnap thriller, allowing it to stand on its own as something a bit more. Video – With an aspect ratio of 1.85:1 Anamorphic Widescreen, the video quality is just strong enough to avoid notice, while never becoming anything that attracts positive attention either.  The picture quality is fine but unremarkable, good but not great, and without key shots that will impress those looking for solid cinematography.

Audio – The DVD was done in Dolby Digital 5.1, with an option for English SDH or Spanish subtitles.  There are no other audio choices.  The sound quality was also fine but not amazing, as the technical aspects of the film were secondary to the weight of the story and the precision of the acting.  There were no noticeable sound or balance flaws. Recommended.  With such a frighteningly possible plot, the story itself is enough to gain the movie a few fans, those people who, like me, were drawn into the darkness and left there to put ourselves into the action.  But what the film did to take a step higher was to pair that hook with a good director, develop an emotional base that goes beyond the sadness, and then cast a team of quality actors who could hold up under all that pressure.  Every Secret Thing may not be award-winning perfection, but it succeeds in what it set out to do, crafting a emotional look at a common idea that would otherwise have been easily put aside.  The video quality was only OK, the audio not much better, and the extras on the disc weren’t very impressive.  But the ability behind the film was, and while it won’t blow you away, the film is well-made and well orchestrated, allowing for some real emotion to filter through.