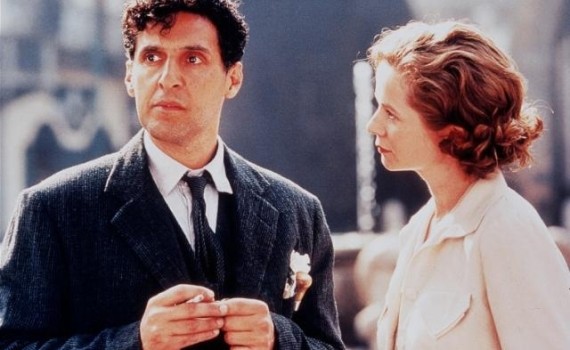 In 1930, Vladimir Nabokov wrote the novel entitled The Luzhin Defense, a book that would be translated into English in 1964 under the title The Defense, and later would be adapted into a screenplay for this 2000 film.  Nabokov is best known for Lolita, written in English in 1955, and made into two films: one in 1962 and the other in 1997.  But while Lolita represents his middle period of work, The Luzhin Defence represents the beginning of his career, when this trilingual artist was still writing in Russian and perfecting his craft.  This film also represents Nabokov’s passion for chess.  He was the composer of many chess problems, or puzzles using chess pieces to obtain a set goal.  Nabokov saw chess as an art form, a challenging endeavor that forces both inventiveness and mental exercise.  The Luzhin Defence is a cinematic example of Nabokov’s dark dramatics combined with his love for the game of chess. The troubled main character of this film is Aleksandr Ivanovich Luzhin, nicknamed Sascha.  As a boy, Luzhin was mistreated and mishandled by his parents; sent to a prestigious Russian school that typically did not take emigres and denied his desire to play chess after it was decided that his poor health was connected to his new-found obsession.  Eventually, and during the complete collapse of his parents’ marriage, Luzhin would be allowed to follow his passion, but specifically under the tutelage of his former teacher, Leo Valentinov.  The pair would begin a European tour, honing Luzhin’s chess skills, proving his ability, but separating him from the family he once knew.  Growing up with becoming a Grandmaster as his only goal, Luzhin would be denied the ability to become a balanced societal member, changing into an unstable competitor whose life revolves solely around a game.

Many years have passed, Luzhin is a grown man, and he travels the world from tournament to tournament, both feeding his obsession and chasing the dream of being the best chess player in the entire world.  At an Italian resort awaiting his next test, he meets the beautiful Natalia Katkov and his life changes forever.  He is smitten with the young aristocrat immediately, asking her to marry him mere hours after they meet.  She, along with her mother, is on holiday and perhaps on the lookout for a fine suitor.  But Luzhin is not what she had in mind, though she can’t help but be intrigued by his oddity and his genius.  As the tournament commences and Valentinov reenters the picture, Luzhin must begin the most difficult challenge of his life, not on the chess board, but within his own mind, with the loss of reality at stake and love the ultimate prize. This film feels 150 years old, not 15, but somehow a talented cast & crew turn that into a good thing.  The action is set in the 20s, with Luzhin’s boyhood scenes depicted many years before.  And so the period piece element is present, but that’s not what makes this film seem so old.  Had you come into it blindly, it would feel like the movie was shot decades ago, so excellently was the effect pulled off.  The dress, the sets, the mannerisms, the accents, the dialogue; it was a modern Casablanca placed years before, filmed years after, but succeeding in producing a classic cinema feel that only needed a signature song to complete the illusion.  But somehow the movie never seemed dated or forced, always felt very proud of its place in time, and gracefully slid across 1920s Italy while actually being filmed in Budapest as we all prepared for Y2K.

Give credit to the actors for pulling off the charade, but also to the author, screenwriter, and director for creating such excellent & timeless characters.  Luzhin was an insane protagonist who we quickly began to understand and empathize with, Turturro playing him perfectly and with finesse.  Emily Watson as Natalia, a part that never receives a name in the Nabokov novel, was both sturdy and realistic, allowing audiences to fall in love with her quirky partner just as she did.  But the character I loved/hated the most was that of Leo Valentinov, played by Stuart Wilson, the consummate villain, whether in The Mask of Zorro or No Escape.  He was brilliantly evil, a terrible human, an antagonist for the ages.  And combined, each actor brought a piece to the film that worked, crafting something smooth that felt classic but brought modern quality.  If perhaps the subject matter doesn’t arouse much excitement, and if the last 30 minutes bring down what was building up to be something grand, the film, taken as a whole, is still an impressive & surprising cinematic feat. Video – With an aspect ratio of 1.85:1 Anamorphic Widescreen, the video is surprisingly lacking in texture & clarity.  The film feels decades older than it actually is, both in presentation and appearance, concerning itself less with visual perfection and more with a classic approach. The picture quality is fair, but unspectacular, much less crisp & beautiful than the year this film was made should dictate.

Audio – The DVD is presented in English 5.1 Dolby Digital, with no other language or subtitle options.  Actually, this DVD has no menu, and so no features can be changed in that way.  The sound quality of the film is as lackluster as the video, but, again, this only adds to the classic feel that the film attempts to convey, immersing us in the period completely.

Extras – There are no extras on the disc, as the disc has no menu. Recommended.  The Luzhin Defence is an oddity of a movie in many ways.  First, the story is about an extremely eccentric character created by a rarely talented man.  This combination of unique genius creates a very intricate dynamic that feels off-putting at first, at least until you begin to care for Luzhin and root for him to succeed.  Secondly, the film seems so old, so dated, and the entire team works hard to pull off a certain classic vibe.  They succeed, which is odd in itself, transporting audiences back in time to the life of an extremely unusual man.  This makes for a surprisingly entertaining experience, but one that is certainly atypical.  With good acting & a unique plot, the film works, but it always feels like an experiment that could go wrong.  The ending does feel a little out of place, but by then the hope is that audiences will be hooked, and I was, partially, enjoying the characters enough to want to know what happens to them.  The video and sound make the story seem so ancient, and the lack of a menu of any sort on the DVD creates a sense of time out of place.  This is a movie made for aficionados, not for the average audience member, but there are pieces here that deserve applause, even if the entire package isn’t perfect.