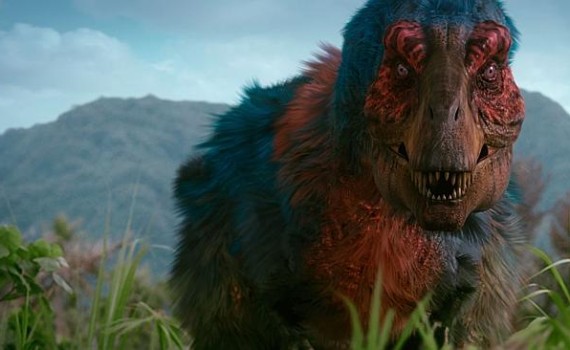 Don’t look up images of this movie with your kids, unless you want them to see some nude women with fake boobs either bathing seductively or being sacrificed to a T-Rex.  I know, strange way to open up a review of a children’s adventure movie, but I thought I’d warn you just in case; there’s another film by the same name that isn’t what your family is looking to rent on a Friday night.  It came out in 1994, and, randomly, I have seen it, so you can read its review here if you like.  It’s a late-night comedy filled with beasts, breasts, and bad acting, as someone once eloquently said.  It’s a film that’s only good at 3am when you’d laugh at pretty much anything, especially a cast & crew who know they’re making something ridiculous and don’t care a bit.  What does all this have to do with Dinosaur Island, other than the shared title?  It helps put this film into perspective, setting it up to be the exact opposite in every way, a kid’s movie that tries way too hard and fails at every level in the process. Lucas Winton is about to have his world turned upside down.  On a flight unaccompanied by an adult, a crystal that he recently found & brought with him sends this 13-year-old boy’s plane through some sort of time/space portal.  When Lucas awakens from his “crash”, he finds himself alone on a mist-shrouded island filled with odd radio noises and ghost ships.  But that’s not the worst of it, nor is he completely alone.  The island is inhabited by dinosaurs.  And not just a few nice herbivores, but a whole teeming jungle full of deadly species after deadly species of dino life & plant life that seem tailor made to kill small boys.  Surviving the night will be tough, and getting back home again seems like an unobtainable dream.  Poor kid.

But there’s a small ray of hope, and it comes in the form of a wonderfully bright girl named Kathryn.  She’s been on the island for years, arriving in a fashion similar to what befell Lucas, and has been studying the local wildlife ever since.  She has a house, a pet, knows where to get supplies, and also knows how to stay away from the more dangerous occupants of the island.  But Lucas doesn’t want to stay and do research, he wants to get home, something that he’ll need Kathryn’s help doing.  Incidentally, his home isn’t her home, as they seem to come from different times, something that’s all wound up with Lucas’ crystal, some volcanoes, the mist, and who knows what else.  Good luck making it back, guys, and god speed. This is a children’s movie, and can only possibly be appreciated as such and by such.  I’d say 12 might be the prime age to enjoy it; a little humor, some scary scenes, cool dinosaurs, an adventure, kids to imagine yourself as.  It’s a film that could be looked at as a magical Jurassic Park made for a younger audience, a story that’s mysterious and frightening but not gruesome or terrifying.  It was written, directed, and produced by Matt Drummond, a mad who specializes in the visual effects of television documentaries and series, mostly relating to prehistory or posthistory.  He was able to make the film visually appealing, a bit of a colorful land-before-time theme park ride, but with characters.  And so if what you’re looking for is an exciting, slightly accurate dinosaur movie for your tween to enjoy, you’ve come to the right place.

For the rest of us, I’d recommend visiting an island elsewhere.  First, there are basically only two actors in the film, Lucas & Kathryn, and they’re barely actors.  That’s not an insult; neither of them has ever been in anything else.  We’ve all got to start somewhere I guess, but it’s obvious that these aren’t the world’s next great dramatists, and their lack of practice shows in a terrible way.  For an adult, I don’t see how their characters can be forgiven, and even some kids will find problems with the acting from these two leads.  Place them in a jungle with CGI monsters & have them run around attempting to unravel the secret of the island and you’ve got yourself 80 minutes of what amounts to a very bad skit with very good effects.  The story only makes a little sense, no one involved has the talent to help it along, and I think Drummond ought to stick solely to special effects from now on.

Video – With an aspect ratio of 16×9 Widescreen, there’s nothing special about the visual.  The film was shot using a Panasonic AG-DVX100 camera, and only boasts OK video quality.  The effects are the best part of the film, dinosaurs painstakingly & colorfully crafted to come to life on the island.  I could see these images in a Six Flags IMAX movie, but paring them with a weak everything else only succeeded in making the picture quality stand out as poor.

Audio – The disc was done in English 5.1 Surround, with an option of English Stereo 2.0.  There are also two subtitle choices: English SDH or Spanish.  The audio quality of the film is absolutely fine, but nothing to write home about.  The music might be he highlight of the audio, with a pretty nice background track that adds to the intensity of what must be a fairly fun story for a pre-teen.

Extras – The only extras on the DVD are four previews: Dinosaur Island, James Cameron’s Deepsea Challenge, When Calls the Heart, Khumba. Skip It.  I’m not 11, I don’t have an 11-year-old child, and I didn’t particularly want to spend over an hour watching two kids attempt to act while riding pretend dinosaurs.  So I can’t say that I enjoyed Dinosaur Island, and I think I would have chosen to watch the 1994 film again over watching this one once.  It’s a badly made film; can’t be more blunt than that.  It’s actors who don’t act, a director who doesn’t direct, all attempting to make a ridiculous story fit in with some computer generated dino images that someone must be very proud of.  I won’t go so far as to say that this is the worst movie ever, but please don’t try to enjoy it unless you’re young or have a young person in your life that you can be happy for when they’re happy.  The video was nothing special, the audio lackluster, and there weren’t any great special features on the DVD.  So, watch something else; this isn’t one of those kid’s movies that adults can get into as well.  It’s something else entirely; a film made around the visual effects with the movie part taking a backseat to the CGI.  And by ‘backseat’ I mean that everything else but the CGI is terrible.  You’ve been warned.