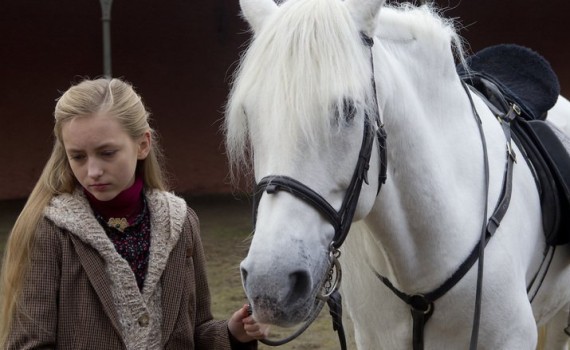 It’s hard to go back in time in your head, remember yourself as 10 years old, and try to predict whether or not a younger you would have liked a movie.  But sometimes it’s necessary, as with The Legend of Longwood.  It’s not a film that will inspire or impress, but perhaps I would have liked if I had seen it on TV in 1993.  It has a bit of a Darby O’Gill feel, something I enjoyed as a child, so perhaps it might have succeeded on that level.  But the question remains; do I need to be younger to appreciate this film or should it be better, 20 years after it might have fit in?  Is it their fault or mine that we didn’t mesh?  I’d like to blame them, that’s easier, and the film definitely opens itself up to criticism, children’s movie or not.  But I’m sure that I’m not completely without fault, bringing my own American adult bias into an Irish kid’s program.  So, I give up, and I’ll just say it no matter who’s to blame; this movie isn’t great. Welcome to the life of little Mickey Miller; it’s tough and it’s about to get tougher.  She lives in New York with her mother, who is a florist, her little brother, and her beautiful white horse.  Two things you should know about Mickey: her Irish father was lost at sea many years ago and she just killed her horse & broke her leg after taking a nasty riding fall.  Mickey holds out hope that her father might return, but her horse never will, and things are gonna get worse.  Her mother just received a house in Ireland as part of a will after the death of an unknown relative.  So the family is moving to Longwood, miles from anywhere, and into a house that’s about as shabby as their lives have become.  Mickey is determined to hate her new home, wondering how her father will ever find her and if she will ever ride again.

Now on to the legend.  Years ago, the lord of the nearby castle had a lovely wife, a daughter, and a happy life.  After the death of his love, he turned evil, dark of heart & of attire, becoming known as the Black Knight.  After his daughter was kidnapped, a fire in his castle killed seven children and the Knight himself was never heard from again.  To this day, seven white horses grace the fields of Longwood castle and a strange presence haunts the town at will.  What does Mickey have to do with all this?  Her amulet gives a clue that her family might be involved in the legend, and her love for the white horses, one in particular, keeps her returning to the castle even when it’s made clear that the Black Knight wants her to stay away.  How much is real, how much story, and how will it end, as the town gathers to celebrate a myth that might be true. The good first.  What a wonderful place to tell such a tale, the green fields of Ireland.  The village, the villagers, the woods, the chilly weather, the colors of the land, the ancient castle, the horses; it all combined to be one phenomenal set piece, a place where a story like this was meant to be played out.  Add in the accents of the locals, the newcomers to the town, the grisly legend, and you’ve got a story that was meant to be told around a fireplace in a cottage on the Emerald Isle.  And the characters were cleverly crafted; Mickey the sad girl, Sean her new friend, Hernanda the gold-digger, Lord Dumonceau the heir to the castle, Mayor Wicklow the creep, Lady Thyrza the chronicler of secrets.  It’s a great cast, a cool story, a wonderful setting, and a movie that’s ripe to become a childhood favorite.  Too bad I’m not a child.

And I try not to judge it too harshly, knowing that it wasn’t exactly made more me.  But it was made for audiences, that includes me, so I should be pleased too, and I’m not.  Not exactly, anyway.  A few very specific problems marred what could have been a pleasant kid’s movie.  For one, the main kid wasn’t strong enough.  Lucy Morton played Mickey, her first notable role, and I have to give her all the credit in the world for taking on the unrivaled lead in a difficult film.  But (sorry Lucy) she wasn’t ready, she just wasn’t ready.  From her facial expressions to her down moments, there were flaws there that can be fixed with time but that aren’t perfected yet.  Looking off camera when you’re not supposed to, being invested in every scene whether you’re talking or not; these are things that actors need to learn about and need to learn about quickly.  Other than Morton, the main problem with the film was the tightness of the story arc.  I wanted to yell “focus!” at the screen so many times, as events started unraveling faster than anyone involved could keep up with and nobody was there to round up the troops.  A crooked mayor, an Irish song, a hidden book, a family secret, a building permit, a car race, gravestones, clue poems, bullies; I could go on & on, but I won’t, and the film shouldn’t have either.  Too much plot, too little acting prowess, and what you get is a film that adults can’t love and perhaps only children can forgive.

Video – With an aspect ratio of 2.35:1 Anamorphic Widescreen, the video quality stands out as a bright spot of the film.  The colors and the landscapes of the Irish countryside were brought to life very well and with a high clarity, with a crisp picture and great use of camera.

Audio – The film is done in English Audio with an option between 5.1 Dolby Surround or 2.0 Dolby Stereo.  There are no other audio options or any language choices.  The sound quality of the DVD was fine, with nothing to excite those looking for high technical prowess.

Extras – There is only one bonus feature on the disc; a 13-minute featurette, with behind the scenes moments and interviews with cast and crew. Rent It.  I don’t want to be overly critical of a film that never aspires to be the next Ben Hur, but I can’t stop myself from picking it apart just a bit.  Some editing of the storybook would have been nice, and a little more experience under the belt of the main actress would have gone a long way.  So there’s nothing perfect about The Legend of Longwood, but there’s also a good bit that I’m sure a good many people could enjoy.  The story is captivating, the setting is great, and the Irish feel of the entire project is something American audiences could love.  It’s just not something I can love as a critical adult, and probably is something that seems much better to the people involved than to those sitting down to judge it.  The video is very nice, the audio fine, and there aren’t many extras.  So enjoy with your kids, don’t expect much, and try not to be bothered by the lack of focus.  There’s something to love here; it just didn’t win me.