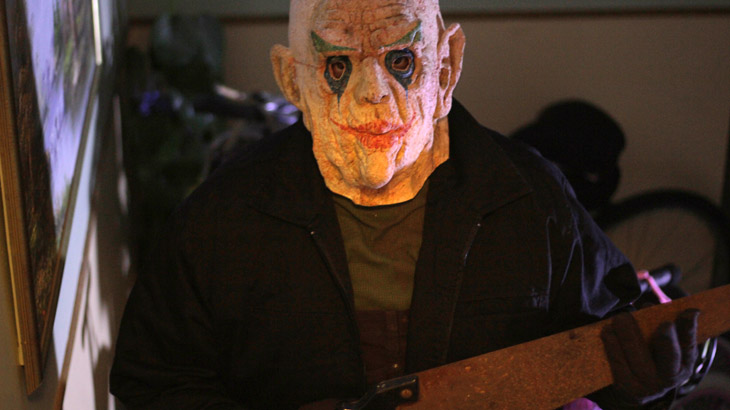 I won’t insult horror aficionados by saying that I am one, because I know how seriously they take the love of their genre.  I’m more of a sci-fi guy myself, though I have watched my fair share of slashers, but I in no way understand the depth of the devotion it takes to be a horror super fan.  I don’t know of any other genre that has the cult following that this one does, the sheer number of obsessed enthusiasts, the collectors of the most obscure memorabilia & lore.  Maybe Star Wars nuts, but that’s something totally separate, a LARPing spectacle that can’t be explained.  No, horror is the most fervently followed of all film, and although I enjoy it from time to time, I’ll never totally get it.  For an audience that enjoys their nostalgia, Blood Slaughter Massacre must be a nice collection of dated ideas brought together for one last thrill ride.  But for those of us who don’t know all the history, it can’t possibly be as meaningful as it was meant to be. I’m not sure anyone really understands the plot of this film, including the people who made it, and that’s probably how it was meant to be, so stay with me while I try to explain a story that, on purpose, makes absolutely no sense.  Ten years ago, a masked killer took out a whole party of townsfolk, including a respected judge.  The first on the scene were a pair of young troopers who survived the encounter, but would remember that fateful day for the rest of their lives.  The killer was out for revenge after the death of his daughter, and his mind was on only one thing; blood.  The town, the police force, the families of those slain; no one would ever be the same, and no one would be safe ever again.

Fast forward to the present to a time where most everyone has forgotten about that terrible night, except for Detective Fincher and his partner Cobb, who are now investigating the murder of a young girl.  Actually, it quickly becomes a string of murders, and Fincher begins to wonder if that old killer is back for more.  As he kills young woman after young women, it becomes apparent that he wants something, something he has lost, and murder is the only way he knows to get it back.  Fincher & Cobb must work to solve the case before more innocents die, including Fincher’s own family.  The descendants of those who were involved in the case pertaining to the dead girl ten years ago are turning up dead, and the masked killer will stop at nothing. Whew, that was work.  It makes absolutely no sense, and each added piece of information only adds to the confusion.  Something about a man who was abusing a girl, an accident, a case that wasn’t prosecuted, someone that died, and then a whole lot of stabbings & slicings.  I have to imagine that the story was a homage to the nonsensical horror plots of the past, as the entire film was an intentional nod to the 70s & 80s.  Halloween is the most honored, with the masked-killer, the slow walks, the screaming girls, the dead babysitters, the knives, the small-town cops, and the music.  If you’re a fan of the genre, this film shows respect for the slashers that came before and attempts to offer up a blood sacrifice to the horror gods.  It’s not a mockery or a spoof, it’s an honest declaration of love for the style, and from what I’ve seen they hit the nail on the head.

But, like I said, I’m not obsessed with these movies.  I didn’t grow up watching the Friday the 13th films, I don’t know all the reference here, and I won’t forgive anything if enough people are gutted like fish.  The acting in this film was absolutely horrendous.  It was like a high school documentary about the bad choices every single person in a 10-mile radius was making all at once.  It was the worst camera, worse characters, a terrible story, and a pitiful attempt at anything realistic.  But we’re back to the main point; it was all a bit on purpose.  There are two opposites at war here; on one hand we have a film that’s a complete love-fest to the genre, purposefully cheesy & bad, and on the other hand those who can’t appreciate that fact are just left with a product that’s a completely abysmal film, cheesy & bad. Video – With an aspect ratio of 2.35:1 and shot on a Canon 60D camera, the video quality of Blood Slaughter Massacre is even worse than the 70s & 80s films it pays homage to.  The camera work is a cross between shaky hand cam and your mom’s video cassette recorder from 1977.  Again, intentionally so, but that doesn’t help your eyes when nothing is in focus or in good color.  The picture quality feels like something from the era the film is referencing, that’s to its credit, but a little modernization would have been greatly appreciated.

Audio – There are zero audio options on this disc; no language choices or subtitles, formats or surround/stereo options.  The sound quality is whatever, not as noticeable bad as the video, but not much greater than what you’d capture on said mom’s old camera.  And the soundtrack was just so-so, not the 80s spectacle that it could have been.

Extra – There are a ton of special features on the DVD.  The film can be watched with commentary by writer/director Manny Serrano, writer Louie Cortes, and producer Lindsay Serrano.  There are four deleted/extended scenes: Answering a Noise Complaint, Fincher’s Depression, At the Video Store, What Does Danielle Do?  There are 14 minutes of Behind the Scenes and Outtakes.  The original Blood Slaughter Massacre trailers are available to view.  ‘Demons of the Night’ is a music video by Midnight Flashback.  And lastly, there’s a trailer for The Attack of the Brain People. Rent It.  Here’s what this movie is: slasher appreciation, boobs galore, fake intestines, and a general nod to the fantastically awful films of the past.  Here’s what this movie isn’t; It Follows.  That may be what it was shooting for or it may not, but that film was a success because it took the old style, made it cool again, and reminded us what’s really scary.  Blood Slaughter Massacre is more farcical, just say its name aloud, but I could have done with more of an effort to make something that wasn’t just for horror fans.  As it is, you’d better love the genre to love this movie, otherwise it’s just another mean serial killer in a mask sticking his knives into people’s bellies for fun.  As someone who has at least some appreciation for the style, I get what’s going on, but I can’t force myself to stand up & cheer.  The video quality of the film is terrible, the audio almost as bad, but there are a lot of extras if you’re thirsty for more.  Decide which camp you pitch your tent with before you sit down to watch this movie; it’s not one that most people will rate somewhere in the middle.