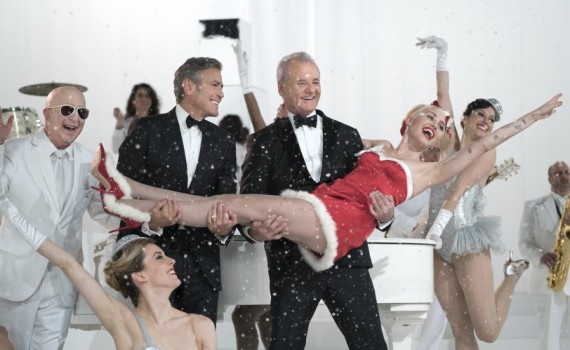 I was primed to love A Very Murray Christmas.  After all, Christmas is the uncontested best holiday of the year, I love musicals, and Bill Murray is a comedic genius.  Combine the three and you have a special 1-hour film that should become an instant Christmas classic, right up there with Rudolph, Frosty, and The Grinch.  And while enough people saw it exactly that way, it struck me as the complete opposite; one of the worst movies/specials/musicals I have ever seen, holiday themed or not.  Average singers pretended to be in a blizzard for 60 minutes, got drunk, took turns at the mic, and rattled off lines that rivaled the wit of a skit put on by a 6-year-old.  By the end, I began to wonder if anyone had rehearsed this strange play before putting it on, or if Murray had just called some friends last minute and asked them to come over for some booze.  Either way, I won’t be watching this bad experiment again.

So Bill Murray is hired to host a Christmas special in New York, a variety show where he’ll sing, dance, schmooze, and lead some celebrities toward some camera-worthy moments, making the network some money & showing at-home audiences a good time.  He’s all ready, he & his buddy Paul Shaffer, piano sitter & creepy looker extraordinaire, so all that’s left is for the guests to arrive.  But a freak blizzard shuts down the whole city, meaning that no guests can make it.  And when the power cuts out, no one can watch on TV either.  So the night’s ruined, or is it?, as a variety of odd characters begin showing up and singing Christmas tunes.  Memories are shared, morals learned, drinks toasted, and everyone pitches in, making this holiday night one that they will never forget, if one that went nowhere near according to plan.

So, the set up first, which is weird, but makes sense in a variety show kind of way.  People flit in & out, sing songs, there’s no real plot, but there doesn’t really have to be.  What matters is the singing & the humor, creating a fun atmosphere in which to have a few laughs.  Unfortunately, everyone involved was terribly untalented & unfunny.  Bill Murray himself, who I love, was awful, with dumb jokes and a mediocre signing voice.  He & Chris Rock sang all the versus of “Do You Hear What I Hear” and it was as painful as you can imagine.  Then Maya Rudolph sang, and she as even worse, murdering every high note she was given.  But it didn’t end there, oh no.  Murray passes out, dreams of George Clooney & Miley Cyrus, and puts on an imaginary show with them.  Every scene is worse than the one before, grating on your mind until you look around at the nonexistent others in your living room to ask them “what is going on?!”  I did like Jenny Lewis & Phoenix, they sounded great, but everyone else in the film had a bad voice by professional, on-air standards and the cameos were completely idiotic: Amy Poehler, Michael Cera, Rashida Jones.  It was as if Murray had a dream to do a variety show, paid to make it happen, and didn’t care if it was any good.  Talentless singers, a dumb script, the most boring Christmas movie ever; it went beyond not being good and became the worst thing I’ve seen all year.  And on one final low note, Sofia Coppola sucks.  Goodnight.