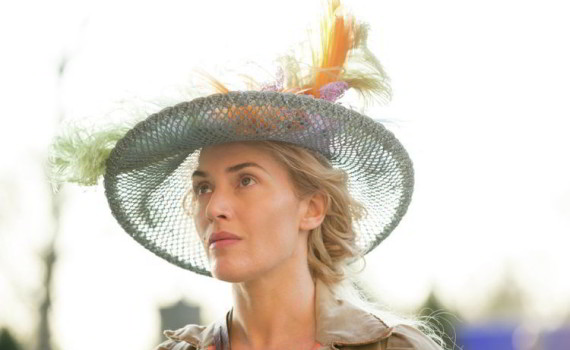 Alan Rickman directed a film in 1997 called The Winter Guest, starring Emma Thompson.  And that’s it, that’s the only time he attempted directing, although he of course made a great career for himself as an actor in countless films, some of which remain untouchable classics to this day.  Die Hard, Quigley Down Under, Robin Hood, Sense and Sensibility, Harry Potter, Love Actually, Sweeney Todd, The Butler; Rickman started out as the villain and ended up being so much more.  His ability to slide right into period pieces is just another one of his many talents, and with A Little Chaos, he would even take on the role of director once more.  Since it can only be assumed that acting comes easily to him these days, the challenge of directing must have been a welcome enterprise.  And, for an amateur, Rickman succeeds in bringing a beautiful story to life without too much opulence, or at least, no more than what was called for. Landscape architect Sabine De Barra sees beauty in disorder.  The lack of control consoles her, as she feels that order has abandoned her life rather abruptly in the form of a tragedy that haunts both her days and her nights.  Her talent for plants and artistic vision keep her focused and alive, giving her a reason to produce beauty out of chaos, sense out of the randomness of nature.  Madame De Barra is called before Andre Le Notre, a Master Gardener, when he receives orders from the King of France himself, Louis XIV.  A palace is to be built in Versailles and many landscapers are needed.  De Barra’s unique vision will be a bright though unorthodox light shining on the formality of the ancient traditions, and her ability to imagine what others cannot will set her apart as a woman with a special gift for both natural grace and modern foresight.

But the court of France is not a place for the meek or unskilled, and De Barra will soon find herself in dangerous waters.  She quickly becomes a conversation piece, with many parties eager to grab hold of her and learn her intentions.  Some are friendly and some are not, creating a whirlpool of social politics that can suck you down before you have a chance to breathe.  Le Notre, a married man, finds himself falling for De Barra, and she him.  But, although a culture of infidelity prevails in the court, the pair are kept apart by a jealous wife and an inability to move beyond the ghosts of failures past.  As De Barra’s garden reaches its completion, her relationship with Le Notre will come to a breaking point, as will her unorthodox style as it meets with the King’s possible disapproval.  Chaos reigns in this tight-knit aristocracy, perpetuated by one strange, compelling, brilliantly original woman. In only his second attempt at directing, Rickman manages to capture the period piece genre in a small bottle, hold it up to the sparking light of day, and allow us all to enjoy what it so beautiful for a fleeting moment.  The dress, the sets, the court, the tradition; it’s all so very French, so very storybook, and can be very entertaining & transportive if we let it carry us away. Rickman directs a solid representation and a classic love story, complete with men’s wigs, women’s corsets, King’s mistresses, and everyone’s fragile dreams.  It’s a film that fits into a category and won’t be called an amazing spark of unique creativity, but what works in its favor is just that; comfort, predictability, a nod to all that came before, and an admittance that love stories aren’t original, that we’ve seen it all before and perhaps that’s OK.

So the movie works, the story flows, and classic climaxes occur.  But what holds this film back from greatest is the success of its parts.  Rickman as King Louis is perfection, and his one conversation with De Barra is the highlight of the whole thing.  Winslet, herself no stranger to a period piece, pulls off a difficult role, a woman at odds with herself, trying to fit into a world in which she obviously doesn’t belong.  And Stanley Tucci, in a small part, shines as he always does.  But the love story, which should be the strongest link in the chain, failed to take hold.  Schoenaerts was a poor hero, never felt believable, and was perhaps the dimmest light in the cast.  His affection towards Winslet never felt honest or natural, as the two seemed such an unlikely pair from the very start.  Had they made a connection, the film could have been a great success.  As it was, the movie succeeded in its attempted message, but the leading couple failed to win my heart.

Video – With an aspect ratio of 2.40:1 High-Definition Widescreen 1080p, the video quality is perhaps the highlight of the film.  Shot using an Arricam LT camera with Cooke S4 & Angenieux Optimo lenses and an Arriflex 235 camera with Cooke S4 & Angenieux Optimo lenses, every image is superbly captured on the Blu-ray disc.  The picture quality is excellent, with a great use of color & depth, high clarity in every shot, and a story that was meant to be presented using this media.

Audio – The Blu-ray was done in English DTS-HD Master Audio Dolby Digital 5.1.  The menu gives a choice between English SDH, Spanish, or French subtitles, with an option to turn menu toggling sounds on or off.  The sound quality of the film was excellent as well, with a great use of period music to begin almost every scene, and an emphasis put on dialogue that showed audiences how important each carefully crafted word was to the general mood of the movie. Recommended.  Forgiving a relatively small number of flaws and understanding his lack of directing experience, Alan Rickman created something solid here.  It’s not like he’s inexperienced in the field, and so perhaps he doesn’t deserve any forgiveness, but even without glancing past a few mistakes, A Little Chaos is a fine film.  It’s stopped from being fantastic by a love story that won’t capture many imaginations nor fill many heads with romantic longings.  Putting it bluntly and pretending this is 1997, they were no Jack & Rose.  That may be a cheap shot, but that’s the kind of love I wanted from a film that was trending towards such beautiful things, and that’s what held it back from taking me from fan to follower.  The video, however, was exquisite, with the audio not far behind, although there were no extras to be had on the Blu-ray disc.  I recommend this to the period piece aficionado in your life, who will love the way it looks at the very least and just might believe the lovers more than I did.