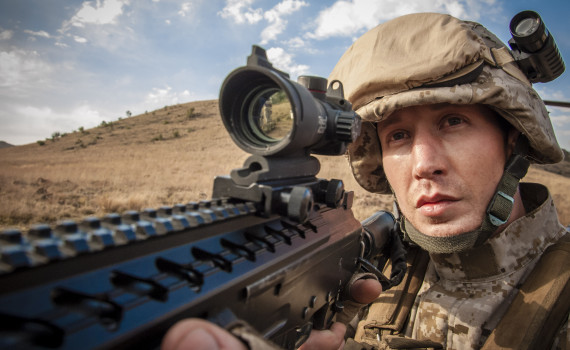 When I heard the name ‘Adrian Paul’ attached to this film it took me a while to think of who that was.  Then it hit me; Highlander!  Adrian Paul played Duncan “Mac” MacLeod on the Highlander TV series for 7 years, and what a show that was.  12-year-old me loved watching Mac chop the heads off of other immortals after saying “There can be only one!” and then seeing their power transferred to him to end each episode.  It was an awesome show, a cool premise, came from movies, spawned more movies, and still stands out as a prime chunk of my childhood.  So I was excited to see Paul fight some aliens, and hoped for at least a little nod to the show I used to love.  But, as it turns out, someone tricked me.  Adrien Paul is the voice of a commander over a radio, nothing more, and only has about two lines.  He doesn’t fight anyone, doesn’t even show up, and, really, that left me more disappointed than it should have.  So what we have is a “documentary” about humans fighting marooned extraterrestrials, with no quickenings whatsoever.  Bummer.

Here’s a little future history, as it were, an explanation of the events that have happened that will happen.  Stick with me.  In 2021, aliens invade our Earth.  They drop from the sky unannounced and begin a global attack that should wipe out the human race.  These ‘Heavies’ are big, tough, armored, have lasers, and seem hell bent on destruction.  But mankind in not a placid species, and we fight back.  Using technology engineered on the spot and allying the entire world against one enemy, we were able to beat back the aliens.  We figured out their armor, took the fight to their mother ships, showed them what we were made of, and won the war.  The Heavies retreated, leaving our solar system for what we hoped would be for good.

Now, 10 years later, the world has all but forgotten about the Heavies, protected from a second invasion by a global weaponized satellite force.  But not all the aliens are gone.  Some were left behind when their race fled Earth, marooned on our planet with dwindling supplies and little chance of seeing their home again.  Outposts were created around the world to hunt down the remaining Heavies, but slowly they began to lose funding & publicity as the threat lessened.  Now, at Outpost 37, only a few soldiers remain, serving their elongated tours under constant threat from hostile locals, seeing Heavies only occasional, and generally lacking any real mission other than to stay put.  But the aliens are regrouping, planning something big, and will require much more than cursory attention very soon. Once I got over the fact that the Highlander wasn’t going to jump in, swing his sword, and save the day, I rather enjoyed this movie.  Or, more specifically, I enjoyed what I could and tried to ignore the extremely poor quality of the rest.  The story is presented as a documentary, with “live” footage and followup interviews, putting a face to the squads that fought the first war and the men who carry on the battle even though no one is watching.  There is actually a lot being said here, about soldiers and their popularity, and wars that never end, about the support at the beginning and the quick forgetfulness for the men who must clean up the mess.  The action is even set in the Middle East, with familiar equipment and arms, with a plot that is too reminiscent of actual wars, with a little sci-fi throw in for entertainment.  Looked at in that way, Alien Outpost is a film with a message.

But, looked at with even a slightly critical eye, the film falls apart.  The production value is very low, with a found-footage feel and a sense at times that a bunch of guys got dressed up in camo for the fun of it, filming themselves pretending to be scared of aliens.  The Heavies themselves were a little silly, the story behind their recommunication pretty ridiculous, and the firefight scenes coming off as neither choreographed nor sensical.  And then there was the acting, which was bottom barrel, perpetrated by dudes you’ve never seen before and probably won’t see again.  In all technical ways, Alien Outpost was a failure, a film that seemed cheap and late-night but without the humor or adult content to distract audiences.  But if you can ignore the delivery, the point, at the very least, is something that you can hold on to and try to make important.  Either way, there’s still no Adrian Paul, and that stings. Video – With an aspect ratio of 1.85:1 Widescreen 1080p High-Definition, the video quality should have been better than what it actually was.  Much of the footage was supposed to be shot by hand-held cameras, so there was intentional blurring of images or shaking when there were explosions, jolts of static on purpose for various reasons.  So whatever high quality the Blu-ray disc allowed was compromised by the style, with only the occasional well-shot scene or crisp video image.

Audio – The Blu-ray was done in English DTS Master Audio 7.1, with an option for 2.1 DTS-HD MA as well, and three subtitle choices: English, English SDH, and Spanish.  Also, audiences can watch the film with audio commentary by director/co-writer Jabbar Raisani and director of photography/co-writer Blake Clifton.  The sound quality never impresses, with dialogue taking up the majority of the time and explosions filling in the gaps.  The film is technically disappointing, with no standout features.

Extras – There are a few Bonus Features on the disc.  Interviews with Cast and Crew: 16 minutes of behind-the-scenes footage and interviews.  Deleted Scenes: two scenes totaling 3 minutes.  And Theatrical Trailers: 2 trailers for the film. Rent It.  For a low-budget action film, Alien Outpost at least starts with a solid base and an honest message.  From there, the content gets a little crappy, the talent never rises to the occasion, and the technical inferiority of the film becomes too much of a focal point.  It doesn’t come near approaching a movie like Edge of Tomorrow, but of course not, and in order to enjoy it at all you’ll have to forgive the vast majority.  There is a moral here I guess, though it’s buried beneath machismo and armor, so you’d have to dig deep if you’re interested in finding it.  Deciding whether it’s worth the work is your call.  The video isn’t wonderful, the audio only passable, and the disc carries only a few extras.  This is a film that can be missed, but isn’t totally without merit.