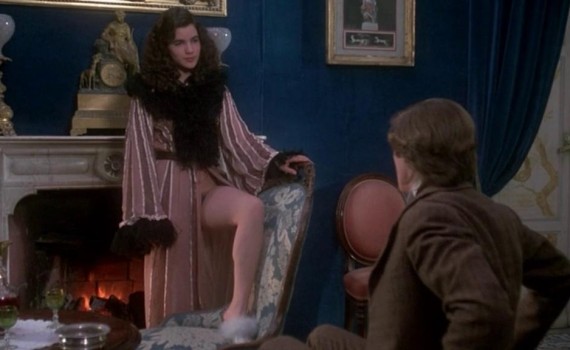 Would you like to see Moulin Rouge but with sex? Well, this isn’t it. However, Nana is Moulin Rouge with nudity, and that’s something. Dan Wolman, director of the notorious Maid in Sweden, brings us another campy & irreverent “erotic” drama in which a young woman enters the world of sex only to find herself in over her head.  It may not be the just-for-couples movie that it tries so hard to be, but it at least succeeds in becoming a soft-core, late-night romp, one that might have been risque in 1983, even if it seems a little ridiculous in 2015. Having been born in the same year as this film was produced, it’s hard to imagine what it might have been like at the time, but perhaps it was at least enjoyed by some pubescents. Nana, oh Nana (which is hard for me to type knowing that I actually have a nana), wherefore art thou Nana? This lovely young girl newly arrived to Paris is about to take the city by storm and take the heart of every man within a carriage ride. Every man would probably enjoy doing things to her similar to what you can witness if you. She begins by starring in erotic moving pictures, shows that arouse the men who frequent a local bordello. Soon she has become a “loose woman” of the establishment herself, catering to the needs of the wealthy businessmen & politicians who are only too willing to part with their money in exchange for some alone time with Nana, the girl everyone desires. But with her new-found popularity comes some pretty tricky predicaments, some pleasurable, some uncomfortable, but all negotiable, at least for a clever girl like Nana.

She begins by taking up with a rich banker named Steiner, a man who adores her and will give her anything she desires, including a house of her own in which to keep her. But when Steiner becomes boring, there are other men handy to occupy her time and fund her lifestyle. Why, next door is a Count named Muffat, who can’t seem to stop thinking about the lovely Nana and will even go into debt to buy her what she wants. His own son Hector is no less interested in the beautiful girl, even endangering his engagement to please her every whim. And let’s not forget Satin, a seductive woman who wants to show Nana the joys of the fairer sex. Everyone wants something from Nana, and she wants the world from them. Based loosely on the works of Emile Zola, Nana is a dramatic example of late-1800s Paris and the lavish lifestyle that was available; to men, assuming you could pay, and to women, assuming you were willing to sell your body. There is a lot being said in a very short span and set against a backdrop of depravity. Rich men throwing away what comes so easy to them in order to get something that decidedly does not. Beautiful women ready to show everything, to be unceremoniously used, in order to make a living. And the lucky, exceptional few who play their cards right and begin to control those who started off controlling them. It’s a picture, though not a very pretty one, of a very specific era; a time when homosexuality was a wicked secret, when bordellos were all the rage, when dark-skinned men were treated as beasts, and when money was traded for happiness.

That’s about as serious as Nana can be taken, and really, those themes are there if you’re looking for them, but on the surface this film is about one thing: boobs. Well, boobs, some thrusting, some head-bobbing, fox hunters chasing nude women through the woods, Nana taking baths, Nana wearing diaphanous robes, Nana generally being very available to whomever might knock on her door. The film has a strong Tinto Brass feel, if you’ve ever come across that master of Italian erotica. My only experience is with Black Angel, which is a bit more explicit than Nana, but has more of a love story. Both have at least a little historical context, which makes them watchable despite the over-sexed scenes and ridiculous characters. But Nana is not quite erotic, not quite mainstream, becoming a film in limbo, a movie that paints a picture of an era but doesn’t exactly know how hard to give it to us. It’s not sexy, though it’s filled with sex, making it a gratuitous period piece perhaps, but not a great film. Audio – The audio of the DVD was produced in Mono, with no language, subtitle, or sound options of any kind. The film actually feels dubbed, though I don’t believe that to be the case. The sound is just a little off from the movements of the mouth, giving it a French-to-English feel that isn’t actually true. Otherwise, the music is actually quite good, or at least well placed, giving themes to certain scenes in a vaguely operatic manner.

Extras – There are no extras or special features on this disc. Actually, there is no menu at all. Rent It. It’s hard to hate Nana; the film tries so hard to win you over that you find yourself hoping it will succeed. It doesn’t, not really, but it get’s an A for effort. It’s a film in between styles and ratings, a farce/period piece that’s sexy/absurd. Perhaps it deserves credit for becoming a genre of its own, but Nana never quite commits one way or the other. Is it going to make a point, turn us on, go tongue-in-cheek, entertain? In the end, it became an attempt at many things, but not a success at much. The video is so dated it hurts, the audio fine, and there are no extras or menu options on the DVD. If what you’re looking for is campy sex, Nana doesn’t quite deliver as in-your-face as others. If what you’re looking for is an adult version of a classic tale, it also doesn’t quite meet that definition. So what is it exactly? I guess that’s hard to say, and I doubt watching it will really clarify very much.