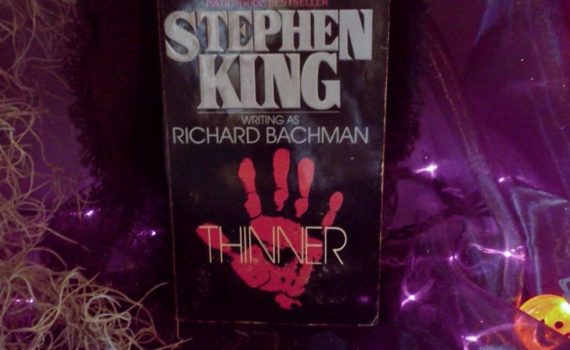 Thinner was published 10 years after King’s first novel Carrie, and it was the fifth novel he’d released under the pseudonym Richard Bachman.  Actually, the first four were novellas and would later be collected in one book, which would make Thinner the second Bachman, although it too could be considered a novella, and perhaps should.  In a way, it’s too short to be a novel, to bloated to be a novella, so it lands somewhere in between, which is a very awkward place to be.  It either needed fleshed out (no pun intended) or trimmed down (again, my apologies), because it doesn’t work perfectly in the space it was edited to fit.  That’s my two cents, but King is the master, and I enjoyed this story no matter the mistakes.

Billy Halleck is an overweight lawyer whose life has become as comfy and careless as his eating habits.  He’s a pretty big deal now, commands some local respect, lives on a nice street, has a pretty wife, no real problems to deal with, and it’s starting to make him a little lazy.  But one tragic event wakes him completely up, and will set the tone for a deadly downward spiral.  Distracted while driving, Billy accidentally hits and kills an old Gypsy woman who was part of a group of vagabonds who recently rolled through town.  It was a mistake, Billy gets off without even a slap on the wrist, but the Gypsy pater familias isn’t so forgiving; he not only puts a curse on Halleck but on all involved in what he sees as a coverup.  Now Billy is losing weight at a tremendous pace, which seems OK at first, but soon turns dangerous, and leads him far away from the white picket fence life he had grown so accustomed to.

That’s really the only big problem with Thinner, it’s too blown up, it’s not that complicated of a story, yet it goes on in detail much farther than it needs to, and with a secondary character who we simply didn’t need to hear from and/or focus on.  The book would have been a better short story, with only Billy mattering, with only Billy narrating, with a quick resolution that creeped us completely out; that tale was there, it was just covered up with fluff part of the time.  Again, that’s my main critique, the rest was really cool.  Great detail in the setup, a nice mood, a very unusual story, not really scary in the least, just weird and concerning.  And, unlike some other King books, this one ended very well I thought, dark and concise and meaningful.  Read for a quick escape and a fun freak out, but know that this isn’t upper echelon.