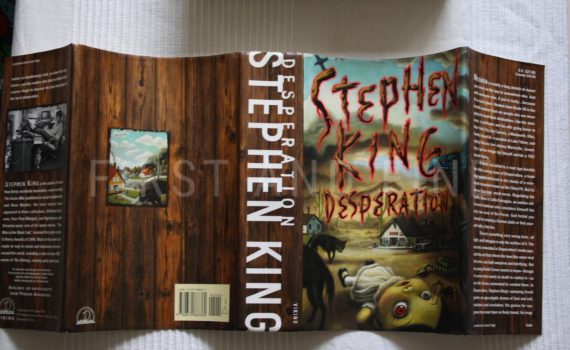 Being called a poor-man’s Stand shouldn’t be a compliment, but somehow it applies perfectly to Desperation.  It’s both smaller and just as large as The Stand, a condensed version of the cross-country battle between good and evil, yet somehow telling the same epic tale and taking a ton of pages to do so.  It’s a long book and about something broad, but it’s boiled down to a day or two and set in one little town, like a microcosm of danger and fear that lost none of its potency in the shrinkage.  I don’t know, maybe that doesn’t make sense; basically Desperation is also amazing, in a similar way, but holds its own with a unique telling, which are all wins in my book.

Seemingly at random, travelers across the great state of Nevada are stopped as they approach the mining town of Desperation and are taken to the local jail.  The cop in charge is Collie Entragian, who seems to be loosing his mind but also breaking down physically as well.  As he captures drivers with lies and traps, they begin to realize that this might not be a simple case of lunacy; the town itself seems cursed, and the wild animals seem to have joined forces with Entragian’s strange presence.  A boy named David, whose whole family was taken and who has recently “found God”, has a direct connection to a power of good which looks to be on the side of the prisoners.  Their trust in God (or whoever might be guiding David) will see them through many deadly situations on their way creeping out of town, but not all will make it out, and not all will keep their humanity.

I feel like this is a novel that few have heard on, not like The Stand, which is obviously one of King’s greatest and most widely-known works.  But Desperation in almost as good, and holds a ton of similarities.  It’s a larger-than-life struggle against a general evil, with God on the outside looking in and with frequent advice through unlikely sources.  It’s violent, it’s terrifying, most won’t make it through, but it’s the journey that’s fun to watch, even if this one is small in comparison to some others.  That’s the point; it’s smaller but it’s not, which is hard to describe, I guess you’ll just have to read the story.  King knows how to introduce us to a dozen characters but make them all count, and then kill them off right when we were getting to like and know them.  His style is brutal and personal, but that’s where you find the magic, and there’s magic through every chapter of this shocking book, more so because you never really saw it coming.